S.E.T. entertains audiences with Calling Ida and The Awakening 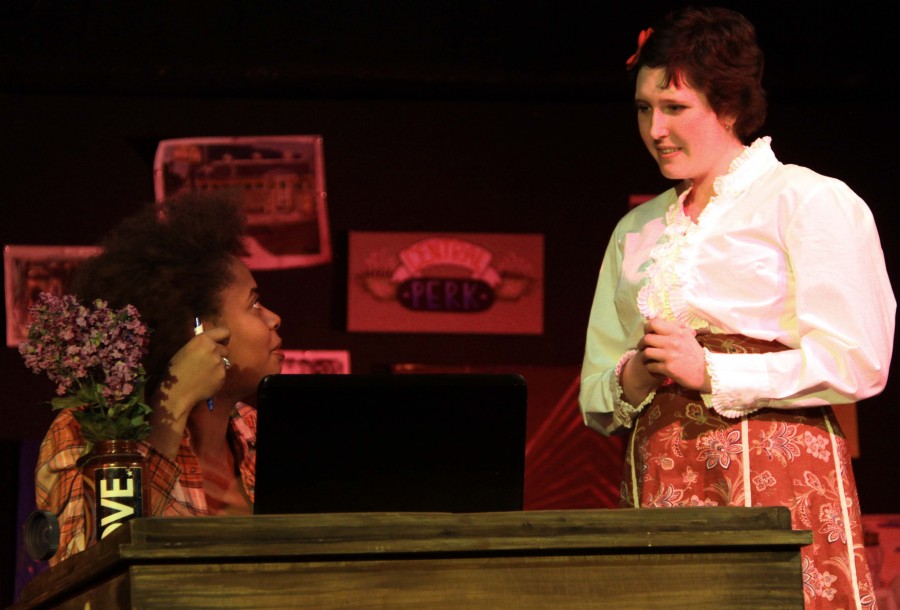 MEGHAN HAYMAN/THE CAMPUS Imani Prince, ‘16, and Rebecca Dilla, ‘14, perform in Calling Ida, a one act play written by English professor Ben Slote and directed by Duane Horton, ‘14. The play ran on April 17 and 18 at 8 p.m. in the little theater in Arter.

The Awakening/Calling Ida was two one-act performances by Allegheny’s Student Experimental Theatre (S.E.T.). Calling Ida was performed first, which was a play written by Associate Dean and Professor of English Benjamin Slote.

Calling Ida revolves around a comping senior named Jeannie, played by Imani Prince, ’16, who finds an article already making the same argument as her comp. With her comp due the next day, Jeannie is at a loss as to what she should do.

This is when she encounters Ida Tarbell, an historically significant journalist and alumna from Allegheny College. Tarbell is known for beat reporting on John D. Rockefeller’s oil industry.

With help from Tarbell and a few other characters, Jeannie switches her major, comes up with revisions for her comp, and is inspired for her future.

The idea for Calling Ida emerged for Slote after he was asked to write about a recently composed article. That article focused on all of Tarbell’s old books that she donated to the college. After reading up on her, Slote began to feel that the personal sense of Tarbell was dissolving and she was just becoming a figure.

“I wanted to make alive Ida Tarbell and that she went here,” said Slote.

Once Slote finished the Calling Ida script and was advised by professor and managing director of the theatre Beth Watkins to have the Calling Ida piece performed, Slote submitted his writing to the theatre department. Although there was a reading of Calling Ida last summer, S.E.T. performed it for the first time.

Completely uninvolved in the actual production of the piece, Slote was very thrilled with how director Duane Horton, ’14 and stage manager Katie Beck, ’14 brought Calling Ida to life. The performance was funny, insightful, and personal to the Allegheny community. It will be performed again at the Allegheny Reunion ceremony on May 29 and May 30.

The second act, called the Awakening, was split up into twelve readings centered around the theme of an awakening.

The thematic value of each performance was the only thing that related them to each other. The mood ranged anywhere between comedic, reflective, sad, insightful, and shocking. Many of the readings centered around the idea of growing up in that the reader experienced either a demand for maturity or a loss of innocence. Others were reflections on socioeconomic status, life-changing decisions or government.

In more lighthearted pieces, there was a focus on the idea of being in stressful situations. The writers and actors made these pieces comedic, such as trying to survive blisteringly hot days and neighbors who can’t keep quiet at night.

Lance Claflin, ’14, was a director and performer in the second act. Although he said it was a challenge for him to balance his comp and many other activities with this performance, he couldn’t have resisted getting involved.

“This was the last thing creative I could do before leaving. One last hurrah,” Claflin said.

Spencer Vicente, ’15, enjoyed the variety of people in all of the different performances.

“The best part was meeting new people and seeing how talented they were,” he said.

The large audience that attended S.E.T.’s The Awakening/Calling Ida event were responsive to both acts and ended the night with an enthusiastic applause.