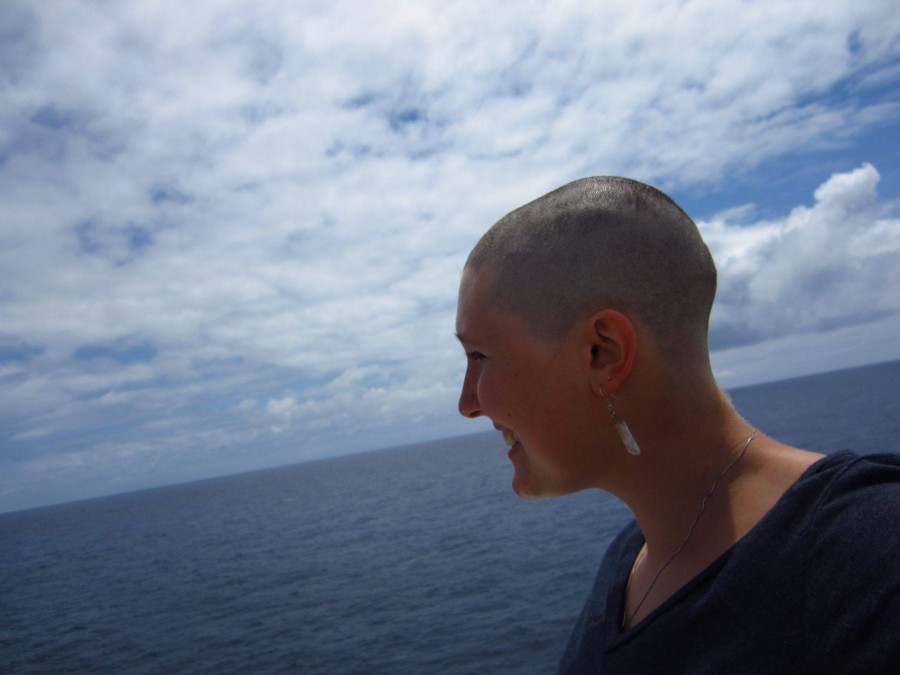 COURTESY OF REBECCA DILLA Semester at Sea has a tradition that as the ship crosses the equator, the passengers (students) shave their heads and celebrate. Rebecca Dilla, ‘15, chose to shave her head and take part in tradition.

“Can you tell us a story about the stars?”

We were lying on a sand dune in the Sahara desert, my four friends and our Bedouin guide, looking at the stars. It was a new moon, and the stars were brighter than I had ever seen them. The camels we rode to our campsite were below us, their sleepy herd of heads and humps barely visible in the night. The campfire was behind us, dancing light across the dunes. The Bedouin people are traditionally nomadic herdsman, though our guide and his family would sometimes lead tours to the desert to make some extra cash. He began his story:

“My ancestors, my people, the Bedouin, they have always lived just as you and I are now–the camels, the fire. Moving from place to place. They slept each night with the sand under their backs, and the stars above, living just as we…”

Then, his cell phone went off. We never did get to hear the story about the stars.

Last semester, I climbed a mountain through the rainforest in Brazil, kissed the Blarney Stone in Ireland, woke up in Marrakech to the muezzins calling the Morning Prayer from the minarets of surrounding mosques, danced at the University of Havana with Cuban college students, ceremonially shaved my head when I crossed the equator, scaled Table Mountain in South Africa, watched the sunrise from a riverboat on the Amazon, and learned how to surf in Lisbon, Portugal.

No matter how long I’ve been back, it still feels like a dream anytime I tell someone about it.

I was studying on Semester at Sea, a floating university aboard the repurposed cruise ship the MV Explorer. A typical study abroad program gives students the chance to experience life in another place–studying there, living there, either at a university or with a host family. You become a part of the community.

Semester at Sea gives a slightly more nomadic experience. A fellow voyager made the analogy that a traditional study abroad program is a bit like ordering an entrée, while Semester at Sea more like having tapas, getting just a bite of each new place.

For 115 days we called the Explorer our home. Over 80 different courses were offered on the ship, from Celestial Navigation to Medical Anthropology. The 600 other students on my voyage and I took classes at sea from university professors, studied in our cabins or by the pool, and ate our meals outside on the deck when the weather was warm. Thirty-five professors, a pair of astronauts, aspiring young filmmakers, musicians, budding entrepreneurs, and world-changers, all with a sense of adventure and incurable wanderlust were all living together in an academic community, exploring our earth.

Each week held the promise of a new port city to experience–to taste, see, hear and to make memories in. We would spend anywhere from 2 to 5 days in each port, free to go do as we pleased.

All around the Atlantic we sailed, through the North Sea to St. Petersburg, Russia, crossing through Germany via the Kiev Canal to visit Hamburg, and then France and Belgium. Then we sailed through the English Channel to Ireland and south to Portugal and Spain. At the beginning of October we left Europe and sailed to Casablanca, then to Ghana and across the equator to Cape Town, South Africa. After Cape Town came the long two-week Atlantic Crossing to South America, arriving in Buenos Aires, Argentina, and then going north to Rio de Janeiro and later Salvador in Brazil. We finished out the voyage in the Caribbean Sea visiting Havana, Cuba with a surprise day in Freeport, Bahamas after class finals.

It was a whirlwind. It was wonderful.

Visiting all of these places, meeting people from all over the world, one thing has stuck out about all of the other lessons I’ve learned, on or off the ship. While oddly paradoxical, it rings  incredibly true. The Cuban medical student who’s favorite show is the “Big Bang Theory,” the talkative hairstylist from Fez who scribbled her Facebook name in my journal, the nomadic Bedouin herdsman chatting on his cell with his buddy a couple of dunes over: they and so many others have made it clear to me that all humans are more similar, but at the same time each more completely unique than anyone could ever fathom.