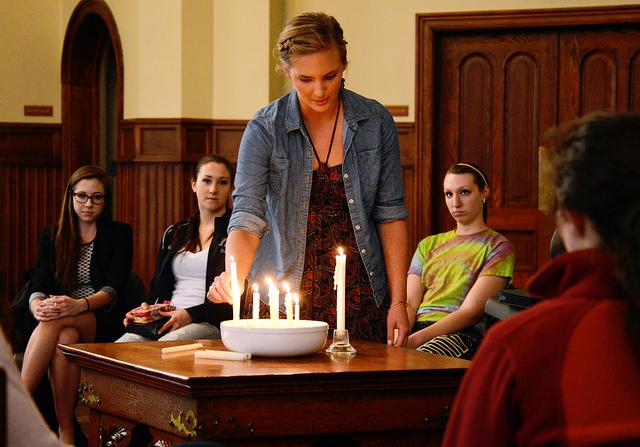 AMASA SMITH/THE CAMPUS Kelsey Sadlek, ’14, lights a candle as Morgan Mechlenburgh, ’15, Maddy Yemc, ’17, and Alexandrea Rice, ’17, look on during a prayer service in Ford Chapel on April 10, 2014. The service was held by the college for the victims of the Franklin Regional Senior High School stabbing earlier this week. Lead by College Chaplain Jane Ellen Nickell, participants prayed for victims and families affected.

Prayer service held for victims of high school stabbing
A stabbing spree in Murrysville, Penn. left 20 students and a security officer either stabbed or slashed on Wednesday, April 9. Sixteen year-old Alex Hribal is being arraigned as an adult and will be facing four counts of attempted homicide, 21 counts of aggravated assault and one count of possession of a weapon on schools grounds, according to a criminal complaint made public.
A prayer service was held in Allegheny’s Ford Chapel on Thursday evening for the community of Murrysville. Because of its close proximity to Allegheny and the large number of students from the area, Allegheny’s Counseling Center and Office of Spiritual and Religious Life are encouraging students affected by the tragedy to seek support. Both offices are located in Reis Hall.