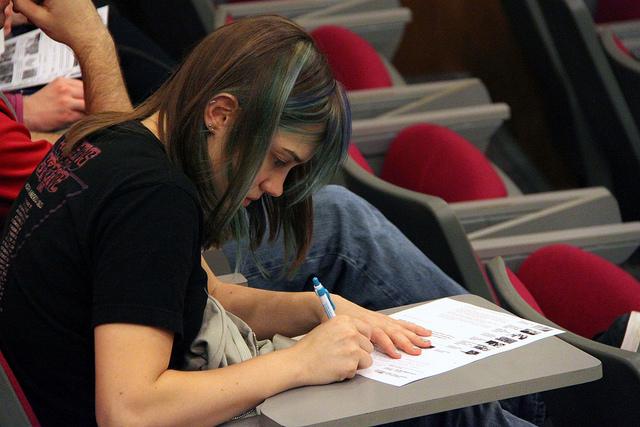 MEGHAN HAYMAN/THE CAMPUS Laura Pellegrini, ‘17, wrote notes during the discussion on a hand out about the Delhi case on April 9, 2014.

Since April 2001, Sexual Assault Awareness week has been nationally recognize in order to raise awareness and organize prevention activities. Here at Allegheny, awareness events have been organized by the recently founded Allegheny Coalition Against Rape Culture (ACARC).

Leading ACARC is president Lauren Dominique, ’15, who started the organization with other students who participated Professor Kazi Joshua’s introductory class in values, ethics and social action. Some of the students recognized a need to take steps to make a change on Allegheny’s campus because of their passionate beliefs.

ACARC’s goal is to raise awareness about rape culture and how it negatively affects the Allegheny community, as well as to provide a safe space for victims, survivors and supporters of the cause.

ACARC began events on Monday, April 7, with a discussion in Grounds for Change with Christina Smith, a worker at Women’s Services Inc. in Meadville. Smith gave information about what Women’s Services offers, mainly that of absolutely free and confidential support at all hours of the day, offering services for the homeless and victims of domestic or sexual violence.

Women’s Services is currently working on a text line to provide even more anonymous support for those who need it from them. They hope to have it completed before the end of the year.

On Tuesday, April 8, Allegheny welcomed speaker Katie Koestner, the first date rape survivor to speak out nationally against sexual violence. Koestner, who began her story with charm, humor and a soft voice, quickly had the Shafer Auditorium silent as she explained the attack she survived in 1990. As Smith informed the group on Monday, 80 percent of victims know their attackers. This was also the case for Koestner, who told the crowd that she trained herself not to cry when telling the story to avoid victim blaming. Despite lacking the support of either her parents and having little support from the administration of William and Mary College, the school she was attending, Koestner explained that she managed to find the determination to continue:

“Sometimes I think our motivation is amplified when we feel small,” she said.

Since her assault, Koestner has been on numerous national television shows, including Oprah, to speak out against sexual violence. Her testimony on Capitol Hill was instrumental in the passage of federal student safety legislation as well.

Although the details of the case were not discussed in depth, handouts were available detailing the verdict of the six men charged in the case. Gang rape is not an infrequent occurrence in India, according to Wood. Poor women are known to be raped.

Martin agreed, saying that cases like this happen everywhere, everyday and addressed why she thinks that is: “We have a socially constructed system that ranks some people above others,” she said.

Despite this thought, Martin said, “I think [ACARC] is the first step to changing things.”

Wood said she believes that here at Allegheny there is much more that can be done to promote activism, and several students joined in to agree.

ACARC scheduled a “Coffee and Consent” discussion in GFC for April 10, announced that students should wear teal on April 11 in support and collaborated with the Queers and Allies organization for a discussion about heteronormativity and hook-up culture at Allegheny on April 12.

Dominique said that although some students believe their group is too radical, she has also received extensive support and thanks for the action that ACARC is taking. She said that ACARC will be unable to completely drive sexual violence from Allegheny’s campus but that they have the future in mind:

“ACARC will strive to aid the effort and be a driving force behind the awareness movement. And although we–the current students of ACARC–will not see the complete abolishment of rape culture on this campus, we are here to start the movement.”