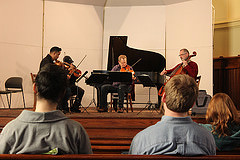 Warmly greeted and welcomed by the familiar and fresh faces, The Alexander String Quartet, continuing its 22-year relationship with Allegheny, returned to the campus and performed with Music Professor Alec Chien in Ford Chapel on March 27, 2014.

The Alexander String Quartet consists of Paul Yarbrough on viola, Sandy Wilson on cello, Zakarias Grafilo on first violin and Frederick Lifsitz on second violin. With similar desires to play a quartet, the founding members came together and formed in 1981. Yarbrough, originally from Boston, along with Wilson from Blyth, England are the remaining founding members of the group. Then, Frederick Lifsitz joined the group in 1987 as second violinist.

“String quartet to me is always the perfect ensemble. Each of you always have your own voice being heard, in that since you are a soloist, you are also part of the ensemble,” said Lifsitz.

San Francisco native, Grafilo joined the group officially as first violinist in 2007. He knew about the group when he was still a student at San Francisco, and received some coaching from them too. Because of their experiences together, the group invited Grafilo to join as an official member.

Ford Chapel was filled with people, anticipating their performance.

“For more than 10 years, I have never missed their performances,” said Roberta Levine, wife of Theater Professor Dan Crozier.

The program for the night included Ludwig Van Beethoven’s first and last string quartet, which are String Quartet in B-flat major (Op.18,No.6) and String Quartet in F major (Op.135).  Along with Chien, they also performed Antonín Dvořák’s Quintet for Piano & Strings in A major (Op.81). The group wanted to present a wide range of songs to the audiences.

“This program is very attractive, and the music is very enjoyable,” said Wilson.

“Amazing. They are so together, they just speak to each other,” said Dick Diess, Meadville resident.

“Fantastic as usual. They are wonderful, it is lucky to have them so people can enjoy their performance especially here in Meadville,” said Professor Kelli Shellito, piano instructor.

The group also enjoyed the performance, especially with Chien.

“Playing with Alec Chien is a real joy. He is such a fun pianist,”said Yarbrough.

The performance of Antonín Dvořák’s Quintet for Piano & Strings in A major (Op.81) with Chien gave a perfect ending for the night. The audiences entranced by the performance, gave a standing ovation to the group.

“I always enjoy performing with them and we have played many times, not just at Allegheny,” said Chien. “They are wonderful musicians without the diva attitude. Many in the community have gotten to love them and annually, they have great expectations. I play with them every other year, at their invitation.”