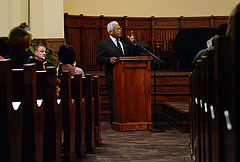 Allegheny College hosted a two-day conference on the legacies of the Civil Rights Movement, bringing a multitude of scholars and activists together to collaborate with students. Friday, March 28 and Saturday, March 29, students, staff and local community members were encouraged to participate and attend sessions and speakers from morning to night.

Lawson is known for teaching Dr. Martin Luther King Jr. and other civil rights’ activists the importance of nonviolence during the Civil Rights Movement. In his speach at Ford Chapel, Lawson introduced the idea of how present-day activists need to reclaim nonviolence in their philosophies and actions.

“One of the things he said was that there is more activism now then really ever before,” said Rooney. “It’s not necessarily as effective as activism in the past was, and he thinks that’s because people have kind of put nonviolence philosophy on the side.”

According to Rooney, the address was well attended, with a variety of students, professors and community members filling up the main floor and balcony seats.

As Lawson’s focus was on nonviolence in today’s culture, he took the stance that there are more activists today than in the past, but these activists are not as effective because they do not execute nonviolent principles.

“An event that stuck out to me was the non-violence workshop led by Rev. James Lawson for it was really well attended and it was informative,” said Liesel Anderson, ’15. “He gave a list of books to read to understand nonviolent direct action and dispelled some common myths around direct action. It was really neat and a privilege to get to learn from a leader in this field and a person that played a large role in the Civil Rights Movement.”

Lawson’s keynote was just one of many events scheduled for the weekend conference. Students and other participants had a wide variety of scheduled events from early in the morning until late at night.

“There was so much that I enjoyed and wanted to go to but I could only go to so many sessions,” said Seitz.

The schedule had a number of sessions at the same time, so participants had to choose one session out of many.

“It was engaging, took a lot of energy, a good kind of energy. I feel very driven after it and kind of approach things with this new passion and also with a critical lenses,” said Seitz.

Even though participants had to pick and choose their sessions, most felt the conference was a productive outlet for discussion.

“I thought the conference was really great, I was pretty involved so I felt like I have a good sense of how it went,” said Rooney. “It was neat not only because students from other colleges were here, but what was especially cool was having such high-level, renowned scholars here with us and interacting with us.”

Students emphasized how great of an opportunity it was to collaborate with a wide variety of scholars and activists and hope more opportunities to continue these discussions will occur next year.