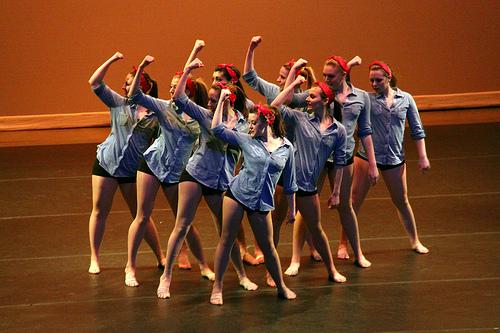 JaDE was joined on stage by several other organizations, including three performances by Orchesis, one by each of the Meadville community dance studios Allegro and Studio 83, one from the Dance Minor’s concert, one by the class Ballroom 3, one from the community group The Arc and one by Women’s Rugby.

Impressively, JaDE was able to pull this concert together a month earlier than usual. As opposed to holding the concert at the beginning of April, they performed on March 2.

Student Caitlyn McNamee, ’14, a co-concert chair and former president of JaDE, remarked, “It was crazy leading up to the concert, but it’s so rewarding and it’s such a good cause.”

As well as supporting a worthy cause, the concert was highly entertaining and impressive.

One student, Levi Lundell, ’17, said, “It was really powerful, really moving. It really brought me out of myself.”

Powerful is an accurate word to describe the performances, as emotions were susceptible to change quickly between each of the twelve dances.

In the first dance, JaDE performers imitated the famous World War II icon Rosie the Riveter in costume and background color, immediately setting the scene for the following dancers’ determined support for the cause.

Following their performance was group of dancers from Meadville’s The Arc, an organization that orchestrates events for people with intellectual and developmental disabilities. The dancers’ enthusiasm and fervor elicited applause, whistles and cheers throughout the entire performance.

The third dance was performed for the second time to audiences, being one of the three from the Orchesis performance earlier in the year. Though less dancers returned for the second performance to Macklemore’s ‘Wings,’ it was still an equally powerful display of the rising dangers of consumerism in America.

Guests dancers from Meadville’s Allegro dance company performed fourth, impressing the audience with the skill and synchronization they had in spite of their young age.

A dance from JaDE’s Cookies and Milk concert led into the intermission, where students collected donations for the Crawford County Special Olympics.

The second half of the concert was even more impressive than the first, beginning with a dance to Kelly Clarkson’s ‘Catch My Breath.’ It was another from the Orchesis performance and was choreographed by JaDE’s treasurer Casey Freed, ‘15, who wrote in the program, “I chose to express this idea of being yourself throughout my piece which tells the story of a girl who is learning how to not be the person that everyone wants her to be, but instead finds herself as an individual.”

After the inspirational freedom of Freed’s dance came a dance to Gin Wigmore’s ‘Man Like That,’ which well-loved Brooks employee Yvonne Longstreth, the Master of Ceremonies for the night, described as “upbeat and sassy.” Audience members were not disappointed while watching Studio 83’s dancers confidently take the stage and surprise those watching with a side aerial halfway through.

The last Orchesis repeat was a tap dance choreographed by Victoria Pless, ‘14. The dance was largely steady and maintained a slower rhythm that only picked up in intensity a few times near the end, always lapsing back into their initial slower rhythm.

Ballroom 3 put on an impressive performance with a flirtatious cha-cha. The men walked on stage first, dressed in all black, and the women followed soon after, clad in bright red, flappers style dresses. The dancers elicited cheers when they stunned the audience with several impressive lifts and energetic swing moves.

One of the pieces from the Dance Minor’s Concert was performed as well. Their dance was emotional and full of stretching and reaching. The dancers did different moves for most of Rufus Wainright’s ‘Hallelujah,’ symbolizing the isolation each of them portrayed, until the end when they all came together and grabbed hands.

Women’s Rugby became involved with the encouragement of player Erin Sumerfield, ‘14, who is the daughter of sponsor Betsy Sumerfield. Reminiscent of the sports teams’ talent show, Women’s Rugby danced in their jerseys to a mash-up of Ke$sha and Pitbull’s ‘Timber,’ Panic! At the Disco’s ‘Vegas’ and Fatboy Slim’s ‘Weapon of Choice,’ and did push-ups during the performance, exhibiting energy and enthusiasm for an entertaining show.

The last dance was definitely one of the most moving performances. Performed to Passenger’s ‘Let Her Go,’ choreographer Audra Lemmon, ‘14, wrote in the program that the dance “focuses on the struggle we face to hold on to the people and things we love and cherish.” At the conclusion, each dancer stopped one-by-one until the last exited the stage. The one to leave, McNamee, is the only senior currently in the JaDE program, and the dance was symbolic of her upcoming departure.

Powerful is indeed a good word to describe the benefit concert. At the end, JaDE and its supporters had collected a total of $2655 for the Crawford County Olympics, making it a considerable success.