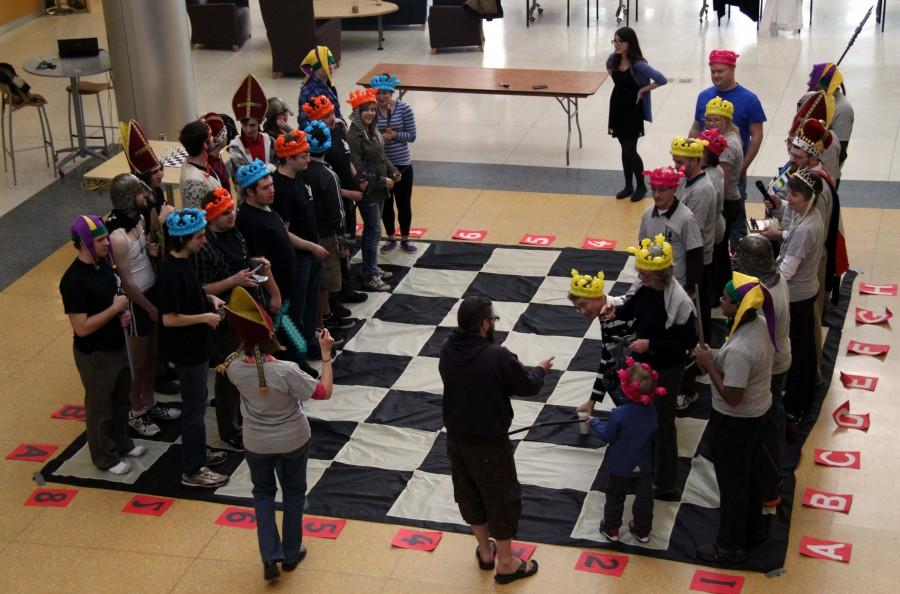 MEGHAN HAYMAN/THE CAMPUS Faculty and students are dressed and armed to begin the first human chess event of the semester on Feb. 22.

Chess club vice president and king piece for the student team, Vince Russell ‘15, was trapped by the newly appointed queen, English professor Matthew Ferrence and the rook, math professor Chris Lundberg. Plunging the plastic sword between arm and side, Russell fell to the floor, defeated. Physics professor and king piece, Jamie Lombardi, secured victory for the faculty after an hour and a half long match on Sat. Feb. 22 in the campus center lobby.

Faculty and students took their places on the chessboard tarp, each adorned with either plastic crowns of blue, red, pink and orange, jester, bishop or red bejeweled hats according to one’s piece. Each participant was given T-shirt for the event, gray for faculty and black for students, but was not required to wear them during the game. Students were dressed in an array of outfits, ranging from Russell’s Superman onesie to Luke Smith’s, ’16, short shorts and white tank top. Most professors took advantage of the new shirts and wore them into battle along with plastic swords, daggers and halberds.

“It’s my third or fourth [time],” Nickell said. “This is the closest I’ll ever get to be a real bishop. So I enjoy it for a brief time.”

Wilson, ‘72, is the equivalent of a bishop in her church. She was asked by Nickell to participate to welcome her back into the Allegheny community.

“I’ve never done it. I’ve never heard of it,” Wilson said. “This is purely social and experiential.”

Philosophy professor Eric Palmer garnered much laughter by taping “Just a pawn in this game of life” to his back. All costumes and headwear provided by the club had been collected from past chess matches. Chess club president Shelby Rhoades, ’15, purchased some of the garb last semester for the fall chess match before it had been canceled.

The sign up was first come first serve. The students were able to fill in a missing spot with a backup, but the faculty was still missing a pawn. With no other faculty around to volunteer, Ferrence’s four year old son, Jozeph, filled the available spot.

Ryan Trivus, ’17, a pawn, was the first to be captured by a faculty pawn, English professor Michael Crowly. The students retaliated by taking Jim Lombardi, another pawn, soon after. As the game progressed, more players were eliminated, and soon the queens, English professor Susan Slote and Ted Nelson ’16, were head to head. Slote, carrying a plastic dagger and already thinning out the opposing team, was stopped by Nelson when she threatened his king.

Ferrence relieved his son of duty as a pawn halfway through the game, having already been captured as a knight. This was his first time participating in human chess and originally chose to be a knight alongside his colleague, biology professor Bradley Hersh.

“Chess is a metaphor for…life and kumquats,” Ferrence said, in search for a distinguished quote. “Professor Brad Hersh and I wished to be some joint group so we are the knights that say Ni. The knavish knights. We go by a lot of terms.”

Things turned for the worse for Russell and the students, and he soon requested strategy advice. He offered Lombardi a draw, but it was not accepted.

“I made a pretty horrible blunder at the beginning and it’s caused us the game,” Russell said. “Unless we can pull something miraculous off.”

Russell and team members were using the projected board on a screen behind them to decide their next moves while Lombardi and Palmer were huddled around a handheld magnetic board. Drew Spaniel, ’14, was in charge for the second year to move the pieces on the screen according to game play. Jennifer Torrance, ’16, was one of many that helped Spaniel keep the board in order.

“I’ve had friends who wanted to do it before,” Torrance said. “It would be a lot of fun to do something like that. I’d like to be a knight I think.”

Spectators from the second floor watched as the game played on, students and faculty faked blows and fell to their knees and pieces on the screen began to disappear.

For the past several years Allegheny’s chess club has organized a human chess match at least once a semester. Rhoades plans to organize the event again before the end of spring to make up for the cancellation last fall.