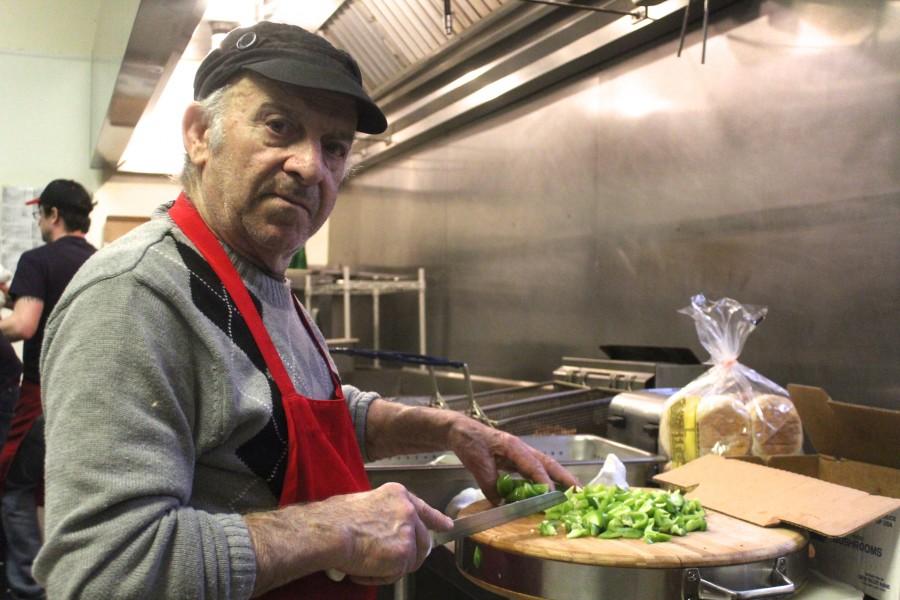 CAITIE McMEKIN/THE CAMPUS Poppa, father of the owner of Mannino’s Italian Garden, chops peppers in preperation for a night of cooking Italian dinners for diners at the restaurant on Feb. 20.

Driving down the highway, Chovy’s doesn’t look like much more than a roadside restaurant, catering to the trans-Meadville traffic. When I visited for the first time, I was new to Meadville. In fact, it was over move-in weekend, and Chovy’s was the last dinner I was going to be having with my parents before they left. Needless to say, between the nerves and the homesickness, the meal would have had to be extra-delicious to make a good impression.

It was and it did.

Upon entering Chovy’s, the interior struck me as being in complete contrast with the exterior. Outside, the flashing marquee and loud script across the building seemed almost tacky. Italian casual, indeed, as the sign advertised. But, as I’ve been told more times than I can count, you can’t judge a book by its cover. Upon entering, I realized how true this old cliché was in reference to Chovy’s. There was a quiet elegance. Conversation was muted and tables set enough apart that other parties weren’t a distraction.

Unlike the outside, the decorations were all understated and homey. I absolutely loved the atmosphere. It was nice, but not stuffy.

The food, too, was a pleasant surprise. Fettuccini alfredo is one of my favorite dishes, and I am quite picky about how it is prepared. Chovys’ Pasta Michelangelo, with broccoli and chicken, is one of the best renderings of this dish that I have tasted. I highly recommend it.

The great thing about this restaurant, however, is that it is a wonderful place to have a nice dinner, but it is also a fantastic place to have a casual lunch. Just recently, I took a friend of mine there when she visited Meadville for the first time.

We went a little after the typical lunch rush, and were seated right away by a friendly hostess. We were served quickly with delicious, warm bread and our meals followed soon after. The Pasta Michelangelo was, again, delicious. We both ordered it, and, despite eating until we weren’t sure we could move, we both left with substantial left-overs.

Before leaving, however, we decided to live on the edge and try dessert as well. This, too, was a wonderful decision. The peanut-butter pie with chocolate drizzled on the plate was absolutely delectable. Having been full only moments earlier, I managed to eat most of the peanut butter pie (at least until the chocolate was gone) without a single regret. My friend, too, thought the peanut butter pie was a must-eat.

Overall, my experiences at Chovy’s have been quite positive. Don’t be discouraged by the exterior! The inside is nice and calm, the service is quick and the food is absolutely delicious. Every time my parents visit or a friend decides to visit for the weekend, Chovy’s is the first restaurant I think of when they ask where we should eat.

I would definitely give Chovy’s 4.5 out of 5 stars. With a great atmosphere, wonderful service, delicious food and enormous portions, Chovy’s is definitely one of Meadville’s treasures. Whether it be for a nice dinner with family or a casual lunch with friends, it’s a great escape if you just want to get off campus for a bit and are looking for a delicious, Italian meal.

Mannino’s Italian Garden is a small, family-owned restaurant located on Chestnut Street. It offers decent Italian food for the prices they charge.

Mannino’s has red walls, real flowers on their tables, and ’50s style chairs. It has a comfortable and appealing atmosphere, and seems very spatious despite the fact that there is a decent amount of seating and it is a small restaurant. It is decorated with numerous photos of the owner’s family as well as pictures of big attractions in Italy, such as the Coliseum and the Leaning Tower of Pisa.

Similar attractions are featured on the menus, which are full of a large selection of foods filling up three pages with small print. Most of them are Italian cuisines like pastas, pizzas, calzones and stromboli. There are some different options like burgers and subs.

As soon as my friend and I entered the restaurant, workers on the other side of the room called a greeting to us and invited us to seat ourselves. We were quickly introduced to our server and received our drinks in no time.

Although I have only eaten at Mannino’s once, I can say that our server was very friendly and had our food out soon after we ordered. He also checked in with us several times to clear plates and make sure we were well taken care of.

One of their particularly good options are the garlic knots, of which you can get six for just two dollars or twelve for three.

Mannino’s offers different specials every night, which I ordered when I visited. I received a salad, a big portion of spaghetti with meat sauce, and garlic bread for nine dollars. My food was filling and fairly good, but I wasn’t particularly impressed with the sauce on the spaghetti because it was somewhat bland.

The stromboli and calzones offered at Mannino’s are served in huge portions. My friend ordered a small portion of stromboli but it took up about half of a fair sized plate. He did really enjoy the stromboli and almost finished the portion despite its size. He was able to leave with leftovers that he looked forward to eating later.

In addition to their entrees, Manninos serves delicious desserts. I ordered the ultimate chocolate cake and enjoyed every bite of the rich dessert. I do think that it was a bit overpriced for the size, since I paid four dollars for it.

Overall, I would rate Mannino’s with a 4 out of 5 stars, deducting some for the bland sauce and overpriced cake.