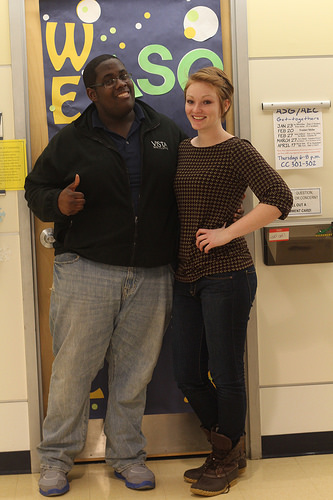 MEGHAN HAYMAN/THE CAMPUS Larry Hailsham and Autumn Vogel will represent the face of ASG as next year’s president and vice president.

Larry Hailsham, ’15, and Autumn Vogel, ’15, won the Allegheny Student Government [ASG] presidential and vice presidential positions for the 2014-2015 school year by 63 percent of the votes.

ASG held student elections for president and vice president from Wednesday, Feb. 12 through Thursday, Feb. 13. Students voted on WedAdvisor for either Hailsham and Vogel or the write-in candidates William Schroer, ’15, and Skyler Ray, ’15.

Eight members of ASG’s Rules Committee vote on approving or denying the president or vice president. Only six out of eight members approved the students’ votes.

“There was a lot of miscommunication on the duties of the Rules Committee in this process and it just took some clarification as to what the purpose of this committee was during a process such as this, this being the president and vice president approval,” said Brogan McGowan, ’16, chief of staff. “There needs to be a majority approval and there was only two people missing. I needed six out of eight signatures for approval and I received six out of eight signatures.”

Of all the Allegheny student body, only 407 students voted, approximating 19 percent, an alarmingly small majority of student voices.

“It’s important for the students to vote for the student government president and vice president because they are the overseeing governmental force that guides the senate throughout the next year, and the senate has the ability to decide the fate of any club on campus whether it be their financial status, constitutional status or anything like that,” said McGowan. “If the senate doesn’t have guidance then there is potential for a whole lot of disorganization.”

One of Hailsham and Vogel’s objectives in their platform include increasing student involvement in ASG and college-wide decisions.

“That’s really what we want, an influx of interest,” said Vogel.

“I think that the unclear circumstances of this situation [president and vice president approval] should thoroughly encourage the student body to become more engaged, more aware and more outraged by the people making decisions based on the organizations they’re involved in, and they should come to voice these opinions at every single ASG meeting, whether it be class meetings, committee meetings or general meetings,” said McGowan.

Of their four main action steps, Hailsham is most excited about his and Vogel’s ideas on community.

“I’m excited about our idea of community, and really taking Allegheny and trying to embrace that we all are here together,” said Hailsham. “I think at Allegheny it is really easy to get caught up in your different social groups on campus. The “We Are Allegheny” poster that sits at the top of Shafer is very significant. I think that’s the most exciting thing, trying to change the culture around Allegheny and around Allegheny student government, particularly.”

When Hailsham and Vogel officially announced their campaign, they were the only ticket on the ballot.

“I know for a lot of people the fact that Larry and I were the only names on the ticket was kind of a point of contention, whether or not they supported Larry and I, people were very concerned there was really only one option,” said Vogel.

This outcry for another candidate caused Schroer and Ray to finalize their write-in campaign, after initially missing the candidate deadline.

“Instead of one ticket running and there not really being an opposition to it, then we can propose some ideas and different scenarios and maybe even interest the student body to vote or get more involved in general,” said Ray. “I feel like for there to be an election there has to be an opposition to whoever is running. There can’t just be one ticket.”

“But then last week, before the election, we [Schroer and Ray] learned that no one else was running and they [Hailsham and Vogel] were running completely unopposed and I was a little uncomfortable with that because elections are how ideas are spread,” said Schroer.

Grounds for Change hosted a presidential and vice presidential question and answers session on Monday, Feb. 10, where both Hailsham and Vogel and Schroer and Ray could answer questions posed by constituents.

“It was good because Skyler and I came in with our ideas, Larry and Autumn came in with their ideas and during the course of the discussion, we picked up and saw the value in their ideas but they also picked up and saw the value in our ideas,” said Schroer. “We could definitely see the exchange of ideas and that’s the point of having an election, that it presents more than one view point so you can really grow.”

“I think it’s important to have competition. Whether or not the competition is viable is up for the people to decide. But I think it’s great that they ran,” said Hailsham.

Hailsham has been involved in student government since his freshman year and Vogel joined in the fall of 2013.