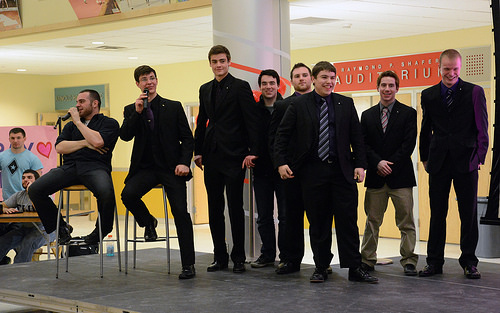 The brothers of Phi Gamma Delta, known as FIJI, held a Valentine’s Day auction to benefit the United Service Organization on Wednesday, Feb 12.

“We just wanted to do something to raise some money for philanthropy around Valentine’s Day,” said Chad Brinkman ‘15. The idea for the Valentine’s Day auction started last year, so this year’s event was only the second annual.

At the auction, individuals or groups of students were presented with a description on the screen behind them, then bidding began starting at five dollars. Many of the auctioned participants were bought by their friends or fellow Greek life members.

All of the money raised went to the United Service Organization. The USO is an organization that supports troops overseas. According to the USO website, the organization is committed to sharing a touch of home with troops wherever they serve. USO provides everything from free phone cards to care packages of need items, entertainment tours or just a simple hug.

“Last year was the first time we held this event and we ended up raising over $1000 for the USO,” Brinkman said. Anthony Lonzo ‘16 said the Valentine’s Day auction was a great success last year, and the brothers were hoping for the same results this year if not better.

And that goal was reached. At this year’s auction, the brothers raised over $1,500 for the USO. Not only did an increase in donations for the USO happen, but awareness for the philanthropy also rose from the event.

Twenty-seven groups or individuals participated in being auctioned off. These participants sold for a range between ten dollars and $220. Many of the other Greek organizations on campus participated to their fellow Greek members. These groups went for the top amounts.

David Lynn ‘17, a new member of FIJI, said they were not expecting to go for the most money, but just wanted to fundraise more.

The brothers of FIJI, especially the new members, were not expecting to be the group who went for the highest, but wanted the event to go well and raise as much as they could for the USO.

“I liked seeing who was auctioned off, what activities they chose to share, and how much they went for,” Lynn said. Each participant included a description of themselves, the activities they enjoy, what they would do for whoever bought them, and how long they would be willing to be with the person who bought them.

The Valentine’s Day auction was a definite success for the fraternity, and for the USO who will receive the money.

Other philanthropy events hosted by FIJI include blood drives and the Jefferson Duo 5K. 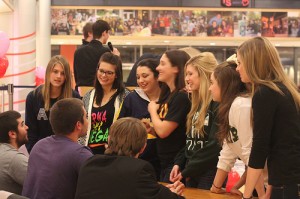 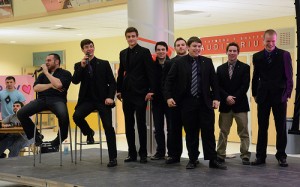