With temperatures dropping below zero in Meadville, Allegheny College remained in session much to the student body’s chagrin. Tuesday, Jan. 28, saw the coldest temperatures with a high of four degrees and a low of negative 13.

Sue Stuebner Gaylor, the executive vice president of Allegheny College, along with Dean of Students Joe DiChristina, Physical Plant, President James Mullen, and the Chief Academic Officer Provost and Dean of the College Linda DeMeritt, all collaborate on the decision to close classes. Though not necessarily obvious, a lot goes into making the final decision to cancel all academic activity due to inclement weather.

“[School would close] really if there was a significant threat to the well-being of the students, faculty and staff,” Gaylor said.  “My understanding is when they closed in the 70s there was weather like this but five days in a row.The trick for us is that 90 percent of our students live on campus. You still need to eat, you might want to go to the library, go to the Wise Center, and because we’re a rigorous place academically, it ends up really creating havoc on the academic calendar.”

“The hard thing is that other schools have different populations,” Sue Stuebner Gaylor said. “They might have more commuter students, and one of the trickiest things for us is that we are so highly residential and it’s not as clean as tidy as ‘we make the call,’ we do leave it up to the discretion of our faculty and staff. If they have big concerns on a snowy or a cold day, we ask them to make the individual decision.”

Despite the cold temperatures, DiChristina’s recent school wide email asked that students use  “good judgment” in dealing with the extreme temperatures and weather the Allegheny Community will experience.

If classes had been canceled, Gaylor did say that a skeleton crew of support staff would have been available to run the dining halls, physical plant, and a variety of other key personnel to keep the college running.

According to college historian Jonathan Helmreich, last time Allegheny College canceled classes due to weather was during his tenure as the college’s academic dean in the late 1970s. The closure, though, was not necessarily because of the cold. During a large blizzard, the Pennsylvania governor ordered all government institutions to close due to a natural gas shortage at the time and even though Allegheny is a private institution, they decided to heed his warning.

“If I would have fallen they would have found me frozen and stiff as a board,” Helmreich said describing his trek through the blizzard on the way to his home that day.

Before this date, the last time school had closed was shortly after World War II when all of the roads were closed. Students were unable to return from Thanksgiving break so they kept the school closed for a couple of days.

Other major universities have received public scrutiny for not cancelling classes due to the cold weather. University of Illinois at Urbana-Champaign’s Chancellor Phyllis Wise opted to keep classes in session only to become the victim of irate tweets that compared her to Hitler, Kim Jong Un and used the fact that she is an Asian-American to justify the unpopular decision. Though temperatures in Champaign did not quite reach the low of negative 13 like Meadville did, the lows during the week of Jan. 22 remained below zero for four out of the five days of the school week.

Haley Marbelstone,’16 felt that the temperatures were too dangerous for students to be outside.

“I think that classes should have been cancelled. You could get frostbite walking to class. Other colleges cancelled classes and my little sister didn’t have school, so why should we,” Marblestone said.

When temperatures dip below zero, prolonged exposure to the cold can cause frostbite and even hypothermia. According to the National Weather Service, it would take just under 30 minutes for exposed skin to get frostbite at a temperature of negative 10 degrees with a calm wind of five miles per hour.

Student opinions were mixed, as Winona Vaitekunas,’16 felt that the sub-zero weather was easily dealt with layering.

“I don’t think classes should have been cancelled because it actually wasn’t that bad,” Vaitekunas said. “I was out all day. As long as you dressed appropriately, there was really no reason to cancel.” 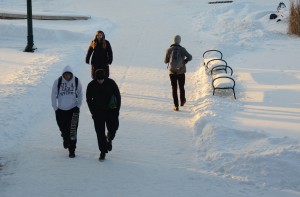 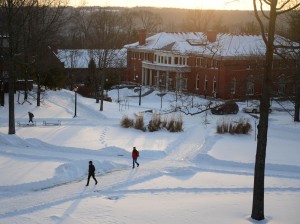 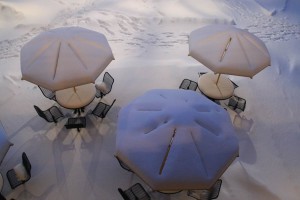