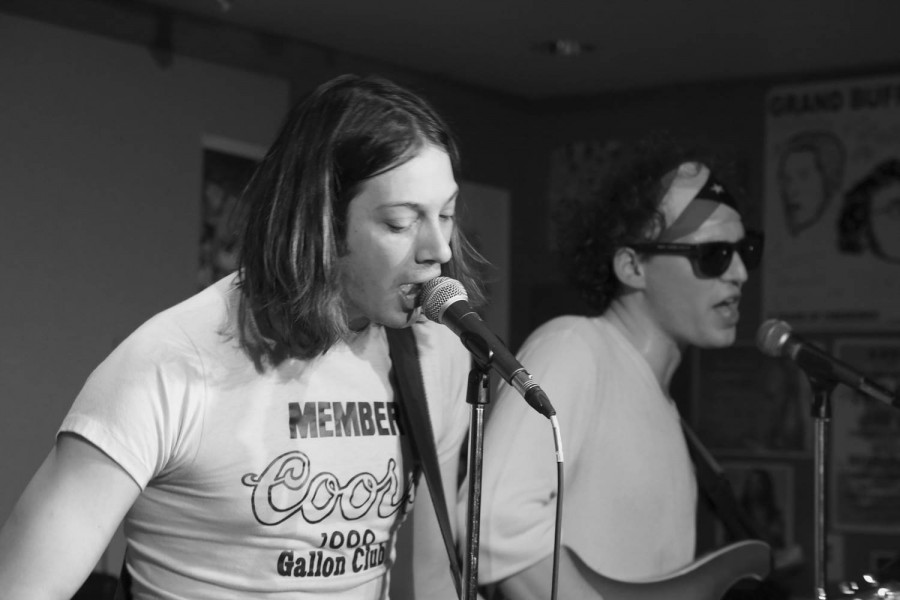 Lead singer of The Demos, Jason Milton sings an original song in Grounds for Change on Jan. 25, 2014. The band, originating from Rochesters, was making their second appearance in Meadvile, after having performed in GFC in the winter of 2012. CAITIE McMEKIN/THE CAMPUS

Music and spectators filled Allegheny’s Grounds for Change as it hosted The Demos, a band hailing from Rochester, N.Y., on Friday, Jan. 24.

The Hannigans, an indie-alternative band from Erie, were the opening act for the event.

During their short set, The Hannigans’s bass and lead guitar were prominent performers, drowning out the lead singer’s voice. The lyrics were almost unperceivable, with the singer’s voice only occasionally surfacing through the drums and guitars, and when it did, it was not great. It sounded like the singer was straining his voice somewhat, which created for a lackluster sound. The inability to hear the singing did not stop the music-goers as they crowded around the stage to hear. Out of their entire set, The Hannigans’s last song, which was slower, sadder and emotional, was the best.

Matt Lippman, ‘17, is a regular at GFC musical events.

“They held my attention and were catchy and fun,” said Lippman of The Hannigans’s performance.

Lippman came mainly for The Demos, whom he said he met at a previous concert.

Lippman described The Demos as similar to The Strokes.

“They are fun-loving and catchy.”

Chelsea Rogozinski, ‘17, had never been to a concert hosted by GFC before, and expressed excitement in seeing the band play.

“I’m really optimistic. I think they are going to be great,” said Rogozinski before the concert began.

Bradley Pollock, ‘17, was equally excited to see The Demos.

The Demos categorize themselves as ‘powerpop’, a mixture of British and American pop and rock music. Their music is similar to The Strokes and The Kinks. They looked like an eclectic bunch, and the member who stood out the most was a guitarist who wore eyeliner and an American flag bandana across his forehead.

Despite their appearance, The Demos sounded quite good. They jumped straight into their set without an introduction. The vocals, unlike The Hannigans, were clear and strong. ‘The Demos’ used lead and bass guitar, drums and an electric piano. The electric piano was what gave ‘The Demos’ their distinct sound, as it allowed them to insert electronic, synthesizer sounds as well as string instruments.

Their songs, overall, were upbeat, and had a feel-good way about them that made you want to dance in your seat. That feel-good emotion was infectious, and there wasn’t a single body in GFC who wasn’t swaying or moving to the beat of the music. The band as a whole was in tune with each other in a way that only hour-long practices would result in. Not only was the band in sync, but they seemed quite personable as they talked to the crowd, asking them how they liked the music.

One song they performed, they had only played live once before their performance at GFC.

“Tell me to throw it away if it sucks,” said the lead singer, Jason Milton.

The song was slower and more laidback than their other pieces, but it still captured the audience’s attention with the underlying harmony line.

The concert was an overall success. The Hannigans were a worthy opening act, despite audio issues, and The Demos exceeded all expectations.