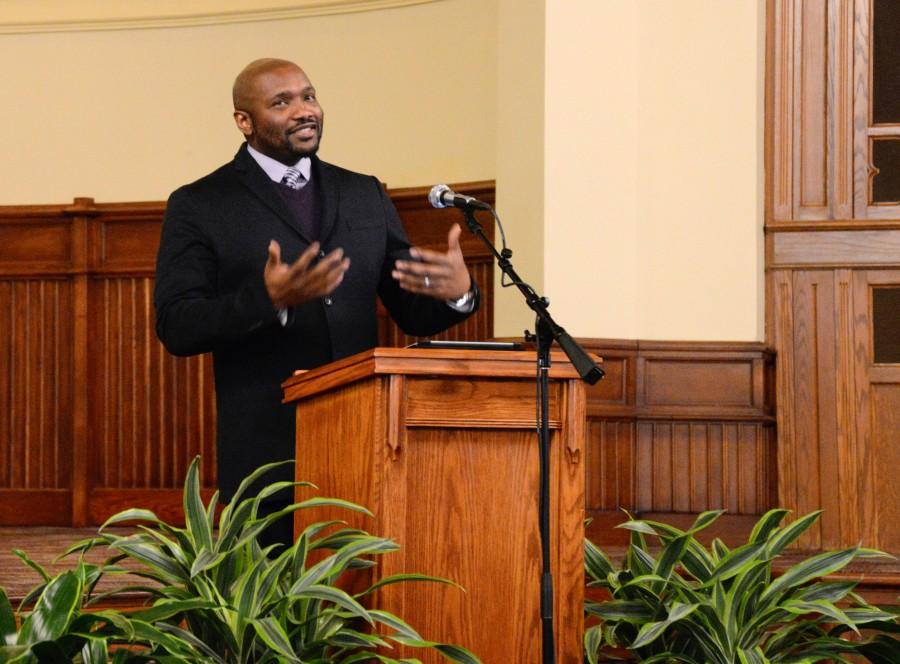 “When we closely examine work of King and his life, we are confronted with ourselves as we are and what we hope to be,” said Dr. Paul M. Buckley during his Martin Luther King Jr. keynote address “Civil Rights and it’s Challenge to Higher Education” in Ford Chapel Monday, Jan. 21, 2014. The speech is one of many that will be occurring during Allegheny’s Bicentennial Celebration

Buckley is the assistant dean of undergraduate students at Dartmouth College and a fellow at Dartmouth’s Gender Research Institute.  He received his undergraduate and master’s degree from the University of Albany and received his Ph.D. in cultural and education from Syracuse University. He has recently contributed a chapter to the upcoming book, “Race, Trayvon Martin, and American Justice: Writing Wrong.”

Buckley was recruited as a speaker through Kazi Joshua, associate dean and director of the Center for Intercultural Advancement for Students Success. Joshua works with a smaller committee where they make sure the events for the bicentennial year are consistent with the theme as well as coordinate the group study activities. Through Professor Eatmon of the Environmental Science department, he recommended Buckley to Joshua.

Buckley approached the podium on Monday after being introduced by Professor Valerie Sweeney Prince of the English department. Buckley began talking about his travels to Allegheny, leaving his wife and a seven month-old child behind at home.

“It’s a journey from one small town to another small town, but it feels almost necessary and important,” said Buckley.

Buckley’s address wanted to challenge the audience to consider Martin Luther King’s work and to not only embrace it, but to take the baton forward, taking a step further into action. He focused on the topic of inequality within our education systems, which leads to equality throughout society.

“Inequality is magnified with higher education and universities,” said Buckley.

Buckley reminded the audience  that at smaller universities, we need to keep in mind the different perspectives. He recalled that some call private school ‘bastions of privilege’, with students from the bottom 25 percent representing five percent of the study body and tuition increasing 500 percent , four times the rate of inflation, since the 1980’s. Buckley further mentioned that studies have proven that low-income students are often underplayed.

“At smaller institutions, there may not be a large representative of diversity,” Buckley Said. “It’s still important that close communities and those campuses engage in issues of diversity, which are issues relevant to everyone. We must believe in these issues or we will be practicing pretense, pretending to care, pretending to listen.”

“We must ask ourselves, does Allegheny, together, have a purpose?” Joshua said. “I think, the college being around for 200 years, that is a really important question to ask.”

Buckley stressed the importance of each human using their love to stand up for injustice everywhere in the community and to find their true purpose.

“Individuals must have enough love to examine themselves honestly,” said Buckley.

Buckley closed his keynote address with a quote from Martin Luther King, Jr., “I am convinced love is the most durable power in the world. Love is an absolute necessity for the survival of our civilization. I hope, pray that we can survive and thrive together.”

Along with the Allegheny’s bicentennial theme, Civil Rights and Suffrage,  one-credit group study courses are offered which consist of students attending guest speakers as well as initiating conversation in smaller groups with professors after each event.

“Our bicentennial theme elaborated on a lot of information connected to those two core ideas,” Joshua said. “But it seems that education is not a monologue, but rather it is a dialogue. The group study idea allows for consistent deeper engagement over time.”

Buckley agrees with Allegheny’s addition of these courses as well.

“I think it’s a wonderful initiative. Education is a process. It’s not about a one- stop show. You know, so I think it’s great. Allegheny is doing great things. Education should face all of us taking the most important journey to find ourselves.”

Remembering what his grandmother told him about the past, Buckley wants his young daughter to grow up one day to question and realize the power everyone has toward changing the society around us.

“I want my daughter to be concerned about that, as soon as she is able to talk about these issues, that she is engaging,” Buckley said. “By the time she is in college, that she knows that she is coming to a place that will welcome her and that will challenge her to think about what her role could be in effect and change.”