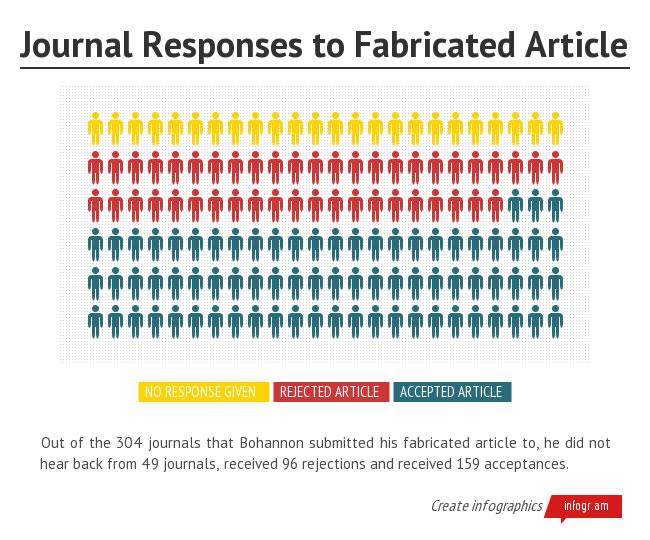 To Bohannon’s surprise, 159 out of 255 open-access journals that responded accepted his work including several reputable journals. Even the prestigious Kobe University in Japan agreed to publish his work. Forty-nine other journals did not respond to his submitted article.

Ironically, the Public Library of Science, which has been criticized for its peer review in the past, was the only journal that questioned the study’s ethical treatment of lichens and consequently rejected it within two weeks.

“Researchers collect more data than they actually need for a particular project in hopes to use the data in the future. Other researchers use [the collected] data to answer other questions within the field,” Venesky said.

“Some people do not want to give up the data that they collected. Under the current system, researchers are not obligated to provide authorship [to the original researchers] because there is no any industry standard at this point,” Venesky said.

There are an increasing number of predatory open-access journals that extract information from undisclosed sources, copy and paste original research, or deviate from academic research structure.

Jeffrey Beall, a librarian and scientist at the University of Colorado Denver, has developed a list of questionable, scholarly open-access journals. Beall noted that the number of predatory open-access journals increased over the last few years. On his list of Predatory Publishers, Beall warns that many open-access publishers are corrupt and only exist to make money from publishing fees.

Venesky further noted scientists and journals are pressured to publish findings because until it is published, its utility to the scientific community is minimal.

“How many papers a scientist publishes is a huge indicator of their success as a researcher. We [research scientists] not only have high pressures to publish for the community but also high pressure from academic and national funding agencies,” Venesky said.

Venesky also said scientists need to constantly submit research to received funding from agencies and universities. Additionally, universities usually evaluate science professors based on the quantity and quality of their publications. Scientists who publish frequently are more likely to move from assistant to associate to full-time professors.

Peer review is an integral part of research. Venesky noted that in the biological and environmental sciences, associate editors of academic journals contact leaders in the field and usually find two or three reviewers for the manuscript. These reviewers access the overall quality and novelty of the research.

However, Venesky said that peer reviewers are not compensated for money and time.

“I get solicited to perform a review here at Allegheny College and that takes 20 to 40 hours on average to read, think about it, and review it. That’s 20 to 40 hours that I am away from interacting and teaching students at Allegheny. Our consultant work is provided for free and its done on our [scientists’] own time,” Venesky said.

In turn, publishing companies make large profits on the research and peer review efforts provided at minimal cost. Venesky noted that the peer review process leads qualified researchers, typically experts in their fields, to decline opportunities to review manuscripts because they are not willing to sacrifice their time to revise manuscript.

Venesky also contended that peer review is limited by conflict of interest within the scientific community.

“Given that the rejection rate in many high-tier journals is 90 percent, a scientist can submit research to a  journal several times without [it] being accepted, which means eight different times, two people [16 people in total] have spent 20 to 40 hours reviewing without passing on their critiques along the line to the next peer reviewer,” Venesky said.

However, the most qualified scientists on any particular topic often have associations with each other ([for instance] they have published a manuscript together or have received funding on a collaborative grant) and then are often excluded from performing the review,” Venesky said.

Venesky added that when the original manuscript is ultimately rejected, the researcher can subtly revise the manuscript and re-submit this version to another journal-which does not have access to previous reviews.

“There is a movement to make those reviews more accessible to other editors of journals, so that the editor can read the peer review and assess that reviews are adequate. In this new model, the researcher would have the option to submit the reviews of their work to the next reviewer,” Venesky said. This model would allow for collaboration among peer reviewers, who could expand on the reviewer’s original comments, which saves scientists time and money.

The combination of peer review and unethical/altered research has contributed to the growing number of predatory open-access journals. Altering the traditional peer review system and carefully critiquing research can boost the credibility of scientific articles.

For the time being, however, Bohannon’s prank study indicates that a significant amount of scientific journals have not changed the way they review and publish scientific research. 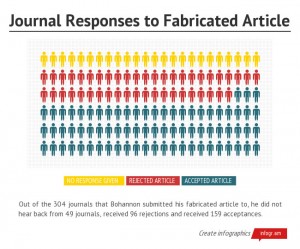