‘We are ALLegheny’: New addition to orientation 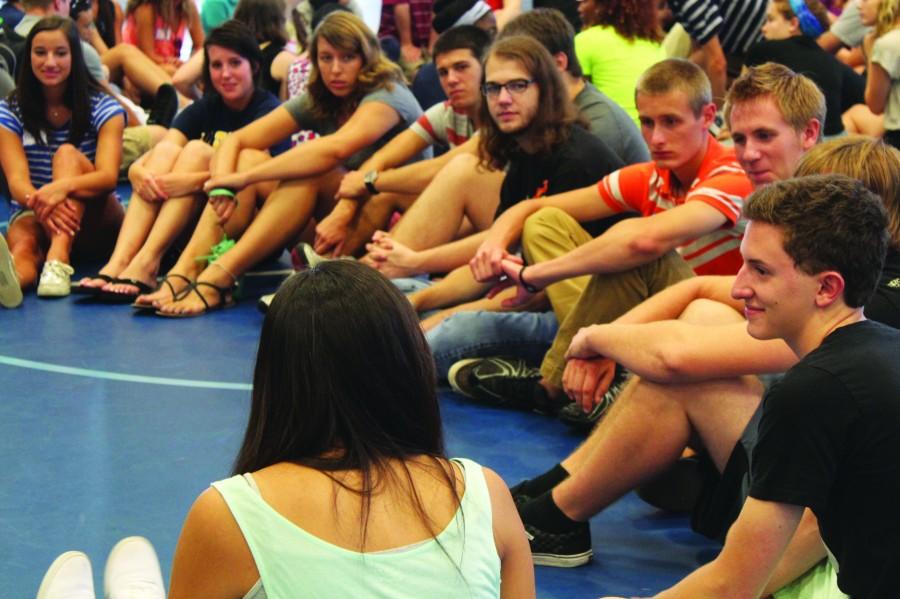 Caitie McMekin/The Campus A group of freshman listen intently to one of their peer’s life story. Each freshman had a chance to tell their story at the ALLegheny workshop held on the blue courts in the Wise Center on Aug. 25.

This year, Allegheny added a new program to the first-year orientation program: We are ALLegheny, a four-hour interactive session geared towards introducing new students to the concepts of diversity and community. valerie guerrero, assistant director for the Center for Intercultural Advancement and Student Success, sat down with The Campus to talk about the goals of the new program.

The Campus: When did you first start thinking of adding this to the orientation?

guerrero: It’s been a conversation for quite some time since the conversations that the administration had last year with folks who were part of the coalition of students making a lot of great suggestions. Through those conversations we actually were able to create a time in the orientation schedule for the program. So that block of time was cut out early but then we had a lot of work to do as far as solidifying presenters who would actually be leading the sessions.

C: What were kind of the overarching goals of the new discussion?

g: The overarching goal was really to give students the opportunity to have some thought provoking group work related to concepts of diversity and what that might mean to them. To have individual reflection time to think about their own roles on campus and their personal identities and then some time in smaller groups to share with each other what their experiences might have been or what they might want to be learning in the next four or so years.

C: Was the program installed more to address problems that we’ve had on campus concerning issues of diversity or just to reinforce our statement of community?

g: In addition to giving folks the opportunity to think about these issues in different individual, small group, large group conversations, we wanted folks to make the connection that you will be living by the statement of community for the next four years.

So this session served as an introduction to Allegheny community expectations. So, we really saw it more as proactively setting this class up to start interacting in conversations about privilege and oppression and liberation over their four years in various contexts, whether that be through programs in the residence halls or classes that they take or clubs that they’re a part of or attending programs through our office or safe zone training. [T]his was really just the tip of the iceberg of “we want you to engage in this conversation constantly” so it was really more about setting that tone for this class and making sure they’re connected to various ways to keep the conversation going.

C: Is this an entirely new program at Allegheny or have there been programs like it in the past?

g: You know, to my knowledge I don’t think that we’ve ever done anything that’s this large-scale and interactive. I mean, I know for many years folks have always had a session in the orientation schedule where they would usually meet and sit in Shafer as a large group and hear from a presenter but we wanted to ship them off so folks were talking to each other more and having a lot more interactive opportunities for dialogue. So, this was kind of our trying to get in that direction.

C: What was the structure of the meeting?

g: The whole four hours were lead by our presenters from the Harris Jones Group and every new student was grouped by their FS class, so we started out as a large group and they kind of introduced the tone and why we were there and then we broke into our core groups which were your FS group plus one more FS group. So most groups weren’t more than 30, there were a couple of FS groups that had 16. So within those groups of 30 everybody had a staff or faculty facilitator and two student facilitators so the goal was that if people had very strong feelings or something really emotional came up that our staff and our faculty are a lot more experienced in dealing with those issues. […] But we really wanted new students to see that our continuing students are active parts of this conversation, that it wasn’t just going to be you hearing from your faculty member, it was everybody sharing that these things are important and we need to understand not only where we come from but how are we going to break down barriers that aren’t caused by us individually. So even if you are individually being very nice and supportive to someone that doesn’t mean that they aren’t still going to face inequality, so how can we work together as a group of Allegheny new students to combat that inequality that everyones going to experience at some point.

C: How do you think the new program was received?

g: I think there is a very wide mix. Theres a large number of students who participated who really felt that they enjoyed seeing their community and the new class that they’re in all in one space. They enjoyed feeling that they had community support, that some folks were brave enough to share some very personal stories and get support from their classmates and so there was definitely a feeling of “we’re all in this together, we’re all going to support each other.” But I think we all sort of left with a “what now, how can we connect this to the rest of our stay here” feeling.

C: Will the program be continued in the future?

g: At this point I don’t think there’s necessarily a question of if we won’t do it again. Its more of how can we do it again and just make folks more comfortable or maybe have more in depth dialogue. Like I said, I think we really got to that surface space of, let’s share our experiences and have the opportunity to show care for our classmates, but we didn’t get to that space of really challenging our ideas or our preconceived notions of different identities or how that relates to the greater structure.

So in the future we want to sort of build in how can we get people to think about that critically. Even though we’re not going to say “hey it’s day one, let’s talk about oppression,” we do want folks to have the sense that this isn’t just about us as individuals. […] I think there are a lot of exciting ideas that we have based on what we did so far and where we want to go with it [but] I honestly think it’ll be a couple years before we figure out what works very well or what works best for our community. But I’m really excited that we tried it and hopefully this gives us some great things to build on throughout the year.