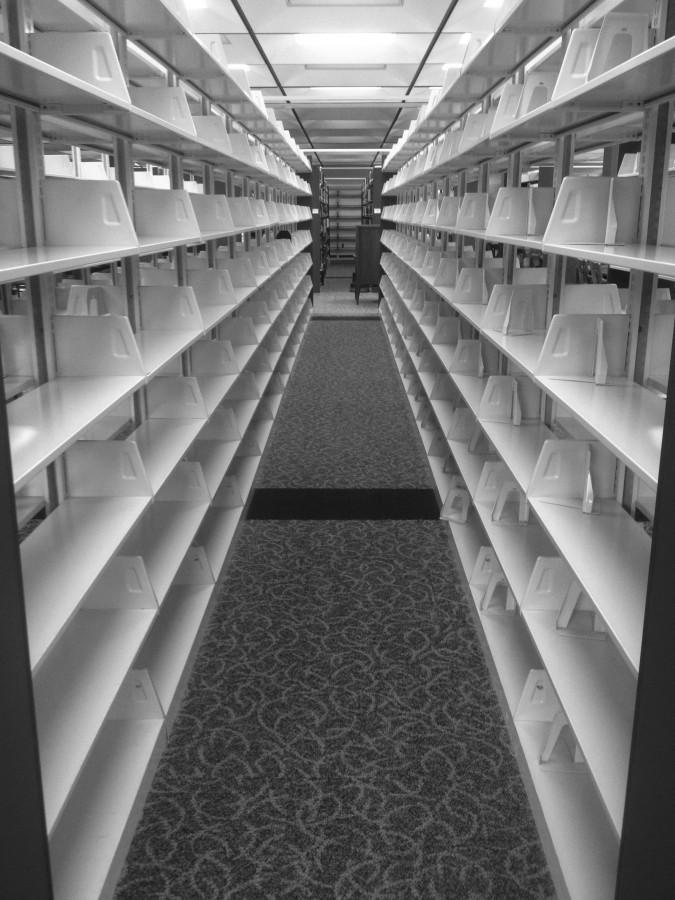 After discovering mold last year on the lower floor of Pelletier, staff members cleaned and condensed the library's collection making lots of extra room on the shelves.

Students returning to campus this year might be surprised by the new decorating scheme on the lower level of Pelletier Library – rows on rows of empty shelves.

According to Linda Bills, library director, the empty space is the result of an intense spring cleaning project spurred on by the mold problem library staffers battled for over a year.

The majority of documents discarded because of mold were, according to Bills, either out of date or government documents that are now available online. This purge made space in the compact shelving units located along the back wall of the bottom floor.

Into this freed up space moved the bound journal collection, which formerly resided in the shelves that now stand empty. According to Bills, about one quarter of the bound journals were also discarded because they can now be found on JSTOR or a new program the library installed Wednesday called HathiTrust, which archives journal literature.
“We don’t want people to freak out when they come down here and go ‘what happened to all the books?’” Bills said. “We didn’t throw away any books if we could avoid it, and if we did throw them away we found a way to replace them.”

Bills said that if any books thrown away due to mold had a circulation history, they were replaced with hard copies. Documents that did not circulate but can be found online, however, were not.

“ [F]rankly, nobody wants them,” Bills said. “We checked with everybody we possibly could to see if anybody wants them; in fact, we did give some of them away to other libraries who wanted them. But on the whole, people don’t keep bound journals anymore.”

Between the emptied shelves, additional tables and chairs were placed next to each available outlet, making more space for students to sit with their laptops, according to Bills.

But the decorating scheme in Pelletier might change again soon; Bills said that the college hopes to move all offices geared towards preparing students for life outside Allegheny, such as Career Education and International Programs and Services, into the library so they can be in close contact with each other and the Learning Commons.

For now, however, the shelves on the lower floor will remain empty. But that is not to say Pelletier’s collection isn’t growing. According to Bills, the library acquires about 3,000 new books per year in both hard copy and electronic forms.