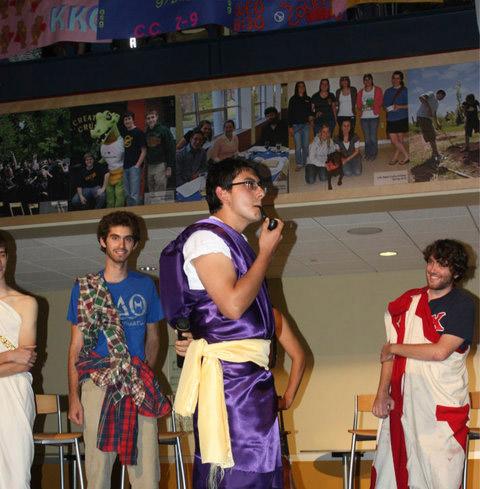 They tell me I’m too weak to compete.

Honestly, they’re probably right. I stand 6 feet 3 inches, but a small gust of wind could topple me over. I am 155 pounds with arms smaller than my 14-year-old brother’s.

But last week at the Greek Olympics, standing in the crowd of people surrounding the tug of war competition, a proud and passionate blaze sparked inside me. I wanted to be pulling with the rest of my fraternity, not watching the match from the sidelines.

Fine, I decided. I’ll be the cheerleader.

And, sure enough, fifteen minutes later we stood victorious — once underdogs, now champions. There was a burst of high fives, fist bumps and yelling from every brother, amplitude and excitement unmatched by any other organization at the games.

All ten fraternities and sororities on campus stand under the banner of Greek Life, but this doesn’t mean that being Greek doesn’t encourage competition.

In fact, competition is a remedy for apathy.

The thrill of winning or the possibility of losing is a great way to unify an organization. It doesn’t take much, maybe just a friendly tug of war contest, to incite fiery passion within brothers or sisters.

For a week, interfraternal friendships would be set aside. Greek Week is a competition. The prospect of winning makes every organization salivate.

It all starts with the dodgeball competition on Sunday.

My chapter manages a thrilling upset over another fraternity to take second place in the competition. We’re proud of ourselves for pulling off silver yet feel that gold was reachable.

Although it’s not the top prize, the whiff of victory tantalizes us. When the Greek Olympics come on Tuesday, we’re ready. Unlike last year, widespread enthusiasm fuels our competitive spirits.

Maybe it is the prospect of repeating a pathetic performance or the revelation that coming together as a whole is not too much to ask. Whatever it is, a good amount of brothers come out to the games Tuesday and watch my chapter dole out a significant thrashing to our competition.

I think both the Interfraternity Council and Panhellenic Council plan Greek Week early in the year on purpose. Competition spurns unity and strengthens the pushing of the boulder.

When you win, your chapter brims with confidence and swagger. When you lose, you feel the weight of discontent on your shoulders, and (hopefully) strive to succeed the following year.

It’s the thrill of winning or the possibility of losing which rallies members of a chapter.

So yeah, maybe I’m too weak for the tug of war contest, but I pull my weight in the Greek God competition, scoring enough points for third place. Afterwards, as I had done after our thrilling win at the Greek Olympics, I receive hearty handshakes and congratulations from my brothers.

It’s clear that during Greek Week teamwork is pervasive throughout our chapter, pushing us to be better than anyone else.

Sam Moritz is the creator of the blog The Crackers.