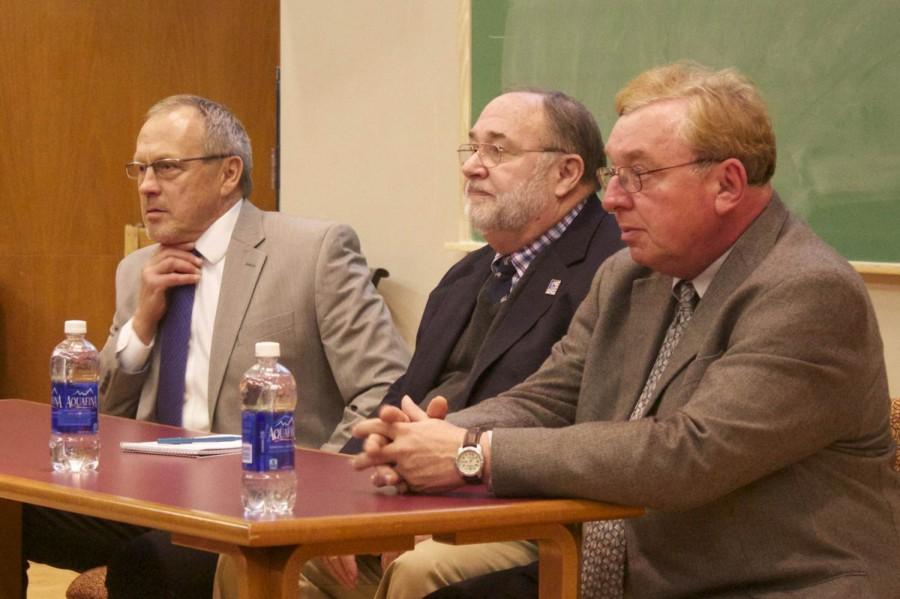 From left to right, Burt Waite, Bob Garland and Lou D’Amico look upon the audience in Quigley Auditorium as they are introduced by Ray Jozwiak, ‘15, on Wednesday, Feb. 27, 2013. Photo by Caitie McMekin

The Allegheny College Republicans hosted a “No Green Slime” question and answer session and a panel featuring the Pennsylvania Independent Oil and Gas Association, or PIOGA. Keynote speakers were Lou D’Amico, president of PIOGA, Burt Waite, senior geologist at Moody & Associates in Meadville and Bob Garland of Universal Well Services.

On Wednesday evening, these industry experts discussed the strict requirements companies like Shell and Exxon place on drilling companies like Universal Well Services.

D’Amico suggested that the state of Pennsylvania, too, requires dozens of strict permits that must be adhered to for drilling. The timeframe to receive these permits can be longer than six months.

Discussions about hydrofracking at Allegheny’s Bousson Environmental Research Reserve are developing. A large portion of the student population has expressed its concern, with over 700 individuals having signed a petition against hydrofracking at Bousson. However, not all students oppose the idea.

College Republican Raymond Jozwiak, ’15, explained that he organized the event to demonstrate that many students do support fracking.

“I think there is too much attention paid by some students on this campus on the meaningless minutia, and not enough attention on the facts behind shale, oil and gas exploration,” Jozwiak said.

He added that shale, oil and gas industries are often misrepresented as being anti-environmentalist. Proponents of fracking have reacted by launching a campaign called NoGreenSlime.com, the inspiration for the title of the Republicans’ event.

According to the website, ‘green slime’ is “the propaganda being thrown at you and your neighbors every day by ‘environmental activists’ to condemn and vilify the revolution in energy development that is taking place in the United States.”

This revolution in energy development is the hydraulic fracturing industry.

“‘No Green Slime’ is not an attack on environmentalism,” Jozwiak clarified. “It is an attack on the misrepresentation of the shale, oil and gas industry.”

“[College Republicans] want to make a commitment to a civil, fact-based discussion on shale, oil and gas exploration, instead of playing Mickey Mouse games,” Jozwiak said.

The speakers explained the process of fracturing shale to allow natural gas to rise to the surface. They provided facts and figures about the amount of sand, water and hydraulic fracturing fluid required for fracturing shale.

D’Amico emphasized the economic benefits of natural gas drilling, citing projections from the American Petroleum Institute which showed that the industry could add as many 211,909 jobs to the state by the year 2020. According to these projections, the industry could generate as much as $1.87 billion by that time.

He also conveyed that natural gas is much cleaner than oil, with lower levels of carbon dioxide and sulfur dioxide.

The event was met with mixed reactions from the audience. Some students touted the economic benefits of natural gas exploration, while others voiced their concerns.

“I’m glad that there’s an event this evening, although the organization is questionable. It doesn’t disclose its donors, but still demands a fair discussion,” said Cramer.

He also accused PIOGA of being hypocritical for holding back information while simultaneously promoting ‘No Green Slime’’s argument, that environmentalists perpetuate lies about the dangers of fracking.

Various other students shared their concerns about the environmental impacts of drilling for natural gas.

One student questioned the culture of safety within the industry. Another was curious as to where contaminated water is stored after it has been used to frack. A debate erupted about sexual assault cases in small towns that had recently seen increases in blue-collar workers as a result of gas exploration.

The speakers were eager to answer these questions, even if their answers did not entirely satisfy questioners.

“The safety record of the natural gas industry is impeccable,” said Waite.