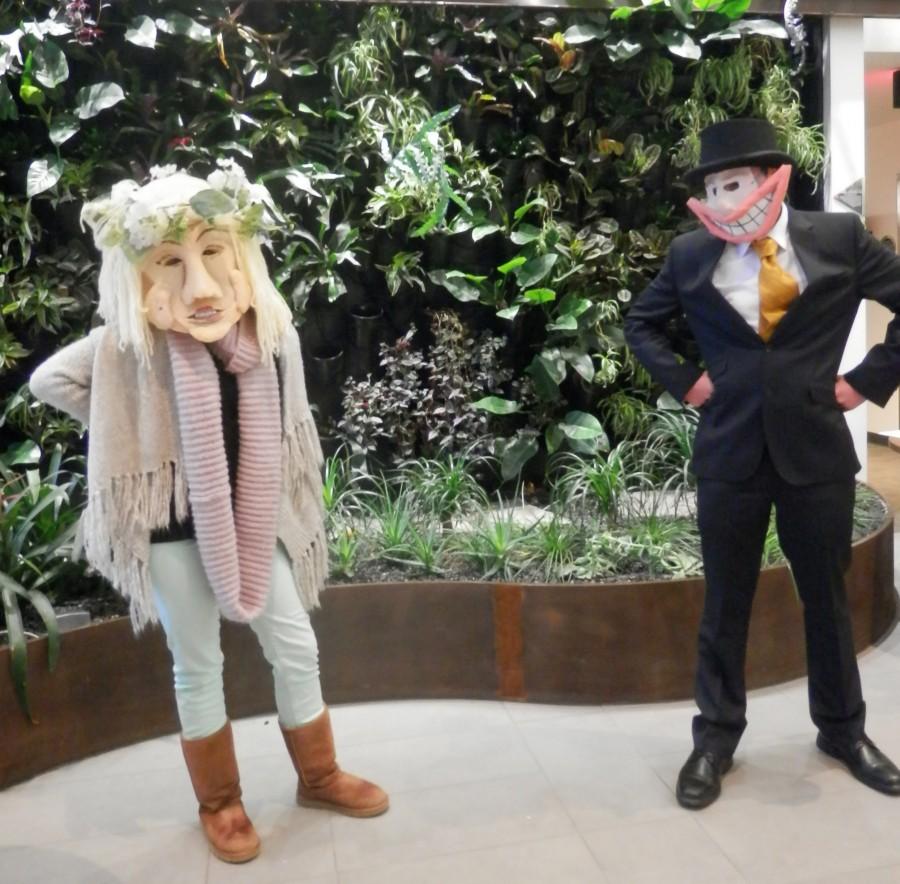 This weekend, environmental science major Shannon Wade, ’13, will discuss her senior project, a spectacle theatre performance meant to facilitate discussion about hydraulic fracturing, at the Dimensions of Political Ecology conference at the University of Kentucky at Lexington. Also attending the conference are Brian Anderson, ’13, Maxwell Lindquist, ’13, and environmental science professors Elizabeth Olson and Shaunna Barnhart.

Wade’s project is entitled “To Frack or Not to Frack: Performance as a Tool for Environmental Activism at Allegheny College.” She said her adviser, environmental science professor Eric Pallant, encouraged her to incorporate her passion for theatre, her minor, into her senior comprehensive project.

In Wade’s performance, two students wearing large paper mache headpieces represent opposing corporate and nature forces. These students pull on either arm of another student, usually played by Cale Davis, ’13, who dons an Allegheny T-shirt and represents the college.

As students enter holding their props – a big check made out to Allegheny College, a “no fossil fuels” sign – music plays according to the different themes. “Wade in the Water” plays when the clean water sign is carried out.
Wade said devising the project was a combined group effort. Members were inspired by Bread and Puppet, a political theater company in Vermont that tours the country with its life-size puppets. Performer Annie Krol, ’13, previously worked with a similar company, the Possibilitarian Puppet Theatre Company in Cleveland.

“Theatre can bring things to light in a really vibrant and visual way,” Wade said. “We wanted the nature figure and the corporate figure to be larger than life, so that the characters are […] being controlled by them, these big ideas.”

“It can be applicable to a wide range of social justice, environmental, political issues…it’s kind of bringing information to life,” Wade said of spectacle theatre. “That’s what intrigues me the most about it.”

In the first version, both levels of the campus center were utilized so that characters on the main level appeared to be controlled by puppeteers on the second floor.

“They were literally being puppeted around,” Wade said of her actors.

She said the performance was not intended to promote one stance on fracking over another.

“I tried to reach out to people who had a wide range of opinions, so that they could bring that with them to the creation of this [performance],” Wade said.

She said she consistently heard positive feedback about the performance’s neutral position on fracking.

“I think there’s a lot to be said for having meaningful conversation between people, even if you don’t agree…then you’re actively learning,” Wade said. “A lot of us may be leaning one way but we really feel both sides have valid points.”

Overall, the performance was designed to encourage discussion about a current, highly topical issue, both locally and nationwide.

Although she originally considered expressing her personal opinion on fracking through the performance, Wade decided to keep her stance neutral, leaving the decision entirely up to the audience.

“The more I considered…the more I realized that it’s a lot of contentious issues. It’s very much a balancing act,” Wade said.