Students sit in before faculty meeting to encourage discussions on fracking 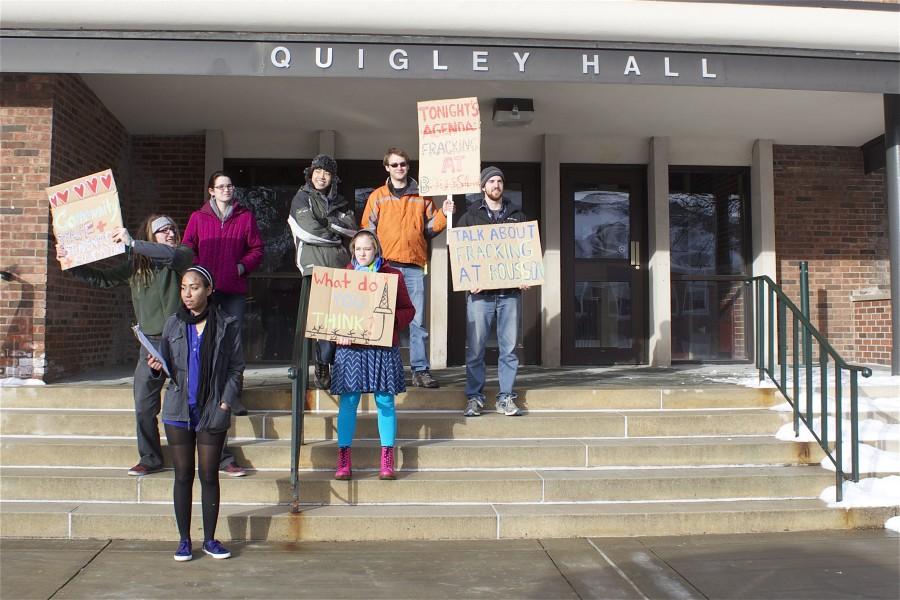 Some faculty members had previously suggested discussing the topic of hydrofracturing at Bousson at a faculty meeting on Thursday, Feb. 21, 2013, and the motion was overruled. Students responded by waiting outside Quigley Hall to encourage faculty arriving at the meeting to talk about hydrofracking.

Approximately 40 students gathered in Quigley Hall yesterday to meet professors arriving at a faculty meeting and to encourage discussion of hydraulic fracturing at Bousson Experimental Forest during the meeting. Students were positioned at each entrance to the building, holding signs reading, “Talk about fracking at Bousson,” and, “What do you think?”

“What do you think about fracking?” students asked faculty members as they approached Quigley. Most professors greeted students and accepted printed informational material about fracking’s hazardous effects before continuing into to the meeting.

Bousson Advisory Group representative Emilie Hickox, ’15, is also a member of Students for Environmental Action. She opposes the idea of fracking at Allegheny.

Hickox said an e-mail was circulated between professors regarding yesterday’s faculty meeting, and that some professors expressed an interest in discussing fracking. However, the desire was silenced by one authority figure whom Hickox would not name.

“[They] said, we’re not going to discuss this yet. We’ve talked about [fracking] long enough. It’s time that the faculty does start talking about it. We’re here to encourage them, and support them in talking about it,” Hickox said.

Hickox said that SEA knew of her personal opposition to fracking when it chose her to be the group’s representative on the Bousson Advisory Group.

“During the meetings it’s hard to try to be objective about it, [to] be unbiased,” Hickox said, referring to the two informational sessions the group has held so far.

Jessica Schombert, ’16, said she hopes the student sit-in will encourage faculty members to speak more openly about their opinions regarding fracking at Bousson.

“None of the professors have really taken a stance on anything and I think it’s important[…]they voice that they’re against it, or for it,” said Schombert. “I feel like [the faculty] would have more influence over the Trustees…[Trustees] probably think, oh, the students will be gone in a few years anyway. Faculty are here long-term.”

Schombert said she was undecided about fracking until she attended the first Bousson informational session, about seismic testing.

“Bousson is a research facility and there have been professors doing research there for decades. I don’t think it would be advisable to potentially mess that up,” Schombert said. “It could completely ruin the research they’ve been doing.”

Mike Vlah, ’13, a Biology major, said that the trustees should consider the long-term financial impacts of their decision.

“I think we have to address the [Trustee] board from a financial standpoint because that’s what they’re interested in,” Vlah said. “They need to consider that we are the trustees of the future, and if enough of this school is pissed off about what’s going on, that could have financial implications down the road.”

Allegheny Student Government Director of Sustainability & Environmental Affairs Brian Anderson, ’13, is also a representative on the Bousson Advisory Board. He said that the potential economic benefits of fracking do not outweigh the risks.

“This is not an economic boom for our college. This is only 1.25 percent of the entire endowment. It is a lot of money, but it’s not a make-or-break for the institution in terms of […] it lasting for another 100 years,” Anderson said. “This is a 50 to 100 year investment that Allegheny would be making on the [Bousson] property, which I think is ridiculous.“

“I understand the issues of economics that people support, and the idea that [natural gas] is a bridge fuel, but I also think that Allegheny is capable of a higher level of thinking than that,” Anderson said.

On the subject of bridge fuels, Hickox explained that the methane comprising 70 percent of the chemicals used in hydrofracking does not remain in the atmosphere as long as other greenhouse gases, such as carbon dioxide. However, methane is far more potent than carbon.

“We have committed…to try and be carbon-neutral by 2020. And I don’t understand how [fracking] plays into it,” Hickox said. “We should be looking for other resources…not adding to the market of natural gas and therefore making other renewable energy sources more expensive.”

She explained that by investing economically in the natural gas industry, Allegheny would be facilitating the market’s growth.

Schombert said it would be very difficult to instantly make the complete switch from natural gas to renewable energy sources.

“But we shouldn’t frack here. Not at a green college,” she said.

“Allegheny has labeled itself as a ‘green’ school for some time now,” said Chappel. “To allow fracking at Bousson would only be hypocritical.”

Additionally, students said not enough information is yet known about horizontal hydrofracking, which is a new practice, although hydraulic fracturing in itself is not new.

“Because there are so many unknowns and so much uncertainty about the long-term environmental impacts…we need to be cautious about this,” said Katherine Leary, ’13. “I feel like many of the issues aren’t being taken seriously yet.”

Vlah voiced his concern about the long-term integrity of natural gas wells.

“All of those wells, no matter how well they’re created, no matter how well they’re contained, are going to fail at some point in the future. […] but down the road, there’s no way they can maintain their integrity,” Vlah said. “Either by shifting of the ground, or deterioration of the materials that form [the wells]…the legacy effect of this is going to be huge one day.”

Angela Adusah, ’14, is also worried about the possibility of destabilizing the earth.

“You can mess up the integrity of a building…it’s no longer as stable because the ground’s not as stable anymore,” said Adusah. “I think such matters really need to be evaluated before we sell out [by] fracking.”

Hickox, who is from north of Youngstown, Ohio, said that her hometown has experienced many unnatural, small-scale earthquakes as a result of hydrofracking.

“That’s one thing they know for a fact. The pressure they use to explode underneath the ground does cause earthquakes,” Hickox said. “It’s totally unnatural for Youngstown to have these earthquakes. There’s no fault lines there.”

“I think it’s wonderful that we’re having this kind of discussion and debate on the campus. It is always encouraging to me when I see students care deeply [about] issues,” said Mullen. “I applaud them for the passion that they bring us…It reflects the best of our campus. I’m all for it.”

In approximately a week, over 500 people have signed SEA’s petition against hydrofracking. Hickox said that in general, SEA’s anti-fracking petition has generated about a 10 percent rejection rate.

“Out of every 100 people, there are about ten who say no,” she said. “If they said no, most of them said it was because they weren’t informed.“

Levio Corgnati, ’15, said many of his family members work for gas and oil companies and that he has seen evidence of fracking’s destructive effects.

“You can see the destruction…these massive roads appearing out of nowhere overnight,” he said. “The amount of destruction is amazing.”

Corgnati said he is surprised that Allegheny is considering hydrofracking on its property.

“It’s absurd that they would consider even just the seismic testing, because of Allegheny’s green image. I don’t understand it at all,” he said. “I really don’t think they’re going to go through with it but if they do I’d be genuinely surprised.”