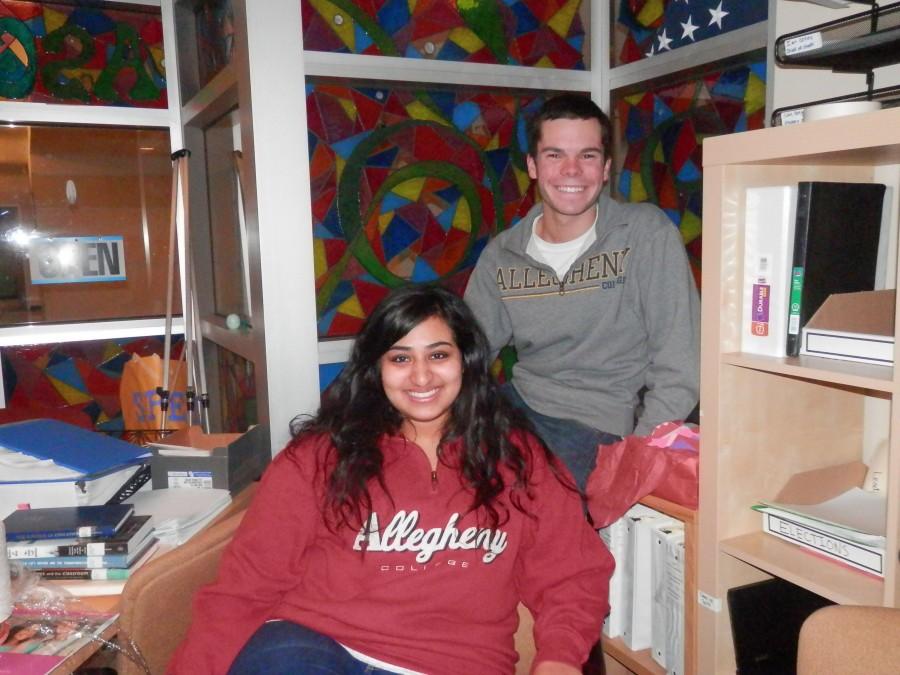 This week, The Campus sat down with Allegheny Student Government’s newly-elected President and Vice President to discuss the team’s primary goals for Allegheny in the upcoming year. One of their main objectives is to make communication between ASG and the student body more open and accessible. The team hopes to accomplish this by implementing direct representation, whereby each student will be assigned a particular Senator to contact with concerns and questions.

The Campus: What are your goals for the year?

Gena: “To implement direct representation and to reorganize [the] cabinet, utilizing [the] positions better, more clearly defining the rules. That’s been a big problem. It was brought up in the community forum for diversity talk. The cabinet doesn’t clearly know their rules, what constitutionally they can do and what not to do. [Also] restructuring finance […] We’re still researching ways we can reformat it completely, but we’re planning on putting the director of clubs and organizations on the finance committee […] as a direct representation of the clubs.”

Kevin: “The two of us can’t do everything that needs to be done […] One of our main goals is to pick people we can delegate things to effectively. Then together, as a cabinet, we will form goals for the next year once [the cabinet] is formed in a couple weeks. One of my goals is to show the campus and the community how we can do tangible things for them […] Show them that we have a purpose on campus, and that we’re there for [the student community].”

The Campus: Why are you focusing on direct representation?

Kevin: “Students feel very disconnected from the student government. There’s no line of communication […] unless you know someone on ASG. With direct representation, each senator has a number of constituents, so that way you know that [senator] for sure. You have a line of communication right to them. That makes it easier to voice complaints and talk about things you want to see […] You have a person you can go directly to, and it’s not awkward.”

Gena: “Direct representation also holds us accountable to the students. Transparency’s our big thing. Right now, during regular meetings, we have a section for constituent comments. And we’ve never had anyone come into meetings and talk during that, other than [Gator Activities Programming], to make announcements. We now have a forum for people to come in and bring in questions and have us explain what’s going on in ASG a little bit better. It also helps us form our own plans of action.

Gena: “We want to have each cabinet member have their own action plan, a strategic plan of goals for the semester and yearly goals, and how they’re going to utilize their committee to accomplish those goals [….] We want to go step-by-step and make sure we have the right people. I think the cabinet is a big, essential part of how ASG runs efficiently.”

Kevin: “It’s all about delegation. The last thing on the agenda at regular ASG meetings is constituent comments. So if there’s someone in the back who has something to say, a complaint or something, then that’s your time. Anyone on the entire campus can come and speak, because you’re all constituents, essentially. [Direct representation] just makes it more efficient and more open for them. So if you can’t come to the meeting, or don’t feel like sitting through an hour-long meeting just to voice that little complaint, you can send an email to your senator representative and then during constituent comments, that will be read.”

Gena: “Each senator has 50 constituents, and they also have a Google form [where] there are various questions that help us to feel out student opinion. Do you have anything you would like your senator to speak on your behalf about at the ASG meeting? [If so,] those comments will get uploaded to a master list, and then I or whoever takes it up during future years, looks at it and says, ‘There’s a pattern here. What can we do to voice these complaints and make a plan to see what we can fix about it?’”
[The comments can be made anonymously]

The Campus: Ideally, how do you envision Allegheny a year from now?

Gena: “I want more people to vote. Right now, only a fourth of the campus votes. I want to connect ASG with students more, have it be a student body government.”

Kevin: “If we raise the morale of the senators, that will transfer down. Most people only hear about ASG from people who are on ASG, who say, ‘Oh yeah, three meetings a week, it’s the longest thing ever, don’t do it, it’s stupid, we don’t do anything.’ We want to change that. We have purposeful meetings, we get things done and then we’re done. If anyone has any comments […] they can be heard in an efficient and organized manner. I guess in a year I’d like to go up to someone. I’d like them to know me, and I’d like to know them. And I’d like to ask them what they think ASG does, and have them repeat back to me what I want ASG to do. So not only are we looking to accomplish the goals that we want for ASG, but we want to make sure everyone knows what we’re trying to do.”

Gena: “What Kevin and I are doing differently this year is stressing the time commitment to the cabinet and to future senators. It’s going to be a little more [of a] time commitment than it was in previous years. We’re already planning a lot of things, like Senate orientation along with the normal cabinet orientation. Senate will come a day or two before school starts and have an orientation. We want mandatory Safe Zone training for everyone in ASG. So we’re putting in more requirements…it shows who’s really dedicated and who wants to make a difference on campus. Those are the people we need on Senate. I’m not saying that no one on Senate does that right now. But I guess right now, morale is so low, we’re sitting in meetings wanting them to be over. In the future we want people to be excited and ready, like, I can’t wait for this ASG meeting, I can’t wait to talk about this and get this done.”

The Campus: What is your role in planning the new diversity cabinet position?

Gena: “We’d want to have the committee be comprised of non-senate members…five members from various groups on campus that can have their own action plan and utilize ASG in the way they see fit, kind of an ad-hoc committee.. but it’s still in the works. I think there will be a couple more open town hall meetings. Right now we’re kind of going with the flow and seeing what happens. At the end, when the [student body] decides what it wants, we’ll put in our input and try to implement it the best way we can. The cabinet is supposed to be neutral, we don’t vote at all. The only thing we really say is to ask questions and give reports, and head committee meetings. The senate is what votes on everything. If we would take people and make a committee out of the senators, we would have to take people off of other committees, so we’re going to make it more open and make a committee for the Director of Diversity [position], but it wouldn’t be senators.”

The Campus: What would you like to tell the student body that just elected you to office?

Gena: “We’re really excited. We’re already working on our cabinet application…we’re roaring to go. I want to encourage people to run for Senate elections. I’m excited to see who…we get to work with. I’m just smiling because I’m so excited.”