Back from the brink: uncovering the forgotten history of Sandy Lake 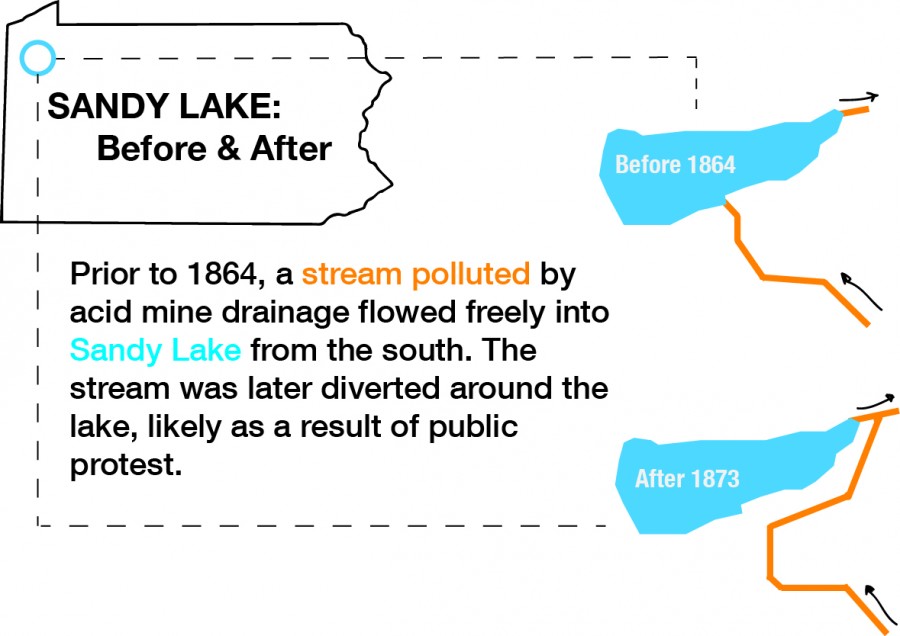 Late in the summer of 2002, professor of biology Milt Ostrofsky was patiently wading his way through the warm waters of Sandy Lake. Just twenty thousand years ago, he would have been walking on ice.

In the last Ice Age, an enormous glacial sheet that began in the Arctic reached out with icy arms to hug Pennsylvania from above, slanting down to cut off the boxy state’s top corners. Occasionally, the retreating glacier released a piece from its edges. Those fallen masses of ice carved out kettles in the earth where they landed, and the kettles became modest lakes. Sandy Lake is one such spot—a little over a mile long and half a mile wide in the northwestern part of the state.

Prior to that summer, Ostrofsky had discovered a thriving zebra mussel population in Sandy Lake’s waters. A single zebra mussel takes up no more space than your fingernail, but in large numbers the creatures can clog pipes, coat boat hulls and docks and cut the soles of beachgoers’ feet with their sharp shells. Their invasive presence has already driven out native mussel populations by monopolizing the lake’s hard surfaces—stones, other mussels, even the rigid stems of lily pads.

Ostrofsky wanted to publish his encounter with the mussels, and he only needed some background on their habitat.

“We wanted to put together a story of the lake,” said Ostrofsky.

But what began as a contextual footnote to zebra mussel population expansion quickly transformed into a fascinating narrative of the lake itself.

“No One Alive Knows About This”

One morning, a tattered copy of Pennsylvania’s 1897 fishing commission report arrived from New Hampshire (Pennsylvania, oddly enough, did not have a copy of its own). In it, Ostrofsky found something surprising: sometime in the mid-1800’s, acid mine runoff had devastated Sandy Lake so that every catfish, sunfish, perch and pickerel had been killed in the pollution’s wake.

To someone standing on the lake’s quiet wetland shoreline today, the report’s revelation is a startling one.

In fact, it’s one of the clearest lakes that Ostrofsky says he’s ever worked with.

The obscure report’s summary left Ostrofsky with what he called “a tantalizing little piece of information” and a few unanswered questions. For instance, the report briefly alluded to ongoing protests against the pollution and “early legislation…which would completely put a stop to the evil.”

How did the lake manage to recover from a complete extermination of life, Ostrofsky wondered, and how long did it take?

The only answers he could find lay in a pair of old county maps—one from 1864 and another from 1873. The earlier map shows a brook connecting the nearby Mercer Iron and Coal Company to Sandy’s Lake’s southern coastline. By 1873, that thin strip of water traces along the edges of the lake, avoiding it completely. But both documents lack explicit evidence detailing the lake’s quick route to pollution and recovery. 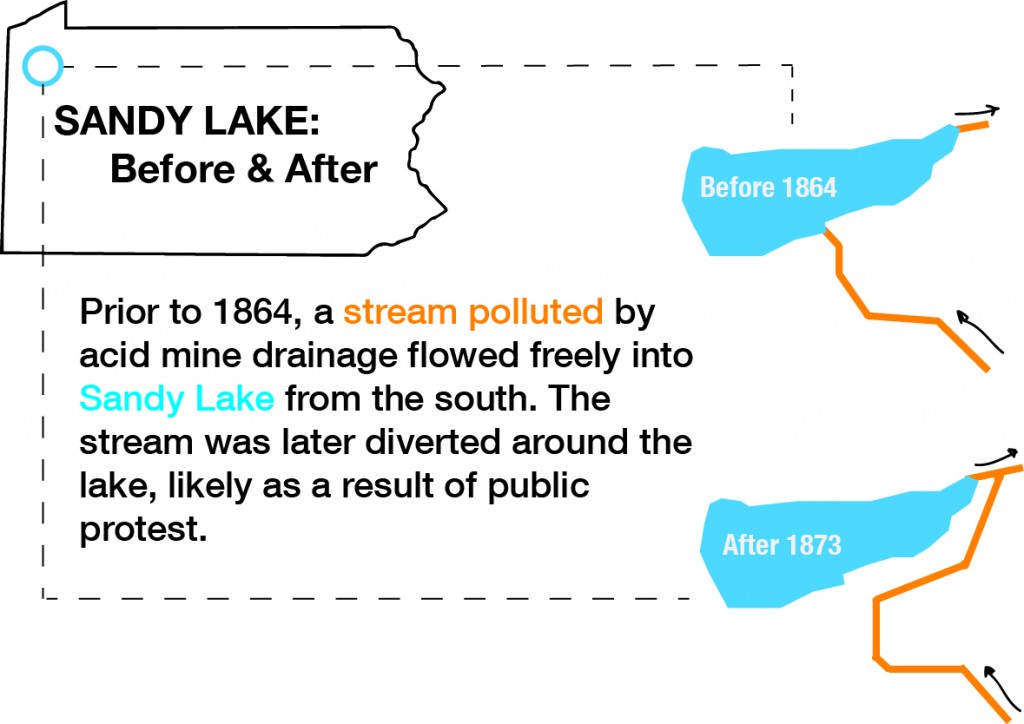 Ostrofsky likened his situation to old Columbo reruns on television, where the traditional detective story is inverted and the murderer’s identity is revealed in the opening scene. The greater mystery, then, stems not from lack of culprit but from lack of context.
“You see the crime; you know what the crime is,” Ostrofsky said. “But you have no idea how it happened and who was involved.”

Sometime in the last two hundred years, pollutant runoff brought all life within Sandy Lake to a temporary halt. The perpetrator was undoubtedly the long-defunct Mercer Iron and Coal Company with its careless waste disposal. By luck, Ostrofsky had become the first person in centuries to stumble upon evidence that any of it—the lake’s surprising brush with death, its apparently rapid resurrection—had happened. He wanted to be the first, too, to fill in the context.

Today, Ostrofsky recalls his discovery with excitement, especially his first thought after closing the report:

“No one alive knows about this,” he said.

In a flurry of old documents, the direction of his research had changed. Before he knew what was happening, Ostrofsky had set out to piece together the recent history of Sandy Lake.

The secrets to Sandy Lake’s mysterious past lay in the soft, cake-like layers of sediment deposited at its base. Minerals and the tiny, dead bodies of phytoplankton have piled up over time there and scientists like Ostrofsky can cut away at the accumulated layers to learn how a lake’s environment has changed over time. These scientists who take a closer look at lakes’ histories are formally called paleolimnologists, a title that translates literally to “those who study old lakes.”

For his research, Ostrofsky drives weighted, narrow tubes into the lake’s floor to collect two-foot long sediment cores, a process he likens to placing your thumb over the tip of a straw to suction up a milkshake. He then pushes the column up through the bottom of the tube and slices small sections off the top. Each section contains information about a brief period of the lake’s past.
Ostrofsky was hoping to find evidence, first, of the massive runoff contamination described in the 1897 fishing report.

When mine drainage first enters a body of water, it introduces iron and sulfur to the environment. The iron oxidizes to rust, which is why in some places you can find streams that flow a sickly, bright orange. The mine’s sulfur waste oxidizes to sulfuric acid, and that acid is the main culprit responsible for unbalancing delicate water chemistry and killing native fish populations.

When Ostrofsky examined his sediment cores from Sandy Lake, he found an abrupt spike in sulfur levels that corresponded to the mine’s development around 1865. Levels fell again in the parts of the sample core that corresponded roughly to the time period in which the brook carrying mine waste was being diverted around the lake.

From there, Ostrofsky continued to piece together the lake’s recovery through diatom fossils in the soil layers. Diatoms are unicellular creatures that look a bit like tiny glass beads. They are classified according to their tough, silica shells, which can often be wonderfully triangular, spiked, or star-shaped. Extracting and identifying these silica skeletons allows us to glean information about past climates.

To understand how diatoms might help scientists piece together geological histories, Ostrofsky offered the example of a cactus. A person would expect to find a cactus only in dry, desert climate.

“You can do the same with diatoms,” Ostrofsky said. “We can reconstruct what the environment must have been like based on which species were dominant.”

Models can suggest the likely pH of a lake based on the dominant diatom species at the time. In Ostrofsky’s case, the models of Sandy Lake signaled a tenfold acidity increase in the short period of acid mine pollution.

The Road to Recovery

Recovering from a terrible bout of pollution is a straightforward process for a freshwater body like Sandy Lake once someone eliminates the source of pollution. This is largely because most lakes connect to other bodies of water. Water is flushed out slowly, and a small lake’s contents can be replaced gradually over the course of a year or so.

Thus, after the polluting brook was diverted away from Sandy Lake the tiny lake naturally renewed its stock of water by feeding into larger rivers.

Though Sandy Lake lies close to three major population centers—Pittsburgh, Cleveland, and Erie—it has maintained its high water quality for many years. The lake’s private ownership keeps visitors to a minimum, and those cottagers who do lease property along the shore face strict rules against septic systems that would allow runoff to enter the lake.

And though the coal mine’s pollution was disastrous in the short-term, the brook diversion that resulted from the conflict effectively halved the amount of surface water draining into the lake from nearby areas. This is important because surface water accumulates artificial fertilizers as it moves across developed land. When nutrient-rich water reaches a lake, it can spark quick, out-of-control bursts of plant growth.

Paleolimnological studies, like the one at Sandy Lake, primarily consider what a lake looked like long ago. Still, they do so with a mind towards healthy lakes now and far into the future.
“It’s a pretty useful tool to reconstruct the history of any lake,” Ostrofsky said, “particularly when there’s an interest in lake remediation and improving water quality. It gives you a tool to set reasonable and attainable targets for lake restoration.”

Ostrofsky guesses that there are only about 300 other paleolimnologists active in the field. They make up a tiny and often overlooked community within ecology—but one that appreciates the value of what lies beneath a body of water.

Since Sandy Lake, Ostrofsky has moved on to a more challenging subject: Lake Champlain, which lies along the Canadian-American border. Unlike the much smaller Lake Sandy, Champlain is big enough to require at least 13 cores from different regions of sediment.

Ostrofsky spent the last year away from his classroom on sabbatical, where he finished up the analysis of those cores in his lab.

Still, he wonders if he will ever have enough time to do all that he wants to do.