Finding careers in the field: geology student explores his studies with hands-on research 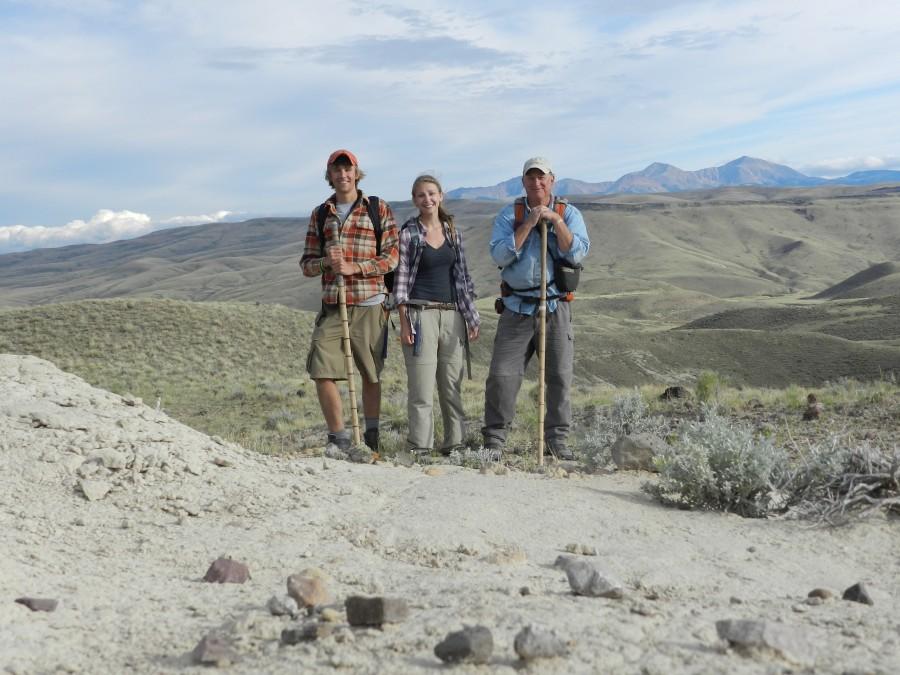 Lightning crashed as Doug Barber, ’13, forced his way through the thick, unyielding brush of the Montana countryside.  Barber and his research mentor, geology professor Bob Schwartz, had been wandering aimlessly for 20 minutes, hoping to stumble upon the path that would take them back to their waiting truck and their fellow research assistant, Lauren Schricker.

While searching for outcroppings of rock to sample, the two men had managed to squeeze through a small opening in the otherwise impenetrable vegetation that lined the Rattlesnake Creek bank, each carrying a 30-pound backpack filled with various rock samples, instruments, and supplies.

“Bob misread the clouds,” Barber said, thinking back to that day last July. “While we were collecting samples from the outcrop, the clouds came, and they came fast.”

Now the two were lost, and their previously inoffensive backpacks had become ticking time bombs.  As the storm above their heads grew larger, the metal in the backpacks transformed the two geologists into walking lightning rods. Their frustration quickly turned to panic when the rain changed from sporadic to biblical, and still every path they took led to a dead-end.

As they were trying to find their way, the pair also endured the ever-present fear of coming across something dangerous hidden in the surrounding brush.

“It was a pretty terrible place to get lost, right next to Rattlesnake Creek,” Barber said.

Thankfully, a lucky turn put Bob and Doug on the right trail.  The two emerged from the vegetation and heedlessly jumped into and across the river.

“We were soaking wet anyways,” Barber said. “It’s not like we could get any wetter.”

The two men ran the remaining distance back to the truck and prepared themselves for the long and chilly 45 minute drive back to their research cabin.  This is just one memory that Barber has of the many trips he has taken through his involvement in geology at Allegheny College.

When Barber first arrived at Allegheny, he actually had life science –not earth science –in mind; his original intention was to pursue pre-med.  But after stepping into an introductory geology class during his freshman year, Doug fell in love with the subject, and he has been hooked ever since.

Barber has worked several semesters as a teaching aid, research assistant and tutor for the geology department, just to get his daily fix of rocks. He classifies them, analyzes them, and compiles the data into neat, orderly reports to be presented at geological conferences.

To date, Barber has coauthored and defended five of these reports, called “abstracts,” at several national geological conferences, such as the Geological Society of America and the American Association of Petroleum Geologists.

Through geology at Allegheny, Doug traveled to barrier islands off the coast of Georgia, to the Blue Ridge Mountains in Virginia, and several times to Montana as a research assistant to Schwartz.

Barber’s research with Schwartz started in the summer of Barber’s sophomore year, when he was hired as a research assistant. That summer, he found himself (and two other students) flying down to Montana for four weeks.

They stayed at a remote cabin by some foothills in the Northern Rocky Mountains.  The cabin had four walls, a roof, and running water; by a geological researcher’s standards, Barber said, it was like living in luxury.

During those four weeks, the group would pile into a 4×4 pickup truck and drive out to their designated research grid, deep in the countryside.  There, they would search for outcroppings of rock, analyze, document, and collect samples, and then drive back to the cabin to compile their data.

What they hoped to gather from this information was an overall understanding of the tectonic and landscape evolution of Montana. In the geological community, the conventional belief is that the topography of Montana 45 million years ago was flat, in contrast to the mountainous terrain that exists in Montana today.  Other geologists, like Schwartz and his colleagues, believe that Montana was just as mountainous forty-five million years ago.

In order to provide an answer for this geological problem, the team began work on several small, simultaneous projects that branch into many aspects of geology and geological history.

Barber’s work in Montana was completed in pursuit of one such project: the delineation of a forty-five million year old paleodrainage network that represents an ancient Missouri headwater system.  Essentially what Barber and the other researchers were doing was mapping the location of ancient rivers that existed 45 million years ago.

Besides providing answers about the geography of ancient Montana, this research could help locate new potential sources of aquifer systems.  These aquifers could provide a great new resource of water for the arid regions of Montana.

After a long day of field work, it was common for the researchers (those who were already 21, at least) to sit around a camp fire and crack open a couple beers with a few of the locals, whom Barber described as “very friendly and interesting.”

“The Fourth of July down there was freaking insane,” Barber said. “We were walking through a central park in Butte, Mont., and everywhere you looked, people were shooting bottle rockets horizontally, at houses and at each other.  They’d fly by our heads at Mach 10.  It’s amazing no one was hit.”

After graduating Allegheny College, Barber will be attending graduate school and pursuing a Ph. D. applicable for a future career in the petroleum industry.  His interest in petroleum geology was sparked by two-week lecture sponsored by Exxon Mobil and a fieldwork-intensive course taken in August of 2012, immediately following his research in Montana.

Topping his list of potential graduate schools is the University of Texas at Austin.  There, he would enroll in an interdisciplinary program: a mixture of geochemistry, sedimentology, and tectonics.  After graduate school, Barber intends to obtain a research position with a large petroleum company, like Exxon Mobil or Shell, to help to devise new methods of oil exploration.

“I want a high pressure job,” Barber said. “I want to be challenged every day.  Geology’s something I’m willing to apply myself towards fully, and I know I’ll be completely rewarded, because geology rocks!”