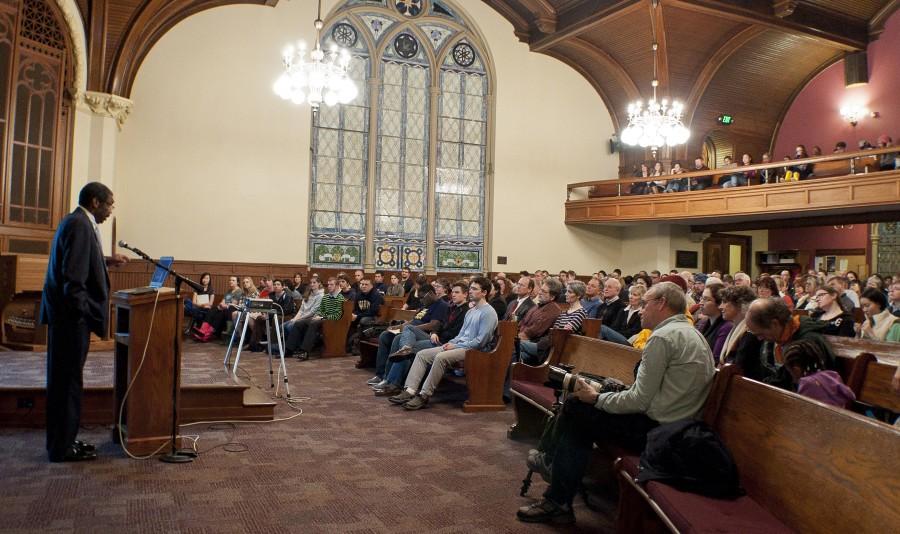 William E. Strickland Jr. (some know him as “The MacArthur Genius”) has a passion for art that inspired him to reach out to thousands of aspiring young minds across the nation.

Strickland, a 1996 MacArthur Fellow, gave a lecture Wednesday, Jan. 30 in Ford Chapel as part of the programming for the Year of Transforming Education.

The MacArthur Fellows Program, awarded to between 20 and 40 U.S. residents each year, recognizes an individual’s “extraordinary originality and dedication in their creative pursuits,” as well as “a marked capacity for self-direction,” according to its website.

According to Strickland’s official website, an art teacher with a knack for pottery inspired him to become an art educator when he was only a sophomore in high school. As a college student at the University of Pittsburgh, Strickland founded the Manchester Craftsmen’s Guild, an after-school arts program which he hosted in a donated rowhouse on the North Side.

“People are born into the world as assets, not a liability,” said Strickland.

Associate Professor of Psychology Dr. Aimee Knupsky, who is helping to coordinate the Year of Transforming Education, said she found Strickland an inspiring figure.

“He followed his passion with art…and he leveled the playing field in a creative way,” said Knupsky.
Strickland elaborated on his dream to better the Manchester community. He wanted to transform public education.

He spoke of his own hometown of Manchester, Pa.

“Kids were getting shot, and there were riots everywhere,” Strickland said. “There was so much danger in the streets of Manchester…that’s where the idea of art programs came from.”

Strickland found a way for his dream to grow into a reality: he is now president and CEO of Manchester Bidwell Corporation, a company encouraging students’ artistic abilities at a national level.

According to the website, the Manchester Craftsmen’s Guild Youth & Arts association sponsors classes in ceramics, digital imaging, photography and more. Additionally, it facilitates workshops, lectures and school visits from practicing artists. The association serves close to 4,000 students each year.

“We’ve got to save the public education system,” Strickland said.

In addition to founding the MCG, Strickland also began leading the Bidwell Training Center in 1971. The Center was instrumental in offering vocational training to Pittsburgh workers who were left without jobs when the steel industry suddenly declined.

Today, the BTC provides market-driven career training, according to Strickland’s website. It offers accredited diploma programs and Associate’s degrees in fields such as the culinary arts, chemical laboratory technologies and horticulture.

Strickland explained that the Bidwell Corporation is a non-profit organization that seeks to benefit at-risk youth. It has launched various National Center for Arts and Technology (NCAT’s) across the nation. These centers provide creative and innovative ways for young students, as well as disadvantaged adults, to develop through art.

There are even musical recording groups at some of the sites, and one staff member has worked with Alicia Keys, Strickland said in his speech Wednesday.

The NCATs have shown great progress. Dropout rates have decreased by five percent since the NCAT site arrived in Grand Rapids, MI.

Participation at these sites has been so strong that now many sites have waiting lists.

What began as a single thought ten years ago resulted in art education centers spanning across the U.S. in Pittsburgh, Cincinnati, Cleveland, New Haven, San Francisco, Grand Rapids and more. There is also a site in Vancouver, British Columbia, Canada. The company’s newest addition is a site in Buffalo, N.Y.
Strickland said he plans to have 200 centers in total: 100 each within and outside of the U.S.

Associate Professor of Economics Dr. Stephanie Martin, another YOTE coordinator, said she was impressed by Strickland’s space rate, or how his program expanded and grew.

“He promotes treating children not as dealing with business, but as assets [themselves],” said Martin.

Strickland pronounced himself amazed by the breadth of his program’s span across the country. Once, when giving a presentation at an orthopedic surgeon’s conference, he soon learned that one of his audience members was once a student at one of his programs.

“The idea is to let people know that they can do the impossible,” Strickland said.

“There are many things that are believed in but can’t be seen, and inspiration is one of them,” Knupsky said. “[I’m] one witness to this inspirational presentation in Meadville to the Allegheny population.”