Top 5 Resolutions: How science can move forward in the new year 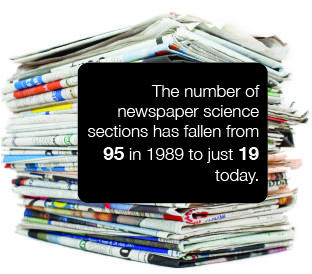 Science enthusiasts looking back at last year’s list of scientific accomplishments will find a lot to be proud of. NASA sent its Curiosity Rover to Mars in preparation for decades of research on the red planet. Physicists at CERN may have discovered the Higgs boson particle they’ve been seeking for years. These discoveries reaffirm what science can accomplish in the face of enormous obstacles.

But there is always room for improvement. So, here is a recap of recent issues that members of the scientific community might work to bring into the spotlight in 2013.

1. Address the gender gap in science.

In the 1960s, less than 6 percent of scientists were women. Today, women earn over half of all degrees awarded in the life and social sciences.

Though a large number of female students now receive degrees in biology and psychology, reports find that they still earn lower wages after graduation compared to their male colleagues–the National Science Foundation reports 16 percent less at the bachelor’s level and 9 percent less at the master’s and doctoral level.

Above:  The European Commission’s campaign to attract women to science offended many in the field because of its flashy stereotypes.

Last year, a Yale study revealed that female job candidates face a surprising amount of gender bias in their job search. Faculty hiring committees were asked to evaluate faux resumes for a laboratory manager position; all resumes were identical, except that some resumes were signed with a male name and others with a female name. Faculty not only preferred the male hypothetical hire, but also regularly offered larger starting salaries to the male candidate.

The complexity and occasionally unconscious nature of gender bias makes it an even more difficult issue. There is no one group at fault, and many community members might not even be aware of a problem. For example, the female hiring committee members in the Yale study also preferred the hypothetical male candidate –a preference which suggests that stereotypes about women in science might affect us inadvertently.

As long as we allow these major gender biases to continue, talented women will continue to “leak” out of the scientific pipeline –stopping short of traditional goals like academic tenure– in search of alternative career paths.

Really, the entire issue is tied to a much larger cultural debate, and the solution extends far beyond the scope of any one professional community. But the scientific community needs to be proactive. Last year’s Yale study was important in that it exposed an unconscious bias that some had doubted could exist within a field grounded in careful, rational thought. Now is the time to move forward with that momentum, with the discursive force that moments like this Yale study provide us, and to contribute to the larger social movement for equal rights in the workplace for women.

2. Examine the recent increase in scientific misconduct and the related retraction of papers.

Mistakes happen in science. When a major error is caught in a published paper, the paper is retracted from the literature. The ordeal can be embarrassing for the paper’s authors, but the misstep can be forgiven if it occurred honestly.

At the start of the millennium, retractions numbered about 30 per year. In the past decade, however, retractions have spiked ten-fold.

An exhaustive study published in the Proceedings of the National Academy of Sciences has just revealed that the leading cause of retraction in the biological sciences is not error, but deliberate misconduct like plagiarism and data falsification. 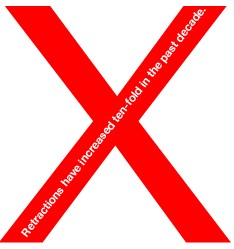 The cause of the reported spike is not yet entirely clear. It’s possible that increased scrutiny within the scientific community, fueled by outlets like the watchdog blog Retraction Watch, has artificially boosted retraction rates. But if more misconduct really is taking place, we need to ask ourselves the difficult questions–does the current scientific culture encourage such intense competition for quick and constant publication that it pressures a subset of researchers into cheating the system?

The sooner we can be sure that we are not inadvertently incentivizing misconduct, the better.

3. Consider how scientific information is translated into policy, and how scientists interact with lawmakers and politicians.

Few moments created a bigger stir within the global scientific community last year than the indictment of six Italian seismologists accused of failing to communicate the danger of a deadly earthquake in L’Aquila, which claimed the lives of 297 civilians. By the end of the legal process, each of the scientists had been convicted of manslaughter and sentenced to six years in prison.

After the conviction, several Italian scientists resigned from their governmental posts. Elsewhere, members of the scientific community expressed outrage at what they believed to be a lapse in understanding between politicians and scientists.

The trial in L’Aquila highlighted a vital set of questions: what should policymakers reasonably expect from scientists, and what kinds of protections should scientists be afforded when their expertise has practical applications in policy?

The interactions between science and politics will only become more important as legislation on topics like global warming, vaccination policy, conservation and sustainable agriculture are debated further in public forum.

It is becoming less acceptable for scientists to avoid public debate as they often have in the past, or to explain themselves only through impenetrable jargon. The scientific community would do well to encourage its members to become more involved in science policy, whether it be by pursuing it as a career or by advocating for it from the bench.

4. Talk about how the Ph. D. system should look in the future.

Postdoctoral study is often seen as the logical, and perhaps singular, conclusion to an undergraduate career in biology. Students are strongly encouraged by the current scientific culture to seek a Ph.D. and eventually secure their own laboratory at a research institution.

But Ph.D. students are struggling in the current job market. Right now, many students get by with low pay, accepting a long string of post-doctoral positions while they wait eagerly for a tenured university position that is statistically unlikely to open up for them anytime soon (only 14 percent receive tenure track positions within six years of graduation with a Ph.D.).

For too many scientists, this perpetual post-doc environment also means a constant source of stress stemming from academic competition, economic hardship, and a general lack of job security and family opportunity.

“Unless we are more accountable to our Ph.D. students,” writes Dr. Mary Ann Mason of the University of California at Berkeley, “we will no longer attract the best and brightest to a profession that requires a commitment of a good chunk of someone’s young working life to train for a stressful, underpaid job that might not be available.”

Mason is right. A lot of heavy sacrifices must be made in the early stages of a scientific career. But should these young scientists have to make so many? We need to think about improving the Ph.D. environment quickly, or else stop encouraging so many students to devote long stretches of their lives to the task.

5. Invest in science and science communication as a culture–both economically and intellectually.

As the United States government continues to wrestle with budget cuts, the Research and Development budget sits vulnerable before a House majority that has tried its best to cut non-defense spending for the past two years.

We cannot afford fewer resources devoted to science in 2013, or at any point in the future. Scientists already spend an estimated 40 percent of their time wading through governmental forms as they write grant proposals to fund their work. In this system, too, proposals with immediate practical application fare better in the pool than equally important basic research requests (which becomes a problem when basic research only received 7.5% of the federal budget last year).

For the scientific community, intellectual support might mean making an effort to work more seamlessly with journalists and other media specialists responsible for conveying scientists’ work to rest of the world. It means building a trust with the public by engaging in logical and empathetic argument where it is needed, and by considering when a vitriolic tone could be destructive. It means emphasizing communication skills to science students at all levels, so that the effective scientific communicator becomes the standard rather than the exception.

A culture that appreciates and understands science is more likely to fund it in the future. Newspapers have cut science sections, from 95 in 1989 to just 19 today, but the public is more interested in science now than ever before. Economic support will follow intellectual support. Times are hard everywhere, but there will always be things we shouldn’t agree to sacrifice. Science is one of them.