Cooking with science: Bring the chemistry of the lab into the kitchen 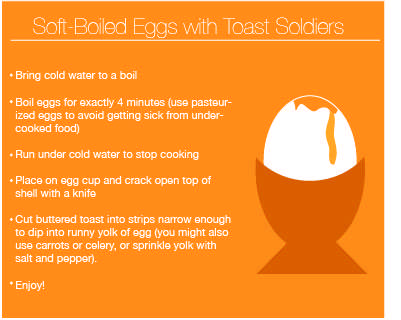 Cooking breakfast for family and friends turns into a complicated ordeal when each person likes their eggs to be prepared a different way. More adventurous eaters might put in a request for eggs Benedict with Hollandaise or–to the dismay of whoever is preparing food that day– a full English breakfast with a soft-boiled egg, while the traditionalists may prefer the simplicity of a side of scrambled eggs with their toast.

So what accounts for the dozens of different ways to prepare a single egg? The answer is simple: temperature.

Eggs are so sensitive to small changes in temperature that New York City chef and molecular gastronomist Dave Arnold, who presented in Harvard’s “Science and Cooking” course lecture series in 2010, announced to students that he could come close to guessing the temperature of a pot of water just by cracking open an egg boiled in the water.

“It turns out that eggs are actually a better thermometer than most any other thermometer you have in your kitchen,” said Arnold, in the video lecture (skip to 1:13:00) now available online.

Eggs contain a multitude of different proteins, all of which coagulate at different points in the heating process.

An egg cooked at 57 degrees Celsius (135 F) will emerge still raw, but just five degrees hotter and the egg will come out perfectly poached. The yolk sets at 64 Celsius, and the whole thing is hard-boiled by 70.

Arnold performed his demonstration with an industrial machine called an immersion circulator, which keeps the liquid in a container at precise, constant temperature throughout cooking.

Such tricks help restaurants maintain consistency in their dishes, which is the ultimate goal of any dining operation. The circulator is also helpful when it comes time to cook large batches of a single dish –say, a catered breakfast of poached eggs for a dining room full of people.

Bread-making is a meditative process. It takes a lot of care–the kneading of dough, the dusting of flour. The waiting, as the dough rises beneath its cover.

It is an art, like much of cooking, but it is also a science.

Begin by moistening flour with water and yeast. You are forming gluten, a protein that will give your dough its elasticity and form. As you do this, the yeast will start to ferment the sugars in the flour. Yeast are organisms themselves, part of the kingdom Fungi, and they feed on the sugars and starch you have given them here. The fermentation reaction releases carbon dioxide gas, which bubbles up in the dough.

All of the physical mixing that you are doing–all of that arm muscle–is strengthening your dough as much as it is strengthening you. With each molding of the dough, layers of gluten stretch out and trap pockets of carbon dioxide. The carbon dioxide relaxes the gluten molecules and exposes more of their structure so that hydrogen bonding can occur with starch. This bonding holds things together for the moment. 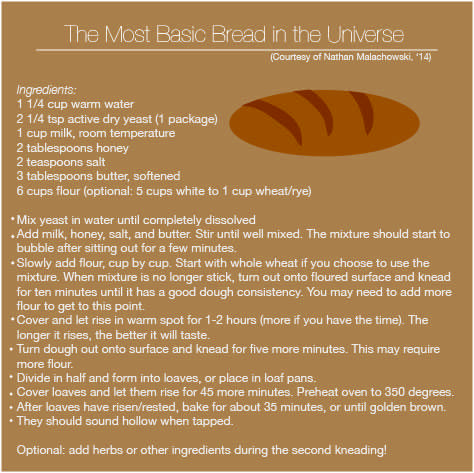 As you wait for the dough to rise, the gluten shifts in place and the carbon dioxide builds. Next you will cut the dough and release the gas. And you will do this again and again, to build flavor as the yeast works. It will rise slowly.

Industrial bakeries have developed shortcuts that you cannot take; they add a lot of yeast and knead the dough at incredibly high speeds with large machinery. To keep bread from becoming stale, breadmakers can add fat to the dough mixture.

Molecules in fresh bread align as they are cooling out of the oven, ultimately forming a crystalline structure. These structures require water, and so the bread loses its delicious texture as it grows stale. But fats are hydrophobic; they repel water. Fatty dough slows water loss and extends shelf life.

As for you, you’ll just have to eat your bread before it loses its freshness.

Some things are more complex than they look. Cheese, for example.

Cheese is, at its heart, milk that has been separated into its parts. Milk is mostly water, but it also contains other things like sugars and proteins. Cheese curd forms when the coagulated protein separates from the liquid whey.

Next, cheesemakers add enzymes in the form of something called rennet to coagulate milk proteins. These enzymes are naturally produced in mammalian stomachs, and traditional cheesemaking rennet comes from the stomachs of young calves (though there are now vegetarian sources as well). Different stomachs produce different rennets, and some people use goat or sheep rennets for certain cheeses. 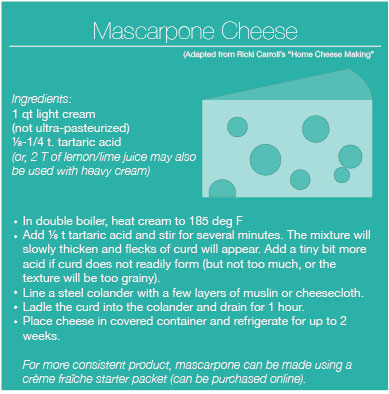 According to folklore, rennet was discovered in ancient times by a resourceful shepherd or maybe a traveller. Milk was often carried in bags made from animal stomachs, and the residual enzymes may have turned a batch of milk into a batch of cheese curds and whey. It’s also possible that butchers may have noticed curds forming in the stomachs of young farm

animals as they cut apart their meat.

Acids can also be used to form curdle (this is why, generally, it is frowned upon to add a citrus flavor to your French soda in Grounds for Change). This acidifying process creates soft cheeses like cottage cheese and cream cheese. Because many flavor-enhancing enzymes are deactivated in the acid-curdling process, these kinds of cheeses tend to be blander than others.

Once curds have formed from the addition of an acid, they can be separated out of the mixture with the use of cheesecloth or muslin.

Cheesemakers alter the type of cheese they create by making changes to the bacterial strains, rennets, pH, and aging times that they use. Bleu cheese, for instance, is inoculated with Penicillium via a skewer, which forms the veins you can observe in the final product.

Physics comes into play in cheese-making sometimes, too. Some varieties are created with specific uses in mind and these need to have certain melting properties for an ideal product. As a result, food scientists have learned to alter the composition of cheesemaking ingredients to anticipate those needs.

You can make your own simple cheeses, if you wish, by utilizing these kind of biochemical reactions in your kitchen.

Something like Mascarpone cheese can be expensive to buy in the store, even though it can be sweetened with sugar and cream for use in desserts (cannoli, tiramisu, tarts, or as topping for fruits like currants and black cherries along with a drizzling of honey and vanilla), used as a savory ingredient (melted over pasta or roasted vegetables), or eaten plain with figs, apricots, or crackers.

Luckily, it’s a  relatively simple process to make your own Marscarpone (or any variety of cream cheese).