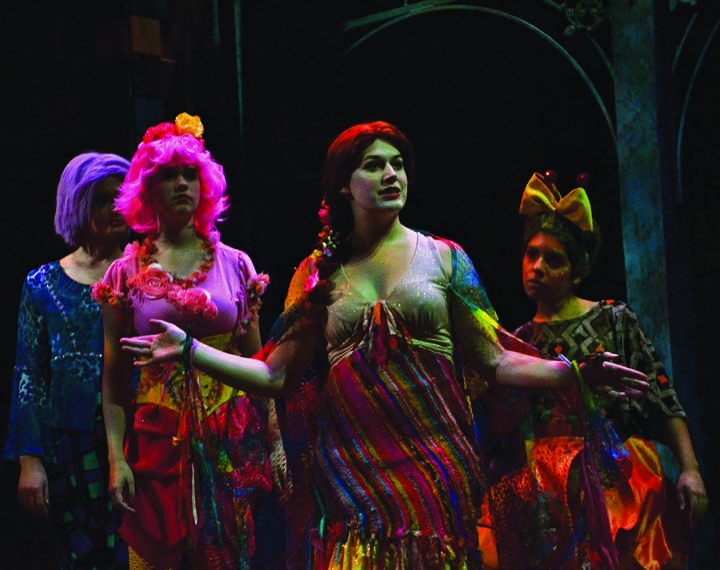 Colleen McCaughey, ’13, enters the stage as Titania, Queen of the Fairies with her train in Allegheny’s production of “A Midsummer Night’s Dream.” CARLY LUITGAARDEN/THE CAMPUS

The Allegheny Playshop Theatre will present “A Midsummer Night’s Dream” this weekend with a new modern spin. This Shakespearean play directed by Dan Crozier features original music, a two-story set, gender-bending in various roles, and modern flair from costumes to props.

Freshman Allie Schneider, who plays Hippolyta, said this version of the play is edgier than other performances.

“I know a lot of people know of Midsummer’s Night Dream, it’s a very popular Shakespeare,” she said. “But I think they’re going to be surprised by the set, by the costumes, by some of the lines, by how we play things. It’s a little bit avant-garde, a little bit on edge […] It’s not the same old medieval stuff that you’ve seen before.”

Senior Austin Scales who plays Demetrius agrees with Schneider in that this particular production is unlike others.

“It’s definitely a unique take on the story. I wasn’t expecting them to go in this direction. It’s not your typical Shakespearean flavor,” he said.

Sophomore Lizzie Thompson, who plays Hermia, said the idea of Shakespearean language shouldn’t scare people away. Making the language relatable has been their goal.

Director Dan Crozier said the language may sound difficult, but the audience should catch on quickly.

“You think 417 years, you have this huge gulf, but it’s still ours,” he said. “It’s our language. We can really get it if we work hard as actors. I wanted to try to make it so it’s not hard work for the audience so they can follow it. That’s our job.”

“If you’re lost in the first three minutes, don’t feel bad,” he said. You’ll get what we’re saying.”

Sophomore Adam Zahren who plays Puck said the most interesting aspect for him was the set.

“My favorite part is the set just because it adds a whole new dimension for us to play on, thoroughly enjoy, and just explore and experiment with,” he said. “This awesome addition, I feel, has just added to everyone’s performance and given everyone just a spark that was desperately needed.”

“It’s a very big set and a very intricate set as well,” Dikec said. “There’s a bridge that spans it, there’s two towers, and a giant set of stairs. It looks beautiful. […] I feel a lot of people will be shocked when they see the set for the first time.”

After helping build the set and act on it, Scales said he feels it’s “otherworldly.”

“This is definitely the most complicated set and one of the biggest, and most involved that I’ve ever worked with,” he said.

Dikec also said he recognized the challenges that arise with a set that features many complex elements, including a waterslide.

“There are challenges you may not have when you’re not working on the set, but then again you also don’t have water slides in everyday life,” Dikec said. “You get to have a lot of fun on the set, but you also have to understand you have to change your actions depending on the set as well.”

Thompson said acting with the water slide was the most difficult challenge to overcome with the set.

“I think the water’s challenging,” Thompson said. “I think it’s something that actors aren’t used to working with on stage. It’s unpredictable.”

Zahren said working with bending gender-norms is also unique to this show, with Puck, Oberon, mechanicals, and Egea all being varied.

“We’re doing a significant amount of gender-bending with Puck and Oberon specifically,” he said. “We’re really taking advantage of androgyny to the best of our ability, which just working on a show that questions gender-norms and asks actors to move outside their comfort level of their gender norm is really exciting to do and really exciting to work with.”

Junior Maggie Boone, who plays the traditionally male character Oberon, said the gender-bending of characters also presents a challenge and a unique perspective.

“For this performance, I never would have thought to have been cast in this role just because I’m usually maternal characters or funny characters,” Boone said. “So this has just been really interesting to explore power and gender roles because Oberon is typically a man. The way I’m trying to play the character is not really gender specific as much as just powerful and so that’s been really difficult.”

Boone said while the show may be different from prior expectations, the unexpectedness is why people should attend.

“I don’t think people would normally expect me to come on stage wearing all black makeup and a cape and a weird spider bracelet, but I just feel like it’s something that people need to see because it’s about a lot more too,” Boone said.

Zahren said he also thinks the different perspective makes it an engaging and unique show.

“I think that it really puts Shakespeare in a really fun mood and it’s not like people would expect a Shakespeare show to be,” Zahren said.

He said he thinks if the audience puts for the effort, they’ll be able to enjoy the show.

“This in particular has been a really in-depth show,” Zahren said. “We’ve worked a lot with the language to be able to communicate with the audience what we’re trying to say even though we’re speaking in a way that’s typically unfamiliar to most people. But I think if people would give it a shot, and step outside their comfort zone for an hour and a half, they might really walk away with something spectacular.”