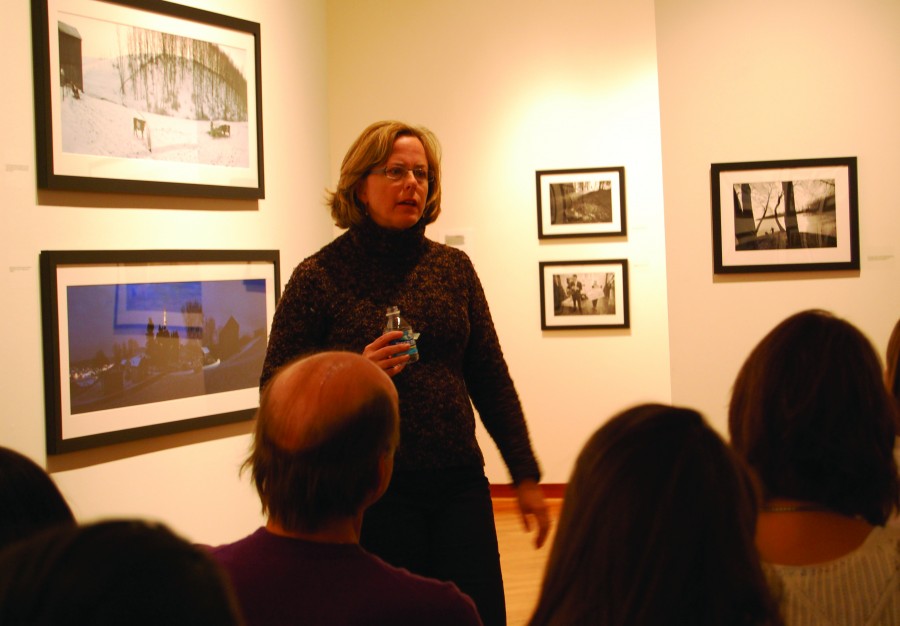 Martha Rial speaks about her experiences with the project at the Pittsburgh Filmmakers Center for the Arts on Wed. 14, 2012. MEGHAN HAYMAN/THE CAMPUS

As the fracking debate rages at Allegheny and across the country, photographers such as Martha Rial are working to show the human side of the energy industry.
Rial, who won a Pulitzer Prize in 1996 for her work in Rwanda and Burundi, presented her work alongside five other photographers in Pittsburgh this Wednesday.
The exhibit, the culmination of the Marcellus Shale Documentary Project, showcased activists, workers and citizens from across Pennsylvania engaged with the controversial practice of fracking.
Rial’s favorite subject in the project was Jeanne Williams, a goat farmer in Greene County.
“She’s the real thing,” said Rial. “She practices very sustainable farming. For example, all of her livestock drink from springs that come off the mountaintop. So she has a lot to lose.”
When approached by an energy company about gas exploration, Williams and her husband agreed to lease their land.
“What I liked about Jeanne’s story is that I thought she was savvy,” said Rial. “There’s often a very big divide on this issue. I really wanted to meet the people in the middle. And I was impressed that she managed it. She even negotiated that [the energy company would plant] certain grasses for her goats after drilling.”
Rial met Williams at an Isaac Walton League meeting in Greene County. The IWL, one of the nation’s oldest conservation groups, had been especially active since energy companies came to Greene to drill. Rial spoke at the meeting upon arriving in Greene County, asking people to share their stories. Williams agreed, and Rial’s work took off.
But even for the veteran photographer, the project was a challenge.
“I’ve never done environmental work before,” said Rial. “It’s often very difficult because sometimes the main character is lacking. He or she is not always evident.”
Rial was excited to contribute to the ongoing debate about American energy.
“The mere fact that more and more people are talking about it I think is terrific,” said Rial. “When we go and pump our gas or we turn our heat on in our homes, that all comes at a cost.”
The exhibit will be displayed at the Pittsburgh Filmmakers Center for the Arts until January 6, 2013. The photos can be accessed at http://the-msdp.us/msdp.