Behind the scenes of Parkhurst: An inside look at the people that cook more than 20,000 meals per week 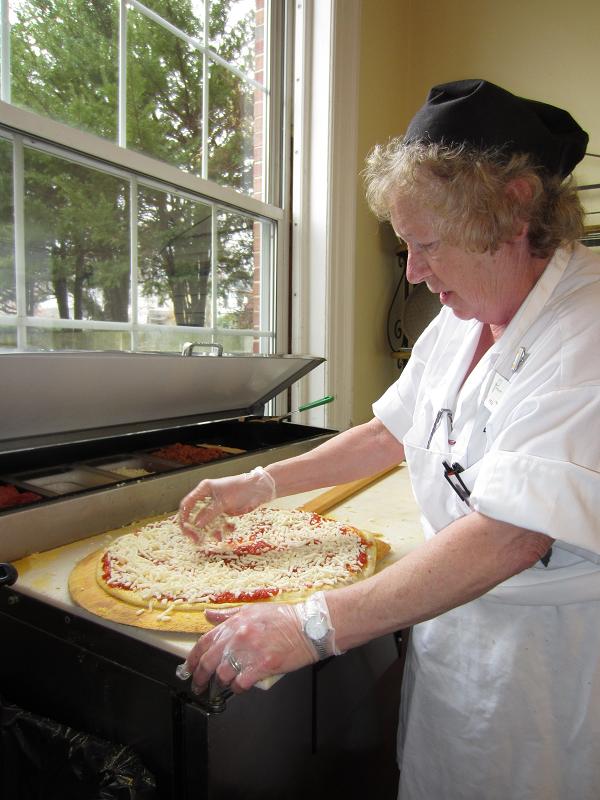 Pizza-maker Peg Bates makes a cheese pizza for lunch on Wednesday. She enjoys making BLT pizzas most because they are easy to make. They also happen to be her favorite pizza to eat. CHELSEA FLEISCHMAN/THE CAMPUS.

It’s just after 10 a.m. as the last few straggling Brooks’ breakfast goers clear their plates and head off to class. The atmosphere in the dining room is very different from what it will be in just an hour or two’s time: no lines of students or backpacks thrown across tables, no food under the various station’s heating lamps and for once, the ESPN announcers on the TVs can actually be heard.

But behind the stations, several cooks, dining room assistants and dishwashers are hastily preparing for the day’s remaining meals.

Breakfast workers arrive around 5:30 a.m. to open for the 7 a.m. breakfast. Not much preparation is required for breakfast as the food is simple but it does take time for the equipment to heat up. Employees then focus the rest of the breakfast time on lunch.

“So we have people that have nothing to do at breakfast, but they’re preparing for the next meal and they may be prepping ahead for dinner, if that’s required, and they may be prepping ahead for the next day’s lunch as well if certain items need to be thawed or if there’s multiple steps in the process,” said Michael Zanie, general manager of Parkhurst Dining at Allegheny.
Approximately 143 Parkhurst Dining employees work between Brooks Dining Hall and McKinley’s Food Court to serve nearly 22,000 meals each week, he said.

Kitchen workers, dining room attendants, dishwashers and cashiers comprise 91 of the 143 employees and are in the United Food and Commercial Workers Union, Local 23. Eight managers, 30 student workers, two high school interns and about a dozen supervisors and sous-chefs make up the remaining campus Parkhurst employees.

“In general we do about 1,700 meals per day in each building,” said Zanie. “We do maybe up to around 200 for breakfast on average at Brooks, about 700 on average for lunch and about 800 for dinner.”

Because McKinley’s hours are more continuous, Zanie said that roughly 40 percent of the food served is for the lunch rush.
They don’t always need to make 22,000 meals per week, though. Zanie said that meals fluctuate by the day and week, depending on class schedules and events.

To track consumption Parkhurst relies on an electronic system that operates the swipe stations and cash registers. It gives 15-minute counts so that they can track the number of dinners for each meal at Brooks and a menu count at McKinley’s, telling them how much they sell of each individual item.

In an attempt to ensure as little waste as possible, Brooks’ kitchen workers cook to the pan: the meal may be prepared and staged but it isn’t heated until necessary.

“Sometimes we get caught and we have to make people wait a little bit but at least the food is fresh,” Zanie said. “That’s the reason why it’s sometimes a little bit slower than may be ideal. You don’t always guess right.”

Aside from relying on student feedback through comment cards, website suggestions, email requests, occasional surveys and even menu submissions, Zanie said that much of their feedback can be found in the dish-room.

Parkhurst must also look to accommodate the changing opinions on campus as each year nearly 400-450 students graduate and 600 new first-years arrive. But during that summer period, and even academic breaks, when students leave campus, he said Parkhurst stays busy.

“We don’t really have as many breaks as you might think we do,” he said. “Fall break we were still open on a limited basis, even though most of the students were gone and we’re open almost every week of the summer to some degree or another.”

“A lot of folks work as many hours as possible during the school year to build up their average so they can afford to take unemployment during the slow months,” he said. “Some folks just try to work year round and there’s different strategies in between. It really depends on the person’s situation.”