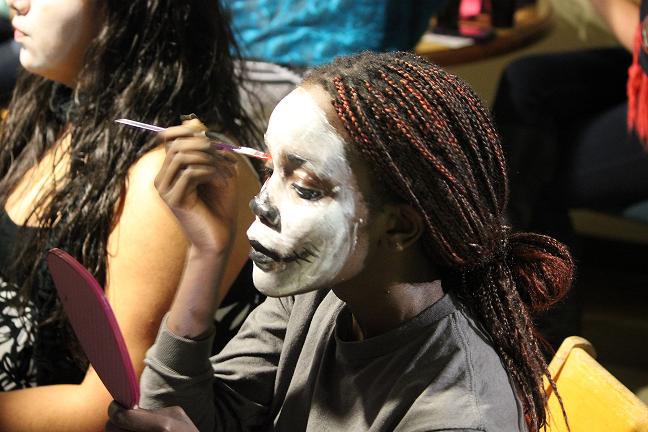 At a late-night event on Oct. 27 in the Campus Center, students made sugar skulls and papel picado, tissue paper that is cut and designed for decorating. Their creations were later taken to Grounds For Change to be placed on an altar display.

The altar, piled high with brightly colored decorations and memorials of loved ones who have passed, is more than just a piece of artwork in this celebration.

Veronica Dantán, professor of Spanish and advisor of Unión Latina, described the significance of the skulls and the altar in the Día De Los Muertos tradition.

Dantán explained that each sugar skull is dedicated to the life of an individual human being, alive or dead. One can even make a skull for himself to reflect on life’s temporality.

Each life being honored also receives an altar which should reflect what the individual was like when he or she was alive. Typically altars are decorated with items such as the individual’s favorite music, food and drink.

“In that sense, we feel their spirit and their influence in us are still present,” said Dantán.

Unlike a gravestone, which have a sorrowful connotation, the altar welcomes the dead’s spirit to remain among the living.

“It is like saying, ‘We haven’t forgotten you. We know you are with us at every moment but today especially,’” said Dantán.

He said that Día De Los Muertos is a two-day event. The first day honors children that have passed; the second, adults.

“It is different from Halloween, where you think of demons coming at you,” Shah said. “It is instead a joyous day.”

Sharon Zavala, ‘15, explained that Día de los Muertos is based off Aztec traditions that date back to the sixteenth century.

“Although this celebration is associated with the dead, it is not portrayed as morbid or depressing but rather a time of happiness, color and fun,” Zavala said in an e-mail.

Participating in events such as these help to preserve ancient culture.

Ziania Narvaez-Garcia, ’15, believes Unión Latina has helped her learn more about her own culture.

“Although my family has always known about Día de los Muertos, it was not something that we actively celebrated,” Narvaez-Garcia said in an e-mail

At the event held in North Village, Dantán gave a lecture titled, “Ranchera Blues Over A Rainbow: Celebrating the Life and Death of Chavela Vargas.”

The lecture focused on the life of Chavela Vargas, a famous female Mexican Rancheras singer.
This type of music often dealt with a man’s unrequited love, accompanied by a small ensemble of instruments similar to a mariachi band. Vargas sang in this style, with her open identity as a lesbian, breaking the barriers of what it meant to be a Rancheras singer.

Vargas was iconic in her ability to re-define the Rancheras genre. Dantán said she believes it is important to celebrate Vargas’ life in the context of Día de los Muertos, because she was an influential woman in the past, present and future.

“Vargas opened up new paths for women and men that came after her,” Dantán said. “She gave many of us hope for new roads of the future.”

“She is interested in showing how multicultural the United States was,” Hernández said.

He said he believes that not many people consider this an important topic, and for this reason Dworkin’s visit should be informative.

Hernández added that the celebration of Latino Heritage Month as a whole is important. People can evoke memories from the past and learn more about themselves in the present.

“We want the community to know more about the cultural meanings of these celebrations,” Hernández said.

He encouraged the Allegheny community to learn about Latin-American heritage by participating in the month’s events and experiencing the culture for themselves.

During the rest of the month, Unión Latina will sponsor a fundraiser for the Pulsera Project to help improve economic hardships in Nicaragua.

Additionally, AquiTango, a quartet of musicians accompanied by two tango dancers, will also visit campus to explain the significance of tango dance and music. This event will include music along with an explanation of the genre and a tango dancing performance.