From Allegheny to Afghanistan 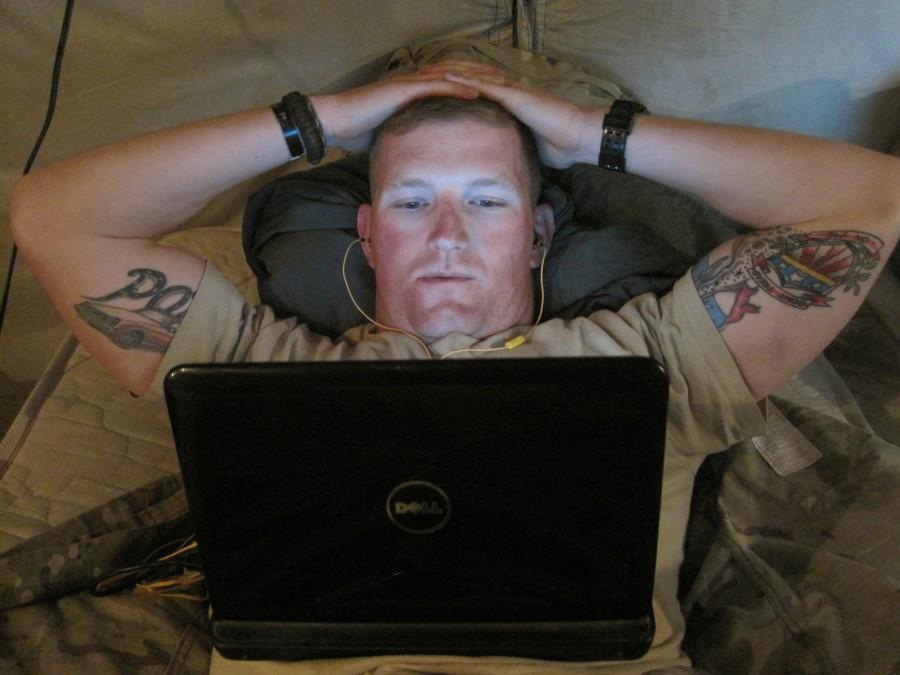 Allegheny alumnus and U.S. Army veteran, Sergeant Robert Taylor, was not expecting a reunion with his old football coach, Mark Matlak, when he signed on to talk with Professor Cheryl Hatch’s news writing class.

The Skype interview that reintroduced the former player and coach shortened the 3,887 mile distance between Taylor’s station in Fairbanks, Alaska and the classroom in Meadville, Pa.

Taylor, 31, was born in Morristown, N.J. to a blue-collar family and raised in Tampa, Fla.

He gave credit to his father for much of his own success and for teaching him the importance of confidence and rationality.

The tattoo that Taylor has on his right bicep of a ’77 El Camino and the word “Pops,” the name he called his dad, helps him remember these lessons. He got the ink in 2001 after his father died of cancer.

The tattoo is a constant reminder to Taylor that his dad is always with him.

Taylor, who is now starting his own family, hopes to be a similar father figure to the child that he and his wife, Liza Jane, are expecting in March.

Liza Jane transferred to the University of Alaska Fairbanks to be closer to Taylor at his station in Fort Wainwright. She is studying sociology.

“I guess the answer is…I haven’t figured it out yet,” Taylor said when asked how he plans to balance his new family with his military career.

Taylor said he prides himself on the importance of his family, but also credits his success to the relationships he built during his time at Allegheny College, specifically on the football team.

“Allegheny football was a huge part of my life. You know, you always hear about team sports…but it’s a family,” Taylor said.

Taylor’s father died during football season. Matlak helped him cope by speaking to his professors so they would give him extra time to complete his assignments.

The support that Matlak provided for Taylor extended their relationship beyond the football field.

During his Allegheny football career, Taylor started as a running back and then transitioned to special teams and defensive back.

He graduated with a major in Economics and a minor in English.

When Matlak coached Taylor, he explained to the team that they always needed to play the next play and move on, and Taylor applied this advice to another part of his life, the military.

Taylor knew he wanted to join the military in high school, but went to college because he was not ready to quit playing football.

After graduating from Allegheny, he worked for Northwestern Mutual Life Insurance and Financial Services in Pittsburgh until his sister became pregnant and he transferred closer to home to the Tampa office.
At 28, Taylor decided to join the Army.

Taylor was assigned to be the 2nd Squad Bravo team leader who would patrol areas in Afghanistan during combat operations.

He held a mine detector and was responsible for clearing the area for his team.

Taylor said that the relationships that he formed with the other soldiers in Charlie Company were similar to his relationships with players on the football team, because teamwork was imperative in ensuring success.

“You create a team; you create an atmosphere,” Taylor said, “Offense and defense, they become your family because you do the same thing day in, day out.”

Taylor learned to rely on the other men he was with, which helped him maintain his confidence.

Currently, Taylor is stationed in Alaska until 2013, where he has taken over a position within Charlie Company and is now in charge of 13 soldiers.

He has plans to make a career out of the military and eventually retire as a commissioned officer in the U.S. Army.

Taylor said that, if his child were a boy, he would support his decision to join the military if he wanted, just like his father supported him.

“I’ve definitely become passionate about what I do, which has given me a little bit more purpose,” Taylor said.

He emphasized that it’s not necessary to have life planned out completely before college graduation.

“Find something you’re passionate about,” he said, “The day you graduate, you don’t have to know that answer.”

Before signing off, Matlak said goodbye to his former student.

“I want to tell you I love you, take care of yourself, and God bless.”