A Mystery in Captivity

Shark spines reveal what we may be missing about captive conservation

In the past fifty years, sharks have moved out of relative obscurity and into the heart of American pop culture. The 1975 release of Jaws established the image of shark as vicious man-eater. Modern media like the Discovery Channel’s annual Shark Week series has since created its own, more nuanced image of a harmless and largely misunderstood animal.

Still, when we venture off to the aquarium to see a living, breathing shark for ourselves, we expect to find a menacing creature staring back at us. We pay our admission for the thrill of proximity to a dangerous thing, even as a layer of glass removes us from any real threat.

And few sharks fit our idea of “sharkiness” as perfectly as the sandtiger shark. The sandtiger’s body, which can stretch out to 10 feet or more, is a bulky mass of muscle that helps to propel the animal through the shallow, coastal waters around North America. The animal’s head tapers off at the snout where the jaw rests naturally ajar –just wide enough to reveal the jagged rows of teeth that overlap, curve inwards, and jut out in all directions.

Despite its intimidating appearance, the sandtiger is a well-behaved shark. It is slow-moving and calm, an animal that keeps mostly to itself even in the midst of other aquatic life. Because of this, the sandtiger has become the darling of modern shark captivity and the most widely displayed shark species in the world.

It was surprising, then, when zoos and aquaria first began to notice that a strange thing was happening to their sandtigers; nearly a third of them were developing misshapen spines. These spinal deformities ranged from subtle bends that emerged only in post-mortem analysis to grotesque, dramatic bulges visible even from a distance in the backs of live sharks. The latter, more severe instances almost always required euthanasia.

Necropsies revealed what was happening inside some of the worst cases: knots of calcified fractures and spines pinched up in the middle, held there like a kink in a hose. Sometimes, fractures were small and spread evenly along the spine; often, though, they were singular and fatal –a striking upward bend between the dorsal and lateral fins of the shark.

In 2008, Dr. Daniel Huber of the University of Tampa began to work on a shark spine survey, which asked zoos and aquaria to donate the spines of sandtiger sharks that had died of either natural causes or deformity-prompted euthanasia.

Huber shared his research at the biology department’s annual Darling Lecture on Tuesday. He obtained his Ph.D. while studying biomechanics, an emerging interdisciplinary field that seeks to apply the principles of engineering to biological systems. His work has focused on the architecture of a shark’s body –the force of its bite, for instance, or the structure of its skeleton.

After signing onto the shark spine project, Huber and his colleagues began evaluating the physical properties of captive sandtiger sharks’ spines. The group measured things like the amount of crushing force that an individual vertebra could withstand before it suffered irreversible damage; they measured the stiffness of the spine, its range of movement, and how far it could bend without breaking.

Ultimately, Huber found that the average captive sandtiger shark spine is much weaker than those of other wild shark species. The sandtiger spine is so much weaker, in fact, that it seems to be why the species is at such high risk for spinal deformities.

The group first turned to the sharks’ captive diet for clues as to why the spine might be so fragile. Their diets appeared to be lacking in vitamin C and zinc, both of which are vital for proper skeletal health because they act as helper molecules in proper cartilage formation. Without adequate levels of vitamin C and zinc, bones become brittle and vulnerable to traumatic injury.

In humans, for example, vitamin C and zinc imbalances lead to diseases like rickets and scurvy, which often leave the load-bearing knee joints of patients buckling beneath them.

Vitamin C and zinc matter to the body’s healing processes after injury as well. When a shark’s cartilage spine is broken, a rush of calcium is sent to the fracture site. It builds there, and nutrients like vitamin C and zinc help to remove the excess mineral and return the bone to its normal state. Without those nutrients, the calcium is allowed to accumulate into an enormous callous that appears as a large hump in the animal’s back.

Huber believes that many damaging fractures are set into motion early on, at developmentally vulnerable times, during net capture. Here, the shark’s body contorts beneath the weight of hundreds of other fish as it is hauled out of the water and dropped onto the deck of a ship. Because the shark is often young at the time of its capture, it is more susceptible to skeletal injury.

Of course, any fracture is bad news for a shark because the animal must stay in constant motion in order to pass water over its gills and, ultimately, to breathe. Even with a back-breaking injury, a shark has no choice but to remain swimming.

To deal with their need for perpetual motion, sharks have developed their own kind of cruise control mechanism; they power upwards for a stretch before allowing themselves to glide back down without much effort.

But this maneuver requires space, and space is precisely what the average aquarium does not have. Huber estimates that, in the wild, a shark spends nearly equal amounts of time powering up as it does drifting down again. In captivity, that ratio is skewed entirely in favor of active ascent. Practically, this means a lot more stress for the spine in captive conditions.

If we consider the typical layout of an aquarium, we encounter even more problems. Most aquariums are circular. A stressed shark, as a large animal constrained within a limited space, will swim along the tank’s edges just as a nervous man will pace the edges of a room. This constant movement in a singular direction has an inherent sidedness –that is, it involves an asymmetrical use of the muscles as the body remains curved to one side. 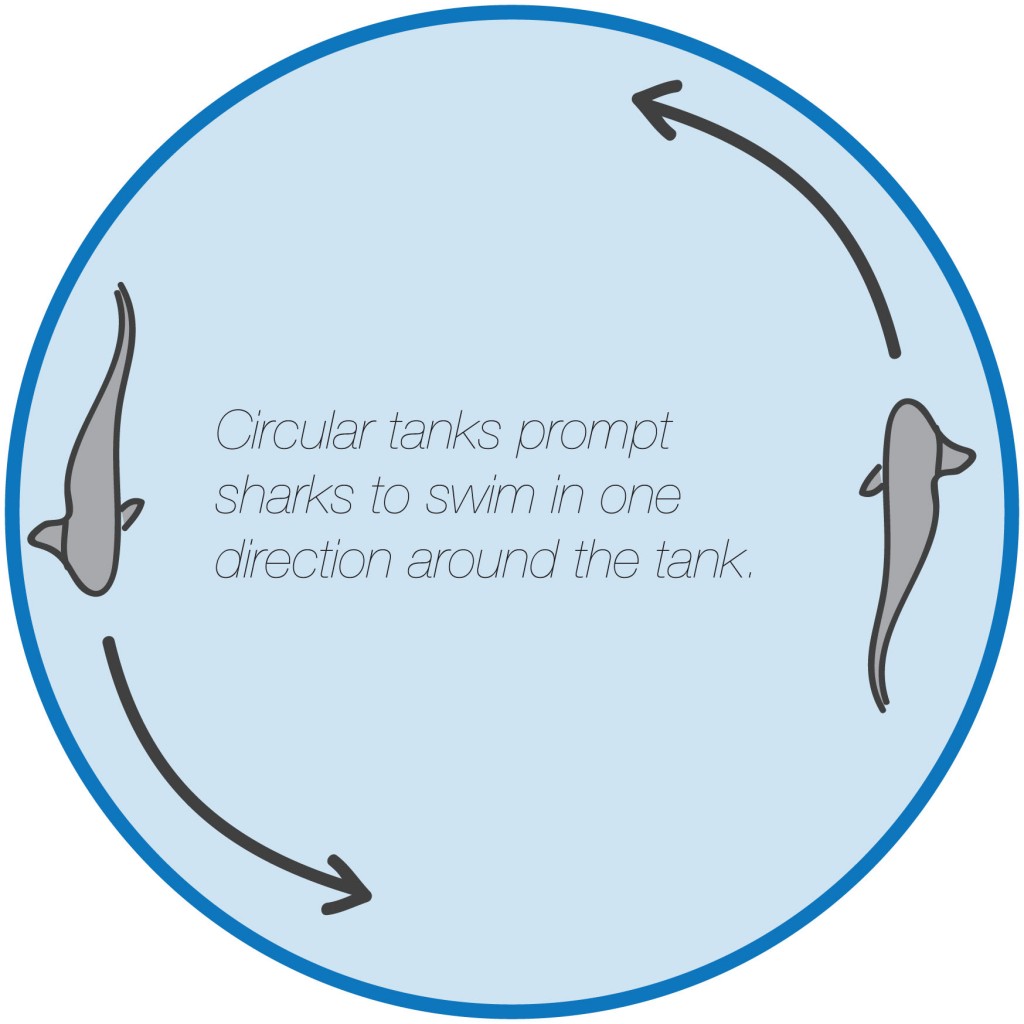 Unbalanced movement can have serious physiological consequences. The side that performs the bulk of the work declines under the stress of constant movement.This is why, for instance, many gyms advise conditioning runners to alternate between clockwise and counter-clockwise laps around the track.
A sandtiger shark that swims loops around a tank weakens its spine over time. Combined with poor diet and poor behavioral enrichment programs that encourage the equivalent of a couch potato shark, this asymmetrical movement leads to severe spinal deformities in captivity.

Huber and his colleagues suggest not only that sandtiger shark tanks be large enough to accommodate the animals’ hefty size, but also that they be built into figure eight shapes to allow for balanced movement. They suggest behavioral enrichment programs for exercise and regular dietary supplements for proper nutrition. Finally, they advise that new sharks be caught at older ages and via hook and line capture only to prevent fractures at developmentally crucial time points in the sharks’ lives.

The data and subsequent explanation of the shark spine project marks the most comprehensive, thoroughly tested explanation for spinal deformation in captive sandtigers to date. However, large aquaria are rare, and current aquaria are unlikely to alter their exhibits because of the financial constraints of doing so.

Captivity is meant to be both an educational and a conservational effort to save species like sandtiger sharks, whose low birthrates in the wild have lead to dwindling populations.

But captivity no longer seems to be the catch-all, innocuous solution that it once was. Sandtiger sharks are consistently listed in pieces of literature as excellent candidates for captivity when, as Huber’s data suggest, they are not. In attempting to conserve these creatures, we may very well be serving them poorly.