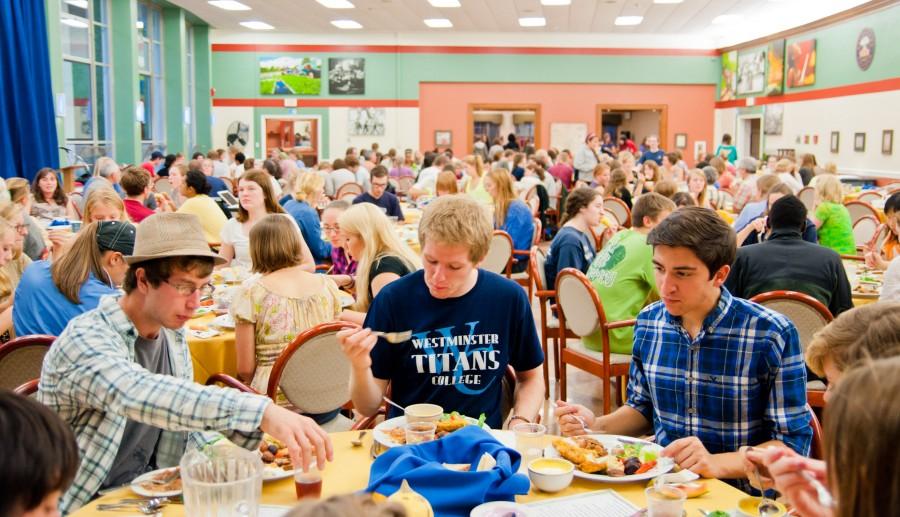 Last Wednesday, the third annual DeHart Local Foods Dinner, occurred in Schultz Banquet Hall, breaking the 2-year tradition of taking place in Brooks.
The event, established in 2010 to honor former Allegheny Professor Jennifer DeHart, was begun in order to celebrate both DeHart’s memory and her passion for local foods.
The event is divided into a market on Brooks walk, where local vendors ply their wares and at the dinner inside Schultz, dishes are served comprised of local ingredients.
This year, the original format of the DeHart Dinner underwent a major overhaul. The dinner, formerly held in Brooks was relocated to Schultz, allowing the presentation of a completely local meal.
Kelly Williams, ’14, a member of the Dinner’s Planning Committee, first fell in love with dining concept as a freshman. Her initial enthusiasm led her to join the Committee and become actively involved with the creation of the Allegheny legacy.
Williams and the planning committee felt that the local food was buried in Brooks, due to the overwhelming amount of food that wasn’t part of the local foods dinner itself.
“We made the decision to switch it to Schultz and do an entirely local meal, instead of just having some local food in Brooks,” said Williams.
Another member of the planning committee, Sara Schombert ’13, found the dinner’s new location to be an important factor in emphasizing DeHart’s commitment to local foods.
Shombert joined the committee after spending the summer working with Professor Kate Darby, also a member of the committee, to advocate local foods in the Meadville community.
“People were coming to Brooks and then finding out it was the local foods dinner,” said Schombert. “We felt that it’s important to celebrate local foods and make people know what they’re eating and celebrating.”
In Schultz, the local foods were the bedrock of the dining experience. In an email, Sustainability Coordinator Kelly Boulton stated that the majority of the meal’s food was sourced within 40 miles.
“The vast majority of the veggies came from very local farmers (within 40 miles),” wrote Boulton. “However, we did also source some things like butter, cream and yogurt from a bit farther afield (more like 150 miles). A small amount of ingredients like olive oil, tahini, lemon juice, and sugar were not local at all, but I would say made up a tiny percentage of the total ingredients.”
The change in location may have allowed for a more local meal.
But it also cut down on the number of diners that could participate, which according to Williams, was a loss the committee was willing to take in order to ensure emphasis on local foods wasn’t displaced by traditional dishes. The size restrictions of Schultz prompted the committee to sell tickets in order to limit seating. The event was sold-out, with 250 tickets purchased. During the dinner itself, students continued to come to the door attempting to join the meal, but were turned away.
The apparent popularity prompted Schombert to say expansion could be possible for next year’s dinner.
Following the departure of former Parkhurst employee Scott Steiner, a major contributor to the event, his loss, the committee had to scramble to get the dinner off the ground .
“[Steiner] was our point person for planning so not a lot got done over the summer. So we got back late August, early September and planned most of this event in a month, which was a little intense.”
The planning committee was forced to take on new roles with Steiner gone, and the committee flexibly adapted to the new structure.
“It became a much more equal distribution of responsibility among people on the committee,” said Williams. “We had to mobilize so fast to do such a big job and no one was expecting to be in charge of it, so we had to spread it out.”
Colin Soleim, ’14, who attended the dinner, felt the centralized focus and location make the event seem unattainable for the everyday.
“When you have it Schultz it sends the message that we can’t do this everyday,” said Soleim. “It seems a lot fancier in Schultz.”.