Gators fall to Chicago on the road 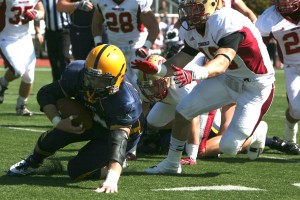 CAITIE MCMEKIN/THE CAMPUS Taylor O’Brien, ’13, scrambles to recover a fumble during Allegheny’s win against Oberlin at Robertson Field on September 29, 2012.

In their first ever matchup with the University of Chicago, Allegheny was shutout 10-0 on the road.

The Gator defense held to Chicago to only ten points, while the offense failed to score.

“It’s a good case of we beat ourselves,” said quarterback Mike Person, ’13. “Our defense played a great game but our offense just couldn’t get first downs or move the ball.”
Coach Matlak credited his defense for a solid performance thus far this season, but feels that there is room for improvement on the offensive end.
“We were very pleased with our defensive performance,” said Matlak. “Offensively, it was a struggle. It’s a huge struggle right now. We have a lot of work to do on that end, and we just have to keep working at it.”
In their homecoming matchup gainst Oberlin, the Gators answered an early Yeomen field goal with a two-yard touchdown run by sophomore Ben Perko.
The Gators dominated in the fourth quarter, forcing three consecutive three-and-outs.
The offense followed up the strong defensive effort with a 68-yard drive capped off by a two-yard touchdown run from Tim Werley, ’13. Sophomore kicker Ryan Mong’s extra point attempt was blocked, leaving the Gators ahead 13-3.
The Gator defense would close out the game with a safety by John Douglas, ’13, resulting in a final score of a 15-3. Douglas’ safety was part of a Gator defensive effort that has held its opponents to a total of 13 points in their last two games against Chicago and Oberlin. Rudy DeStefano, ’13, had a career day against Oberlin with 14 tackles, and was named to Division III Football’s Team of the Week.
“Our defense is a strong unit that plays hard every week,” said senior linebacker Bill Devlin. “As a unit we realize if we run to the ball we better our chances of winning. It’s real simple.”
On the offensive side of the ball, the Gators have had several injuries to key players in last few weeks. Taylor O’Brien, ’13, is done for the season. Perko sustained an injury to his ACL late in the game against Oberlin, ending his season. Tyler Smith is also injured, putting the Gators to their fourth running back on the depth chart.
“You don’t worry about those kinds of things,” said Matlak. “They don’t cancel games when a guy gets a boo-boo. You have to play with what you have and that’s what we’re going to do.”
Despite the loss at the Chicago, the Gators remain undefeated in conference play, which gives them a good chance to compete for a conference championship.
“When you get those two early wins it sets you up really early to win the conference championship,” Matlak said. “You’ve got to feel good about that.”
In addition to their undefeated conference record, the Gators’ last conference victory against the Yeomen proved to be a morale boost for the squad.
“The homecoming win felt good to get especially since there was so many alumni there,” Devlin said. “It was a good win for Allegheny Football as a whole not just Allegheny Football 2012.”
Matlak echoed the sentiment.
“It’s always important to win on homecoming,” Matlak said. “People come back, alumni come back, former teammates come back. It got us turned around from our Carnegie Mellon loss I think. You get positive vibes anytime you win on homecoming and you win at home.”
This Saturday, Allegheny will play another conference matchup against DePauw. Kickoff is at 1 pm.