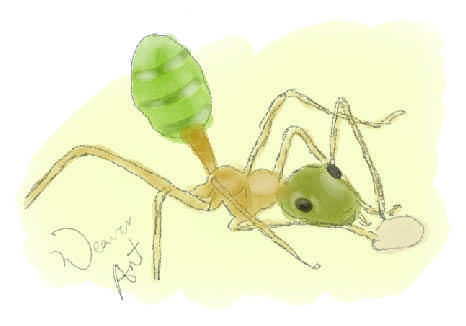 This week, as I sat down to watch a stir of people move across campus, my eyes caught another flurry of activity on the ground. It was a long train of ants, marching in a jumbled line around my feet.

At any given moment, Earth holds around 6.6 billion people–living, working, collaborating. It also holds somewhere between 1 and 10 quadrillion ants shuffling quietly underfoot, a microcosmic model of the larger world milling above.

It’s almost inconsequential whether or not we stop to notice that small-scale, parallel world; even by the conservative estimate, ants outnumber us by a million to one and nearly match us in combined weight.

A single colony alone can be home to many thousands of ants. For those who study the social insects, the sheer scope of the task is one of the first roadblocks to research.

It takes creativity to keep track of every member of the colony’s elaborate caste system, and modern attempts have ranged from amateur and low-tech to sophisticated and technologically ambitious.

One of my favorite attempts is that of physicist Richard Feynman, whose curiosity led him to pick up a colored pencil and track a group of ants living around his bathtub.

Sprawled out on the floor behind them, he traced their tiny footsteps around the room. Eventually, he noticed that their paths straightened out as they learned their way across the space–in particular, the easiest routes to food and back.

In contrast, Dr. Anna Dornhaus of the University of Arizona uses model airplane paint to keep track of each ant that she studies. She anesthetizes them, marks their backs with dots of color, videotapes them, and follows their movements over hours and hours of film.

Most recently, scientists in Derbyshire, UK have attached tiny radio tags to a population of wood ants in hopes of studying their movements across the English countryside.

The enormous effort of studying ants may lead some to ask why it’s all worth it. The answer depends on what field you’re in, but there seems to be something for everybody.

For instance, ants’ ability to learn the most efficient paths between locations, as Feynman saw in his home, has been used to create mathematical and computer science models tackling the so-called ‘travelling salesman problem,’ which aims at finding the shortest distance for a businessman moving between cities (or, more generally, between many points on a plane).

For biologists, the complex caste arrangement of ant colonies poses one of the most interesting social systems in the field. Colony members divide labor and specialize, all while forming a kind of superorganism that works together.

Fire ants, for example, lock jaws and interlace their bodies to form a living, breathing raft during floods; they tighten into a ball and drop as a unit into the water, spreading out and sometimes staying afloat for months.

Weaver ants stitch together leaves using the spun fibers of larval members, while honey ants engorge their abdomens with over-sized, glistening beads of liquid in case a food shortage in the desert threatens to starve their colony.

Ant colonies function as complex superorganisms–they’re uniquely known for it–but individuals also act in different ways within the hierarchy of their caste.

Dornhaus’s painstaking study of hand-painted ants, for instance, revealed that some ants laze about while a few responsible ants perform the bulk of the work. This is especially surprising to those who think of all ants as tireless workers, with each member pulling its own weight.

Ants vary wildly with location, too. Scientists are working to catalogue the world’s ant species in extreme detail in a collective project called AntWeb. If you’re brave enough to check it out, you’ll find a dazzling array of forms displayed in full focus down to the individual hair.

For those unfamiliar with the intricacies of an ant’s face (most of us), AntWeb serves as reminder of the incredible, beautiful detail that exists just outside of our immediate perception of the natural world.

As I looked down again at the ants crossing the ground in front of me, I thought more about the detail and vibrancy of life that can be lost not only to the limits of our observation, but also to the business of classes, work, and daily life.

We are outnumbered by something–a million times over–and sometimes, it feels nice to know it.