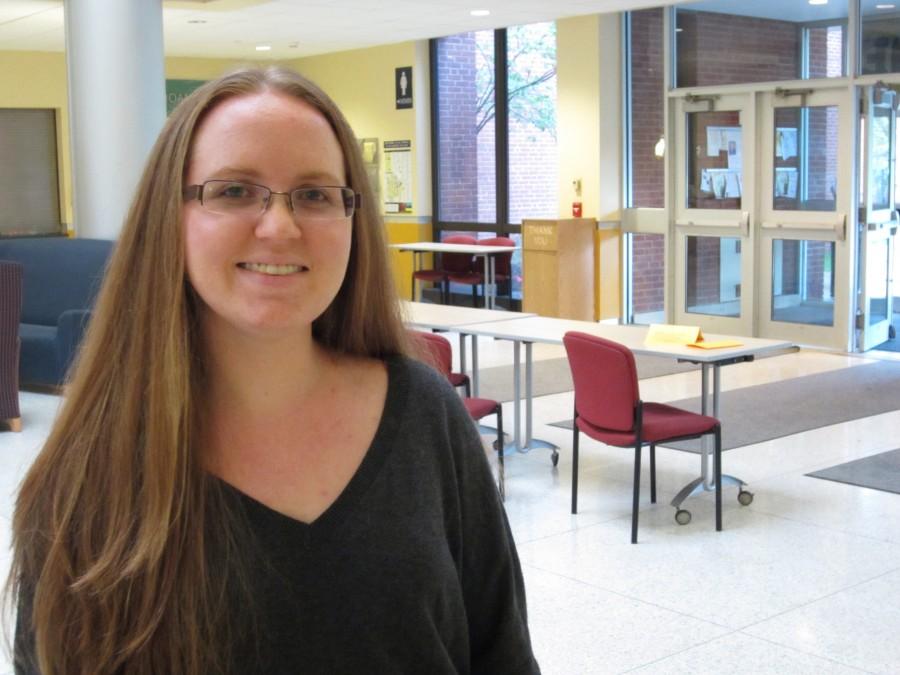 It’s that knee-jerk reaction you have when meeting an Allegheny student from a stereotypically beautiful state: Why are you here? How did you end up in Meadville?

Angela Cluchey – What attracted her to Allegheny: “I actually found it in the [40] Colleges that Change Lives book. My brother went to Austin College, which is in that book, and then I went to Emory and Henry College as one of my colleges, and then I looked again at that book because Emory and Henry was such a great college, [but] they just didn’t have dance, and I decided to come here. And I love cold weather. Me, warmth and sunshine do not get along. What really drew my attention was the unique combination of interests. So I wanted to study dance, and then I also wanted to study mathematics. I wanted something that would allow me to kind of develop those parts of myself without making me choose one or the other, and a lot of colleges want you to have a minor that’s related to your major. I was terrified of moving here. I didn’t know what I was getting myself into… I’ve seen Meadville a little bit…That’s what I was looking for. I didn’t want to go to a big city. I’ve done that before.” Nick Christensen – What attracted him to Allegheny: “I knew I wanted to go to a small school, so that was never in question for me…But also through writing my college essays, I think I discovered that [be]cause I would write about my experience growing up, and I saw how a tight knit community can play into healthy development, so that’s why I didn’t choose Berkeley. I knew I didn’t want to go to school in Los Angeles or in the Los Angeles area. That wasn’t something I was interested in. I don’t feel as close to Los Angeles as I do to Meadville, and probably because I think Meadville is a lot more open…People are open to being talked to. There’s a lot of different things that [are] very easy to get involved in. Everything is here. You don’t have to drive an hour away to go do something which you do in LA… And there’s so much opportunities to be a leader. I mean if there isn’t something that you want to do, you can create that, and there’s people probably who share those same interests with you. I like Meadville…I love Meadville. I spent my first summer here, and that’s really what made me love it.” Nick Rios – What attracted him to Allegheny: “Out of high school I played football for four years, so I was looking to continue that and play football in college. When I was looking at colleges, I wanted a small town college. I wanted to be on the East coast [and] to experience the four seasons. San Diego gets kind of dull. I mean, it’s bright, but when you’re getting the same thing constantly you just need a change-up sometimes. A lot of people’s biggest complaint is that Allegheny is in its own little bubble from the town, but the way I grew up—my dad’s from Indiana, and I grew up big on Notre Dame football, and Notre Dame football has a lot of tradition and everybody closes down to go to the games and stuff like that. That’s kind of what I thought this college was. It’s not that big on football, but it’s still like a tight knit community. It’s definitely that we’re in our own little bubble. I like that. There’s not too much distraction. I got accepted to a few schools up in Los Angeles, San Jose, Washington, Oregon and stuff like that, but to me, if I would have went there, there would have been so much more going on that school would have probably slid through the cracks at some point.” Rose So – What attracted her to Allegheny: “Quite honestly, I knew nothing about Allegheny or Meadville before move-in day, other than the fact that it’s a really small town. I came here on a whim but I’ve definitely enjoyed it.” Marissa Miranda – What attracted her to Allegheny: “I had grown up in Orange County all my life. I wanted to know what the culture was like in a different area of the country. My first impression of Allegheny College was that it was aesthetically appealing and after having my interview with admissions, I realized this college was also academically challenging. Because the college seemed to offer those characteristics, the weather didn’t impact me so greatly. After living in a climate where it was sunny three-fourths of the year, it was refreshing to experience the four seasons here.”