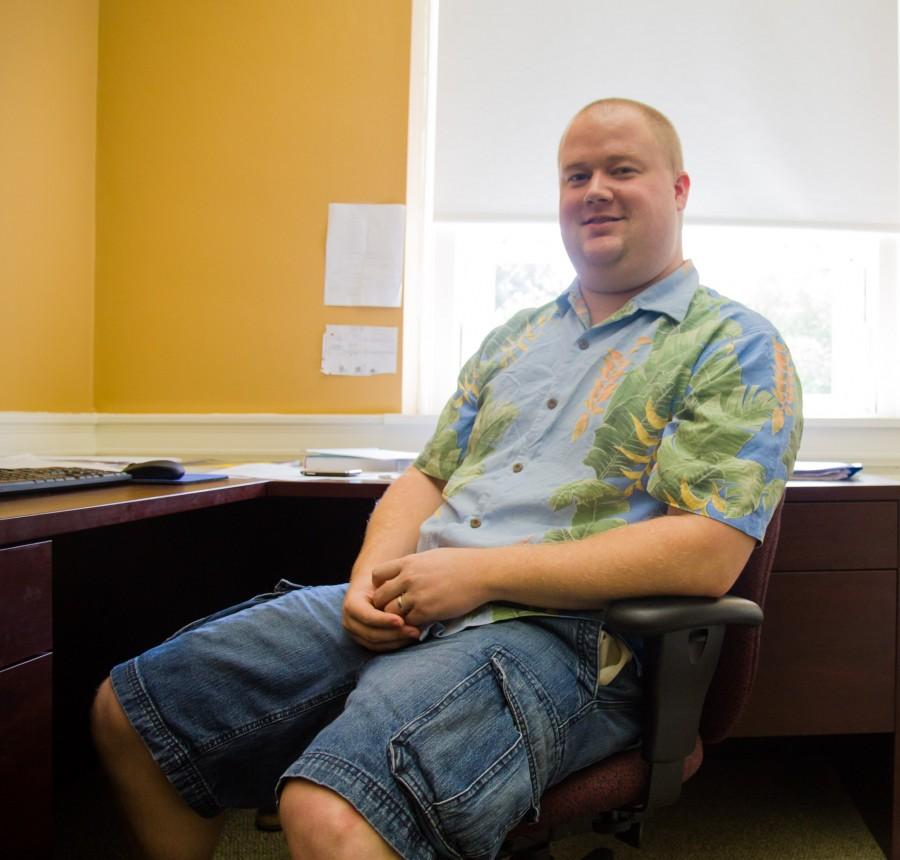 Mathematics professor Charles Dodge sits in his office. Dodge is one of numerous new faculty for the 2012-2013 school year. CODY MILLER/THE CAMPUS

Dodge reflected on his job transition and the difference between the colleges.

“Coming from a large school, there is just a world of difference in the way that the students and faculty are treated. I have never felt so invited and supported with administration. The students are here to learn — they’re not here to half-ass it. My office hours have have been filled with kids who want to get better and get it right.”

“And the Allegheny honor code is most unique thing,” he added. “I come from a school where that would have never have been possible. It is awesome that the students fought for it and earned it. It makes it easier on us professors.”

Dodge also found the expectations of the honor code demanding.

“It’s a little overwhelming of what is expected of you as a professor,” he said. “And there is exponentially more oversight of your work, but effort is recognized and there are more resources, facilities and support.”

With all of these extra resources, Dodge works to utilize them to make mathematics enjoyable for all students, no matter their scholarly inclinations.

“The way I find math interesting is to see it as a puzzle. I like to play with Rubik’s cubes, set up realistic thought problems, less realistic paradoxes and I have even gone as far as to show episodes of Futurama in my classroom,” said Dodge. “I have gone through proofs that don’t make sense- I have proved that pi equals 4. These are all things that students seem to enjoy.”

Outside the classroom, Dodge refines another talent.

“I like to brew beer,” he said. “I know that there are some other brewers, and it was a way to connect with other faculty members. I have met English and Physics professors based on the commonality of beer brewing.”

Dodge admitted his favorite music is confined to alternative rock.

“I like the Foo Fighters, Weezer, Incubus, the Killers and the Pixies,” he said.