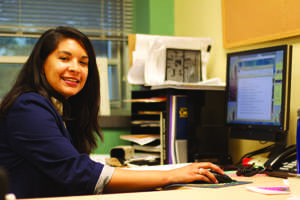 Editor’s note: valerie guerrero spells her name entirely in lowercase, and we have preserved this spelling. This article is edited from a much longer interview.

Assistant Director of the Center for Intercultural Advancement and Student Success valerie guerrero came to Meadville to fill a void.

Allegheny finished last semester with widespread vacancies in diversity-focused positions. Tahirah Jordan and Steven Canals, director and associate director of CIASS respectively, left their positions, and Chief Diversity Officer Dr. Lawrence Potter accepted a position as vice provost at Ohio University. Potter’s position is unfilled and likely to remain so for the rest of the year.

That leaves guerrero and Chaplain Jane Ellen Nickell as the sole employees focusing on issues of diversity and equity.

guerrero holds a Bachelor’s of Arts degree in psychology from the University of California Santa Cruz and a Master’s degree in Student Affairs from Iowa State. She also brings a life of experience with education and tough conversations.

Q: What attracted you to social justice work?

g: I mean, I think probably the most fundamental level would just be kind of the openness that I learned from my mom, which was just to be interested in other people and the stories that they have to share and also to kind of do the best that I can for myself.

So ever since I have been working on college campuses, it’s always been about how can I help folks know and connect them to other people that will give them knowledge that they just didn’t know they don’t know.
So that’s kind of been my mindset I suppose, being a resource. I see myself as a connector. It’s nice to get paid for what you love. I like working with students. I’m not really afraid of tough conversations because I feel like I’ve always had really tough conversations even just explaining my own identities to people.

Q: Where are you originally from?

g: I was born in San Antonio, Texas. I’ve moved 29 times in my life. I think because of that I’m pretty adaptable, which is also why I figure “Yeah, let’s try something new” because at the very least I’ll always fall back on kind of my education, the skills that I’ve gained so far. So I feel like I’m not really going to grow unless I try some places new to me.

Q: You don’t mind picking up roots like that?

g: No, I guess not. Because my family, they’re all scattered also. My mom and my stepdad, they lived in southern California while I was in college and they waited until I graduated to move out of California. Then they moved to Texas and after that they moved to Florida. And my dad and his family, they live in Kentucky, so it’s not too far away, and then my stepmom had family in Nebraska, so that didn’t feel too far from Iowa. My dad lives in Michigan. So, yeah, they’re kind of spread out. At least I get a lot of places to visit.

Q: Your mom was a big influence on you?

g: Let’s see, my mom… she’s fantastic. She’s one of those people that when people meet her they immediately say like “Okay, Valerie, now I understand you. Now I get all of those weird things that you do.”

My parents got divorced when I was like five, and so I was raised by my mom but I was always sort of around family or extended family. She always had this mentality of like, “We’re a team. So if you need something you tell me, we’ll talk about it, and we’ll kind of pull together to use our resources and figure out any problem.”

So I think that’s kind of a tactic that I’ve taken with me everywhere I go. She helps me remember that I’ve come from some places that were pretty difficult to get out of, just a lot of struggle in general. She’s always sort of been there to help keep me focused.

Q: How do you see your office here?

g: Different from when this office was the Office of Diversity Affairs, I think a lot of times the students that would come in would be students who felt like they were underrepresented on campus or they were a numerical minority on campus. I really see this office as serving all students. So I feel like any one group of students cannot really thrive here unless you’re working with all students.

Diversity focuses on the idea that all individuals are made up of a lot of social characteristics and identity groups that make every individual diverse. So for me, I really see diversity at Allegheny embracing that and understanding that you kind of have to know where you stand on your own and what your own identities are before you can really understand where someone else might be coming from.

Q: Who else on campus talks about power and privilege?

g: I know that there are lot of folks on campus who have these same sort of things in mind and incorporate them into the way they work with students or the way they might structure a program or structure a class but I think in a direct way like this, kind of having trainings and conversations, I don’t know of anyone yet. I definitely know that like, in the Dean of Students office, like with Residence Life or with the ACCEL office, they’re all sort of theories that are underlying the work that they do.

But I’m kind of the person who is here to put that into direct motion. It’s not like we’re going to have all of the answers by the end of the year. But at the very least, I’ve seen everyone say “Great, we have fantastic goals? How do we want to make that happen?”

Q: How are the Office of Institutional Diversity, Equity and Access and CIASS structured?

g: So, essentially, the Office of IDEA was CIASS and all of the things that happen out of CIASS, which involves some advising for student groups and partnering for programs and then also academic advising and support. And then Jane Ellen, the chaplain, so anything related to Spiritual and Religious Life. So those two branches were the Office of IDEA. And the Office of IDEA is led by the chief diversity officer.

Since now that we don’t have someone in that position, Jane, Ellen and I have worked together to stay up to date on what the other person’s doing and kind of keep good communications that people can still see us as working together.

But essentially, when I think of IDEA, I think of it as components on campus that are really working together to address all parts of the student. To make sure that they’re successful. So for me, that’s based a lot around identities and making sure that spirituality isn’t left out of that.

Q: How does a community respond to acts of hate or ignorance?

g: I feel like, when folks feel really comfortable, or they feel like they’re in a space where their ideas are shared, then they feel more empowered to voice those, whether it’s going to be great for the community or harmful to the community. So for me, I really like to take the proactive approach. But also sort of understanding that, if we’re looking at this concept of diversity, that everyone embodies it, then I think it will create a community where people can sort of feel shared responsibility for what happens on the floor.

Q: Are there any experiences that stick out as especially formative?

g: I had this colleague, his name is Bill Heinrich and he’s now a Ph.D student at Michigan State. But he, he moved to Santa Cruz after finishing his Masters in the Midwest and he was sort of this really stereotypical outdoorsy athletic, everyone thought he was this outdoorsy hippie white dude. But that stigma, and then later his work style, really was seen by the students in our community as like, “Oh, that white guy who’s coming in here to help us.”

Because the community at Oakes was more than 50 percent students of color and first generation students. So for the first two years of his job, he had a lot of trouble connecting. Students saw him as sexist and racist and heterosexist and for him, it was just like “I’m trying really hard to get to know these students.” And he really felt like he was acting out of their best interests and trying to understand them.

It took about two years, and I also didn’t like him for the first maybe two, two and half years that I met him. And I think that over time, over years and years of conversation, and one day he just realized like “I have to do all of this differently.”

So through that relationship, one, I really got to understand what it was like for him as sort of a white Protestant male from the Midwest who was heterosexual to come into this environment and be a statistical minority in a lot of different ways. And to be in a totally new place where people just automatically thought he was a villain.

It was a lot of work and a lot of pinpointing specific things that might come up in a one-on-one conversation that he would do that sort of shut others down. He’s definitely the best ally I know. And, I mean, he got married, and even that relationship, like she’s a woman who identifies within the LGBT spectrum, she’s also very aware of power and privilege, so they kind of became this adorable couple that really understand their power and privilege and work to help others understand it. But yeah, he’s been sort of my go-to person.

The Center for Intercultural Advancement and Student Success is located on the third floor of the Campus Center. CIASS is open Monday and Wednesday from 8:30 a.m. 12 p.m., Tuesday, Thursday and Friday from 1 to 5 p.m., and by appointment.