The Boulder #5: The Leadership Model 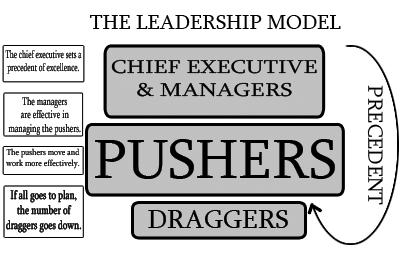 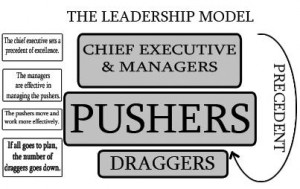 There is an inside joke in my chapter. It involves one member who never comes to meetings or other events.
When he does show up to events, we usually greet him with “oh you’re still a member?” He’s become the brunt of a lot of jokes.
There are a few members like this, absent from fraternal functions.
Yet even though they don’t give back to the fraternity, they are still members and, unfortunately, those that do care about pushing the boulder must cope with their negligence.
They are the draggers. They exist in any Greek organization. But it’s okay, because there are members in place to pick up their slack.
In any Greek organization, there are three types of members: managers (president and exec board), pushers (those that participate and show up to events), and then draggers.
I’ve created a leadership model to show how effectiveness in the organization can be enhanced.
It all starts with the president who must cooperate and work with the managers.
The exec board is an extension of the president and helps him to carry out the itinerary of the organization.
Now, although the executive board is the smallest faction of an organization, its members hold a substantial amount of power.
They are in charge for strategically placing pushers in appropriate spots on the boulder — making sure they show up for events, while also facilitating their work.
Though the managers participate in events, they are the ones running the show.
The pushers are (hopefully) the biggest contingent of an organization.
They are passionate about the organization as they are responsible for carrying out the itinerary handed down by the managers. They must adhere to guidelines, participate in events and cooperate with each other. They are the core of the organization.
Without the pushers, the boulder would not actually move; there would be no one to push it.
Then, of course, there are the draggers. They’re not irrelevant. They are onerous to the organization.
They hamper progress, latching onto pushers’ feet like heavy rocks. Unfortunately, they slow the movement of the boulder.
Now, looking at this model, we can also deduce how we can lessen the amount of draggers while enhancing the effectiveness of the pushers.
It all starts at the top with the upper echelon, which must set a precedent for excellence, which will hopefully trickle down through the rest of the organization.
They will transmit an established high precedent of achievement. Working top-down, managers will be more of a cohesive whole and able to effectively carry out the designated agenda.
Because of this, they can also facilitate the pushers effectively and appropriately, their work now becoming easier.
With cohesion from the president and exec board, the pushers run smoother.
And then if this teamwork and enthusiasm can be adequately transmitted from the managers to the pushers, this will pull draggers in from the bottom. Why does someone become a dragger in the first place? Sometimes it can be lack of time or interest.
But if they see that the organization is having fun, that they are a unit, that the pushers are effectively striving for success, then they will rise from the bottom.
But sometimes it may take a little more than just enthusiasm from the pushers; it may take a leader reaching out to the draggers.
But either way, they can come back. The faction of draggers can be reduced.
And once they disassociate from the draggers and become a pusher, not only is there one less dragger but there is also another pusher to further the progress of the boulder.
If the organization is running at maximum capacity, then there are no draggers.
It takes time, effort, and leadership, and it can be done. It all starts at the top with the president and managers and moves downwards.