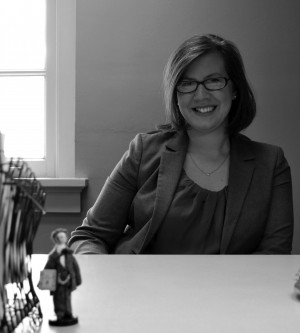 It’s mid-afternoon by the time Professor Amber Shaw finishes her last class on Wednesdays and takes up her post for office hours on the third floor of Oddfellows.

Last May, Shaw earned her graduate degree from the University of Georgia and by the beginning of August, she settled into Meadville to begin her one-year position as Visiting Assistant Professor of English.

Now, halfway through the first week of the semester, she’s taught three classes and met many new faces, some of which are as new to the community as she is.

Shaw was born in California but moved to Arkansas in elementary school after her father, who was in the aerospace industry, was transferred to work at a new plant. She completed her undergraduate degree at Rhodes College in Memphis, Tenn., a liberal arts institution of 1,800 students which is of a similar mold as Allegheny.

“The campus actually had a fence around it,” she said about the college’s size.

There, Shaw served as the editor of the Sou’wester, the school’s student newspaper, and faced a decision between continuing on in journalism or studying to be a teacher.

“I wasn’t sure if I wanted to teach or if I wanted to go into journalism or some other form of writing, but the more I thought about it, the more I could think of nothing better than to share what I love doing with other people,” she said. “I feel lucky to get to stand up in front of a classroom and talk about books all day.”

Shaw is teaching a course titled Working Women, a special topics course that takes advantage of her specialty in 19th century American literature, although she says she goes transAtlantic, and branches out to British literature.

“It’s both about women who worked in various ways in the textile mills or as artists or as writers, and also those who agitated for reform in abolition, in sufferance, in labor reform, and in marriage law reform,” she said.

She is also teaching two sections of English 200, Reading Literature, so many of her students are either first years or sophomores.

“It’s exciting to teach students who are also new to the community,” she said. “They’re very eager – and talkative. They’re excited to learn.”

Shaw said that she, too, is eager to learn about the Allegheny community, its traditions, and what makes the campus unique. She said the campus is much more alive now that students are back on campus, and she’s looking forward to the activities that began with the school year, such as yoga sessions.

Along with her dog, Archer, a little brown and white puppy whose picture sits in a five by seven frame on her office shelf, she plans on spending the last warm days of the year exploring the walking trails around Robertson Field.