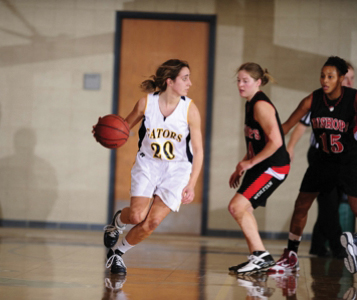 Jill Gregory, ’11, led the team and was fourth in the NCAC with 14.2 points per game last season. Photo courtesy of David Sinclair

“Our strength will be our quickness on defense and the ability to beat the opposing team down the floor in transition,” said point guard Britni Mohney, ’11.

Their swiftness as a team favors a more aggressive defensive mentality that the Gators want to bring to the court.

“We are playing a more up-tempo, pressure style of defense which we are hoping will take teams out of their offensive flow and result in turnovers,” said shooting guard Jill Gregory, ’11, a First Team All-NCAC pick from last year.

Gregory ranked fourth in the league in scoring with 14.2 points per game and is joined by veteran guards Mohney and Laura Magnelli, ’11, who have a combined 158 games of experience. This backcourt will be the foundation for a team that is less-experienced and undersized at the forward positions.

“We graduated some talented seniors from last season and I’d say we are a relatively young team this year,” Gregory said. “So we are going to have to continually keep working at playing together and meshing as a team if we are going to be successful.”

Though they are young, head coach Kate Costanzo believes that the younger forwards such as sophomores Ann Ryan and Heidi Goeller are prepared for their roles after solid freshman seasons.

“The sophomores had a lot of playing time as freshmen, more than your typical freshman might get,” she said.

In her freshman campaign, Goeller played in 23 games and started in 19. She shot a team-high .459 from the floor and finished third in scoring on the team with 7.9 points per game. Goeller acknowledged the difficulty often posed by being young up front, but expressed confidence in the team’s dedication.

“We’ll have to compensate with hard work to make up for the difference in experience,” said Goeller. “I don’t think it’ll be a problem.”

One of Goeller’s responsibilities will be helping the Gators improve their rebounding. The team ranked last in the conference in offensive rebounding, and their -6.3 rebounding margin ranked eighth of nine teams in the NCAC. Gregory said that the team has put emphasis on this aspect of their game since the first day of practice.

Though the team was ranked fifth in the conference preseason polls and has a lot to improve on from last year, Costanzo still believes the pieces are in place for the team to exceed outside expectations.

The first test for the Gators is Tuesday at Grove City, whom they defeated last year 61-49. With a goal to make it to the NCAC Finals constantly present within the minds of the Gators, the team has developed a mantra for the season.

“We have a saying this year and it’s ‘We’re goin’!’” said forward Ann Ryan. “Because we are going to the NCAC Finals.