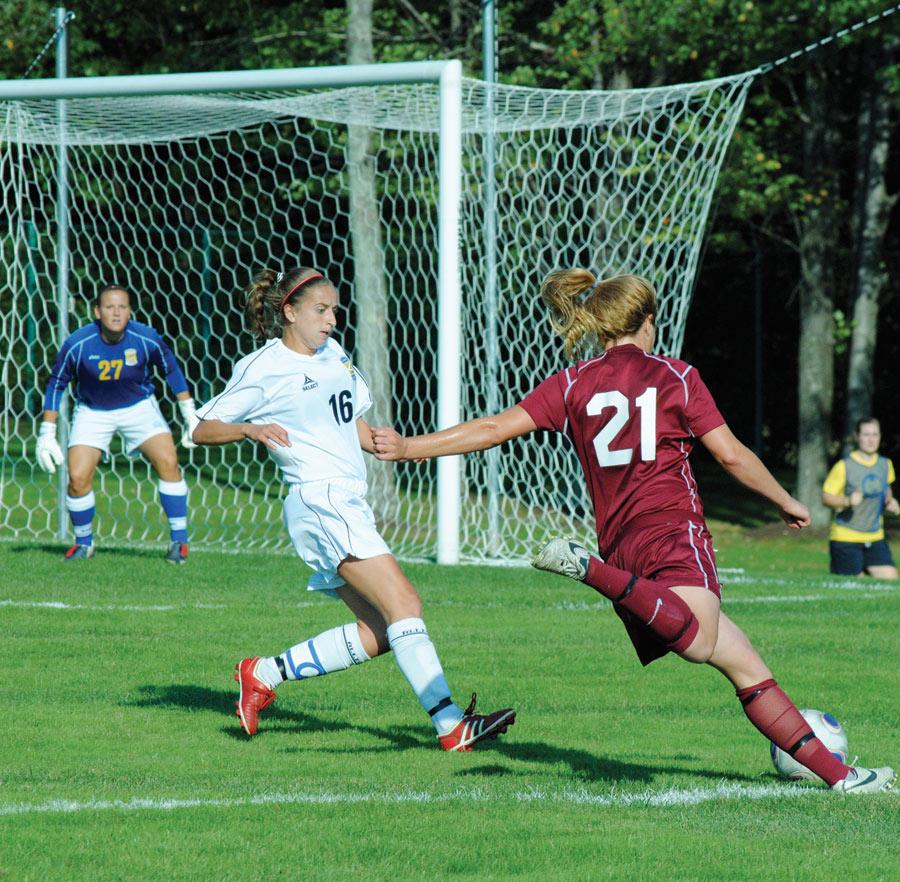 Midfielder Nicole Mascia, ’11, (16), has been a key factor offensively and defensively for the Gators this season while goalkeeper Emily Karr, ’12, (27) led the league in save percentage (.911) and shutouts (12). Photo by Charlie Magovern/The Campus

The Allegheny women’s soccer team sat in suspense with the fate of their season one “refresh page” click away. The video feed to the NCAA tournament selection show was down, so the team was forced to wait the length of a regulation match to find out if they would be the third squad in Allegheny history to qualify for the national tournament or if their historic run was over.

“We were in there so long that we were kind of getting on each others’ nerves,” said Georgia Frost, ’12. “When we found out we were really excited, but then everyone had to go to class, so we sort of fled.”

This is not surprising for the Gators (14-2-4), who haven’t dwelled on any of their wins, losses or ties all season. Part of this new mindset can be credited to the arrival of assistant coach Linda Schirmeister, whose background in psychology (her major in college) has given the team the mental game to go with their meticulous, disciplined style of play.

Instead of the usual cursing or feeling guilty, the team has a new method of dealing with the little miscues they make over the course of a match.

“We have this thing called a mistake ritual,” Frost said. “We just say ‘chin up’ instead of getting frustrated and apologizing to our teammates.”

The technique reinforces the positive of an event that could easily negatively linger in a player’s mind. Schirmeister has studied how athletes waste mental energy on negative thoughts, and finds that the mistake ritual helps to maintain team focus.

“By us saying ‘chin up’ its like a ‘forget that one, next one is better, that’s in the past’ kind of thing,” said Schirmeister. “So instead of having a negative reinforcement, we have a positive ‘we don’t care you did that, go for the next one’ kind of thing.”

Schirmeister also helps the team separate manageable internal factors like poor communication from uncontrollable external factors such as weather or the referees to keep the events of the match in perspective.

“It’s the idea of wasting energy on things that we don’t need to waste energy on,” she said, “and its often stuff that loses people games.”

The mind game doesn’t put the ball in the net, though, and this year’s Gator squad is a product three years in the making. Seniors Abby Silvester, Nicole Mascia, Julie Muller and Molly Waggoner are now in their third season of being regular starters, giving the team a solid core of experienced players from front to back. The team’s juniors also feature players who have been either starting or playing regularly since their freshman year, making this season’s success no accident.

“We got to that stage where everything clicked this year,” said Frost.

As one would expect, Allegheny isn’t the only team in the tournament field of 63 with seasoned players. Washington University (10-7-2) lost in the NCAA finals last season to Messiah College, making Friday’s match the most challenging one of the season for the Gators.

“WashU are a good side, from all accounts, but they are beatable,” Schirmeister said. “We tell our girls all the time, ‘play your game and you can win against any team.’”

Since the Gators have never faced WashU, Frost said the team will play to its strengths by possessing the ball and moving the ball wide.

Allegheny has only qualified for the NCAA tournament twice in the history of the program, and has yet to secure a victory, meaning that this season will be as history-making as they are able to make it.