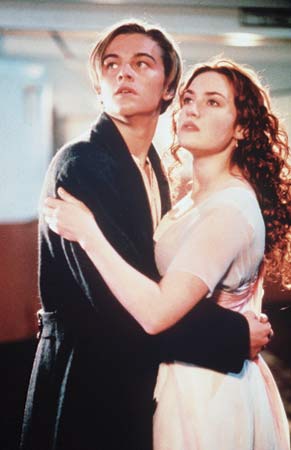 Leonardo DiCaprio and Kate Winslet star as the famous pair of ill-fated lovers in James Cameron's Titanic, originally released in 1997 and re-released in 3-D at the end of this month. http://200movies1woman.com

Titanic is a never-ending series of climaxes.

From Rose’s unforgettably steamy deflowering; to her miraculous rescue of Jack from his chains; to the horrific scene in which the ship finally points straight up to the sky at a 90 degree angle, it is very difficult to decide which moment in the movie is most exciting.

For me, the whole film was, in a word, flooring: as hard as it may be to believe, I’ve only seen Titanic once before, at my (male) best friend’s sleepover party, at the age of eight.

During the scene when Rose undresses, all the other boys at the party squealed and scrambled over to the screen to plant kisses on her face.

As the only girl present, I, oblivious to all reason, joined in. My friend’s dad came in a minute later and turned off the VCR, screaming at us all to knock it off.

I was left with a sheepish grin on my face and a vague feeling of curiosity in regards to what would happen next in the movie—a desire that, incredibly, was never fulfilled until now.

Titanic, though admittedly extremely overdramatic and unrealistic in plot, resonates of truth in the human feelings it conveys.

It’s impossible not to empathize with Rose’s struggle to choose between repressing her spirit back into the life she’s always known and jumping into the depths of the unexplored with Jack.

Certainly, the blunt distinction between the lives of these two characters is a bit exaggerated.

Not everyone can relate to the experience of being a vagabond living off the land that has a torrid affair with a tightly-wound (and engaged) aristocratic girl.

The Hell-like image of the bowels of the ship as Rose and Jack run through laughing mischievously is just a little too excessive of a metaphor for rebellion and the corruption of a virgin soul.

Clearly, this relationship is too fantastical to be considered truly relatable by most audiences.

But consider for a moment what it would be like to step into the big, bad world outside of your personal comfort zone, and you’ll understand how excruciating the decision-making process can be.

How do you decide what (or who) to value, to throw away, to run away from, when you don’t even know what other options lie in store for you?

At a certain point, you might question how much of your life has been owed to your personal decisions, and how much has been determined by factors outside your control.

And the answer you come up with might scare the shit out of you.

That’s what happens to Rose when she meets Jack and realizes that an entire world, free of lies, hypocrisy and social status, exists outside of the twisted shelter she’s always known.

After overcoming her initial paralysis of fear and uncertainty, she flourishes with happiness, desire and the love she never experienced with Cal, her abusive dipshit fiancé.

Unfortunately, the ecstasy these lovers unlock is doomed to be smothered (literally) by the bitter cold North Atlantic and 52,000 tons of ship.

Utter disaster brings out both the best and the worst of people in Titanic. Some people ensure everyone around them has life vests.

Some people ensure their own unworthy spots in the limited supply of life boats, through dirty bargains with sailors.

Still other people ensure they use the time to the best of their ability: they drink; they play music; they chain up young boys in the bottom of the ship and leave him to suffer a torturous death, of which he will be fully conscious.

Or at least that’s what some people think, until Rose saves the day in a marvelous scene of the upmost suspense, in which she axes Jack free from his handcuffs just moments before the water level reaches high enough for him to drown.

This is an impressive reversal of stereotypical gender roles, especially for the story’s time period.
It was moments like this one in Titanic that left me suddenly choked for breath.

Other moments had me screaming out unexpectedly (luckily, we were the only guests in the theatre that night); others, I’ll admit, made me cry.

Moments of particular suspense were heightened by the 3-D effect.

For example, when a passenger just barely swims through the only open door before it closes on his leg, I almost felt the whisk of the door on my own leg.

However, it’s difficult for me to judge just how much of a difference the 3-D effect has on the movie when I’ve only seen part of Titanic once before, as a very young child.

After awhile, I started to forget I was even wearing 3-D glasses.

Certainly, I felt as if I’d been transported into the world of the film, but a lot of that experience was simply due to the impressive special effects and breathtaking shots of the ship (inside and out).

One thing I will mention in support of the 3-D effect: it definitely intensified the underwater scenes in the beginning, when the treasure hunters explore within the sunken wreck of the RMS Titanic itself.
At moments, I felt as if I actually were that robot contraption the hunters control with their arms.

All in all, I was surprised by how deeply I was drawn into this tale of disaster and romance.

As the only girl child at an eight-year-old boy’s sleepover birthday party, there was no way I could have properly appreciated the embellished piece of art that is Titanic in the same manner I do now, as a typically conflicted and emotional 21-year-old female.