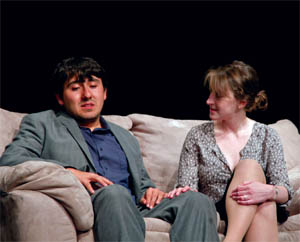 The Little Theater in Arter Hall welcomes all people to the premiere tonight of “We’re All Shitty People,” a play set in the 1990s and adapted from one written in the 17th century.

Senior Luke Wronski wrote the script for the production, and junior Andrew Copenhaver directed it.

“I feel very fortunate having it be the first thing I’ve really written and to get the opportunity to get to see it performed,” said Wronski, an English major planning on attending graduate school for creative writing and playwrighting.

He described the show as a comedy.

“Originally I wanted it to be a dark comedy,” he said. “That’s the highbrow humor, the kind I like.”

He claimed the play to be a very loose adaptation of “The Country Wife,” a restoration comedy originally written by William Wycherley in 1675.

Wronski said he got the idea to adapt the play about a year ago, when he was taking a screenwriting course in England.
The play, which he began to write this past September, was completed in about four months. Upon returning to school after winter break, Wronski started running it over with director Andrew Copenhaver.

“In this world that has yet to change, set in the ‘90s, the idea that this kind of behavior amongst men will no longer be tolerated. So you really have this controlling world, which is the plot of the play and the main characters decisions to try to take advantage of people,” he said.

The cast, which consists entirely of students, has been working on the play on and off since February, explained Courtney Rice, ’12, who plays a sexually frustrated housewife in the production.

She is one of the few cast members in the production who has been in performances previous to this one.

“She’s around her forties and mad at her husband, Mr. Danfield, because he ignores her for the business he runs,” Rice said in describing her character.

In the play, Rice’s husband conducts a business merger with the main character, Mr. Warner, played by Leo Leon, ‘13. Warner is a recently single middle-aged man trying to cover up his divorce so his sex life is not damaged.

Rice explained that the production was made possible in a large part due to the club Student Experimental Theatre.

“You can come to them with an idea for a play and they’ll help you put it on,” she said.

President of S.E.T. Shannon Reilly, ‘12, explained her role as a liaison to help facilitate any of the production needs for the performance. Reilly became president of the club this year after serving as production manager last year.

“We’re definitely growing with the new building, the Vukovich. Our numbers have been increasing more and more every year,” Reilly said. “Members are based off of people who are involved, people who are in the performances as well as those who regularly watch them.”

Throughout the production she stayed primarily behind the scenes to make sure everything was ready for the cast before it started rehearsing.

Some upcoming events for S.E.T. include the student-devised project (to be named soon) which is premiering April 27 and 28.
The project was directed by sophomores Blair Hartman and Katie Beck.

The group will also be premiering its second annual Cabaret Night, a compilation of songs from a number of different musicals, on May 1 and 2.

This year the production is headed by juniors Caitlyn Fuoco and Colleen McCaughey.

“Cabaret Night allows the club to provide musical theatre and exploration of the arts on a campus that doesn’t provide many opportunities,” Reilly said.

Reilly first became intrigued by theatre as a freshman when she staged a senior project. She said she is excited to see this production after working on it.

“There’s definitely moments in the play when our generation will be watching and go, ‘oh, I remember those things,’” she said. “The show definitely has a lot of mature content, but it’s a good show for a college crowd, so just go see it with an open mind.”