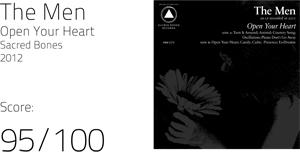 Once in awhile a record hits you at a time almost fatefully opportune, as if it were tailor-made to define a particular moment in your life or perhaps even guide you toward a new dawn. This week’s The Men’s Open Heart is one of those records.

A few comparably special record-listening experiences I’ve had come to mind. One is listening to Oval’s 94Diskont and subsequently making a rash purchase of a mini-keyboard in an attempt to make music, because in that moment, electronic music was “it.”

Another: coming across Darkthrone’s black metal masterpiece, A Blaze in the Northern Sky, while questioning the underpinnings of my faith.

Still another: locking myself in my bedroom shortly after breaking up with my girlfriend of four years and mulling over my sorrows to Game Theory’s Lolita Nation.

Then, three days later, stumbling upon X’s Wild Gift, and realizing after six consecutive listens that I didn’t need any of that shit anyway.

Some of the most formative and unforgettable moments of my life have been crystallized and re-defined by a chance encounter with an extraordinarily pertinent body of music.

I say this not so much to provide a glimpse into my personal life, but rather as a means to illustrate the potency of music.

I’ve reached the conclusion that nothing but music is so cogently provocative, jarring, unnerving and altogether powerful.

The Men are a relatively unknown Brooklyn-based post-punk outfit, led by guitarists and vocalists Nick Chiericozzi and Mark Perro.

Last year, the band created a minor ripple in the indie community with the apparently visceral release Leave Home. I say “apparently” because I have not actually gotten a chance to listen their proper debut (we’ll get to that later).

Open Your Heart begins with the flooring combination of “Turn it Around” and “Animal.”

The former is the clangorous tuneful fury of a power-pop melody, juxtaposed against a low-fi flurry of fuzzed out power chords plays by a piercing lead guitar.

Whatever bit of sheen in “Turn It Around” is abandoned in “Animal,” an all-out tirade of half-drunken, barroom brawling punk rock. It is immediately evident that Chiericozzi and Perro have listened to their fair share of Buzzcocks and the Replacements, and that they’ve have been influenced by the power-pop genius of the former and the wrecked, feisty energy of the latter.

It’s not so much that the Men are a carbon copy of their influences. Nor are they a cringe-worthy attempt at retro trendiness.

They push themselves further by hearkening back to the past.

Fundamentally, Open Your Heart is a record that remembers but never ossifies. This is a band of sonic touchstones and foundations, but it is never entrenched within these influences.

Leading out of “Turn It Around” and “Animal” is “Country Song,” a piece which feels more like a ganja-tinged jam session of tremolo-sweltering guitar and crooning pedal steel than actual alternative country.

It’s an informal, rudimentary and at times trudging attempt at genre-bending, but it works. “Country Song” adds a layer of candidness and humanness to the album that might have otherwise been lost by misguided grandeur.

Oscillating out the shambles of this track is, well, “Oscillation.”

This is a piece of shimmering psychedelia which feels yet even more open and candid than its predecessor.

The piece is an immersion of spiraling, melodic guitars which feels accidentally extraordinary. The energetic guitar interplays flow as if from a group of teenagers playing Television and Sonic Youth inspired-basement rock.

From here on out, the album is comprised of pure alt-country (“Candy”), quasi-bluesy bar room jams (“Presence”) and some of the best pop I’ve heard in ages (“Open Your Heart,” the album’s best track).
The album is wonderfully multifaceted, but in none of its forays does it attempt to recast the band into something it is not.

In crooning the alt-country ballad “Candy,” the band never sounds like a Gram Parsons cover band. The tracks carry more of a free-formed, ‘oh-this-is-cool-let’s-put-it-on-the-record’ looseness.

This music never comes off as overthought. Whether or not the Men consciously aimed to form their unadorned compositions into a musical “fuck you” to the chillwave, dubstep and electro pop of late, they do a damn fine job of doing just that.

The record’s supposed flaws are really its greatest triumphs, from the obvious and constant nods to punk predecessors; the interspersed cheap attempts at guitar epics; the makeshift, amateur production; the threadbare feeling that everything is just about to fall apart; and the painfully generic song titles.

This is some of the most liberating music I have heard in quite a long time, and quite frankly, I desperately needed that kind of music at this moment.

Within the context of the fads and ‘contrived’ retro-ness which seems to plague much ‘indie’ rock of late, I cannot tell you how refreshing it is to hear real, human music.

The Men are doing something spectacular in pushing past the boundaries of ‘retro,’ ‘kitschy,’ and ‘ironic’ to touch upon the past, but never for the sake of trends. As a result, this group of relatively unknown garage rockers are silently creating some of the most innovative, resounding and fleshed-out music of recent memory.

The only slight issue, however, is that I have little idea as to who the Men really are. I came across this record at 3:20 a.m. on Thursday morning, while randomly surfing Metacritic.com, when I happened to see that this album had one of the highest cumulative critical ratings of the year. Maybe there is a certain irony to it, but so what?

Initially, I was going to try to contrive some bullshit connection between Perfume Genius’ rise to indie, Pitchfork-darling prominence. But, that’s the thing – the connection was frail.

However, after the opening chords of “Turn It Around,” I decided to give a proverbial ‘fuck it’ of my own to even attempting such an endeavor, but in that very decision is the beauty of the record.

Open Your Heart is a sonic statement that it’s okay to not live a life of perpetual people-pleasing, to be unsatisfying, fallible and it’s okay to be human.

Ambition is great when properly actualized, but it can also be stifling. It’s easy to get lost in a vapid pursuit of merit so much so that you forget who you really are.

Ostensibly, this album has seemingly no correlation to this issue’s motif of money.

My one-thousand plus words of tangential, laudatory praise and vague philosophizing mention nothing about money.

But then again, maybe the absence of money is what makes this record such a masterpiece.
It’s about what you can achieve when you transcend past the idea that money, merits and titles are personifying characteristics.

From the blissfully off-key, alt-country sound of “Candy” to the noisy, tangential Sonic Youth imitation of the closer “Ex Dreams,” a common thread rings on this album, even if it’s not prevalent through its barely perceptible lyrics.

I can sometimes be incredibly harsh in assessing music. When I give a lukewarm response to the oft-asked ‘what-do-you-think-of-x-band’ question, I probably come off looking more like a snob than anything else, and maybe only a few albums each year break the score of 90% for me.

So, when two albums consecutively break this point, it’s exciting, to say the least. Thus, part of me was tempted to call this album the new ‘best of the year.’

Then again, it might not mean to you what it dose to me.

The word ‘favorite’ does not necessarily signify ‘best.’ I could simply be sliding into unalloyed band worship.

But what I can say for certain, is that after three consecutive listens this is one of those indelibly special records that fatefully hit me at just the right moment.

I needed that jarring, liberating wake up. Maybe you do, too.