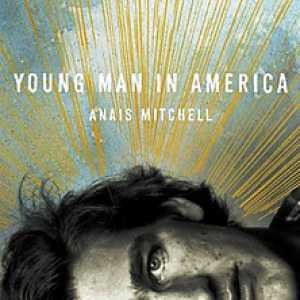 Earlier this year, I called P.J Harvey “rock’s most consistently brilliant songwriter,” but I can’t help to think that with Young Main in America, Anais Mitchell might just be on the fringes of claiming this distinction.

Mitchell’s previous release, Hadestown, was something akin to a ‘folk opera’ – a concept album framed around the Greek myth of Orpheus and Eurydice. Ambitious, grandiose, and poignant, it was a musical tour de force that, in a just world, would have catapulted Mitchell to stardom.

In the opener “Wilderland,” Mitchell immediately immerses the listener in a disparate atmosphere of wrenching, trudging guitar, dissonant, screeching violins, and simplistic yet powerful thudding percussion. The piece is a testament to Mitchell’s songwriting prowess – she uses the lush instrumental interplay not to mask any sort of inadequacy within her music. Instead, each gritty note rings with purpose. All of this held is together by Mitchell’s gorgeously morose vibrato, which sounds like a slightly graceful, tuneful nod to Joanna Newsom.

The title track builds upon this launching point as Mitchell leads the listener through the despondency and disillusionment of rural America. It rings with organic, affecting texture akin to Talk Talk’s Laughing Stock.

Mitchell’s greatest strength is her childlike wistfulness. With this, She guides the listener through a supple, fluid course of brilliant tracks that conveys at rustic landscape of timeless, genre-defying beauty. This bolsters Young Man of America as not merely a collection, but a genuine album. Individually, none of these tracks would make exceptional singles, but that is the point. These are songs that demand to be listened to within the context of something greater.

Even “Venus,” by far the album’s most poppy track, feels somewhat meaningless absent of context. On the chorus, Mitchell sings, “I’m not making any other plans, I just want to see your face again.” Without the spine-tingling, anguish of the preceding track, “Dyin’ Day,” the piece feels cheapened, and the full extent of this blissful triumph is lost.

The conclusion of this journey is also perhaps its peak. “Ships” plays like a placid, pastoral reverie. But it never veers off into pretentiousness, retaining a sort of campfire-like sincerity. It shows that Mitchell doesn’t need to sound huge to sound powerful. She commands an atmosphere of her own. Almost a direct retort to the title track, it speaks to a perennially naïve American optimism that opportunity will come, you just have to wait until ‘your ship comes in.’

These pieces air humility and pastoral homeliness. Maybe that is because Mitchell has never truly ascended beyond her humble beginnings. She is a relatively obscure, albeit critically adored, well-educated thirty-something trudging along a busy tour circuit of coffeehouses, downtown bar venues, and the occasional theater.

But, this is centrally why Young Man in America is so brilliant. Mitchell feels unscathed by misguided ambition and utterly transcendent of label pressures or fan expectations, and this rawness bleeds into her quality of her work. I get this sense, that while Young Man in America is certainly thematically rich, that Mitchell is not over-thinking these tracks. She’s just gliding along, impetuously following what feels right.

Young Man in America is the work of incisive social criticism and raw authenticity. It is the best album I have listened to this year, and placed against the recent stream of Pitchfork-darlings, this feels even truer. Anais Mitchell has released an album that is above trendy. It is a rare album that touches upon the world we live in, while simultaneously perched in a world of its own.