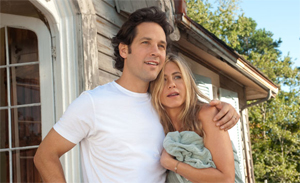 Although 'Wanderlust' started out with potential, the film's poor plot and stale jokes quickly caused the movie to fall flat, despite the presence of hollywood veterans Paul Rudd and Jennifer Aniston. WANDERLUSTMOVIE.NET

I almost feel bad for relating how I really feel about this flick because I went into it with such high hopes, but truly, this one stunk.

In the equation of movies, this one made sense. Paul Rudd plus Jennifer Aniston plus quirky premise equals good movie? That’s what we all hoped.

What started off as a creative spin on the classic rom-com spiraled into exaggeration, and what seemed like painfully scripted antics had me begging for the credits to roll.

Paul Rudd and Jennifer Aniston are a overworked Manhattan couple that suddenly find themselves out of work and at odds in their relationship. Their only option is to move in with Rudd’s caustically obnoxious brother Rick.

Along the way, they stumble upon a laid back hippy commune called Elysium which seems to be exactly what the stressed out duo needed.

At first the stereotyping of both Rick (the commercial polo wearing suburban d-bag) and the Elysium (dirty nudist vegan hippies) seemed a delightful contrast.

Quirkiness abounded and the film seemed to be heading the right direction. However, not even Rudd’s sarcastic and relatable style of situational humor could pull this film out of the crapper.

The true issue with the film is that despite a creative and unexplored premise the film squished all of the plot development into the final third of the film.

In the first third I was delightedly optimistic. The second third I started to notice the jokes were getting old. In the closing portion however, I was biting my lip, checking the time and coming to grips with the reality that this movie was awful.

The actors did their best; truly this film was neither Rudd nor Aniston’s fault. Director David Wain needs to be sat down…. Immediately. So much potential with so little substance left a bitter taste in my mouth.

A handful of low caliber one liners and an eclectic cast of funny people just can’t overcome the poor plot development. If beating a dead horse was a crime (which it may very well be) everyone who green-lighted this movie should go to jail.

To put it metaphorically, this film was like a kid with all the potential in the world who tried meth, and as we all well know, you can’t try meth, not even once. This flick is a C-, don’t see it. Just imagine that it was good and go with that.