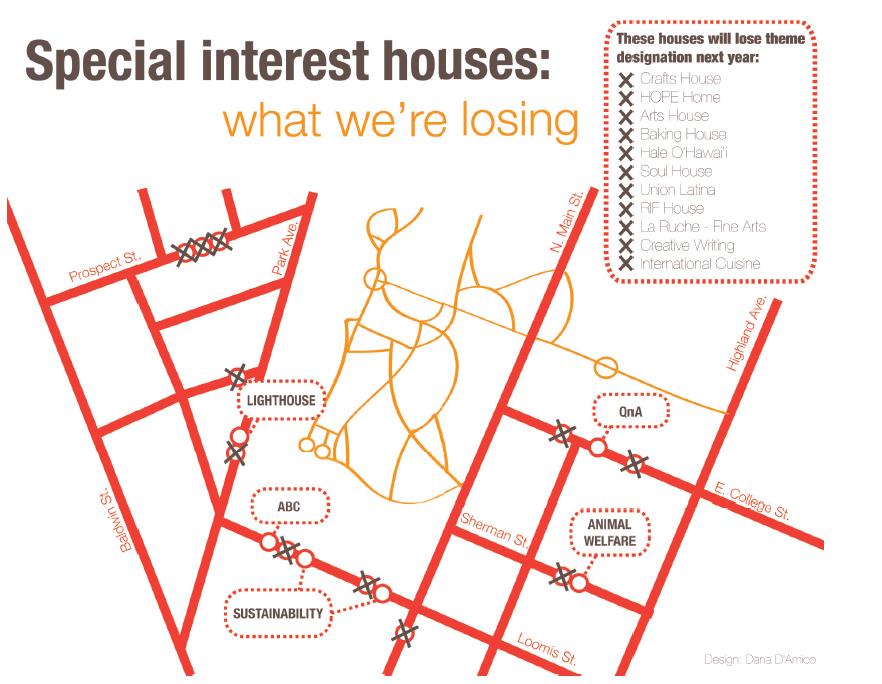 Next year there will only be nine special interest houses on campus, a decrease from the 17 houses the college currently sponsors.

Out of 17 applications, five house proposals were accepted for the 2012-2013 school year.

Only twenty-three percent of the 637 students that responded to the survey felt that there should be less special interest housing, according to Nicole Piccirillo, ‘12, director of student affairs.

The Musicians in Meadville and Student Experimental Theatre houses are the only two of the five approved houses that are new to campus.

Since just five of the seven potential houses were filled, the two remaining houses will be included in the room selection process for a total of 15 college-owned house options in the 2012-2013 year.

Hall said that students first submit an application with their proposed house theme. They are then given the opportunity to present their ideas and a mission statement to a committee made up of Residence Life faculty, staff, residence advisors, and an ASG representative.

“We review past performance, new ideas, creativity, and ideas that can easily be integrated into the campus community,” said Joe Hall, assistant director of Residence Life, in an e-mail.

There are four additional special interest houses, ABC, Social Justice, Queers and Allies, and Sustainability, that were not included in the special interest proposal process but will still be present next year.

The committee offers some special interest houses a three-year reapplication process alternative, which was applied to these four houses. Hall said that the decision to extend a three-year alternative to houses is based upon a strong review of past performance and the importance of those particular organizations on campus.

Under this alternative reapplication, selected houses must only reapply every three years.

Hall said approximately 65 students lived in special interest housing for the 2011-2012 school year. Houses can accommodate anywhere between three and seven students. He said that many of the current houses did not reapply for next year.

Houses can accommodate anywhere between three and seven students. He said that many of the current houses did not reapply for next year.

“There are no financial benefits to these specific communities,” he said. “The houses are there to provide programming and educational opportunities to students and the community.”

Katie Horan, ’13, and Liz Lennon, ’13, have lived in the Animal Welfare house for the past two years.

They said that four officers from the Animal Welfare club resided in the house before them. Horan and Lennon applied for the house their sophomore years, along with two other club members.

“The first year we were worried because we were all new people applying and were unfamiliar with the requirements of a special interest house as well as the application process,” Lennon said. “It was certainly made easier, however, by the fact that the house was already in existence.”

The Meditation house, though present in years past but not this year, was one of the five proposals accepted for next year.

Neither Lennon or Horan could remember filling out questions regarding special interest housing, but both agreed that the number of houses should not be reduced.

Katrina Hohlfeld, ’13, also applied for special interest housing for 2012-2013. Her and her three friends’ idea for a “Cultural Cooking House” were rejected.

“We came up with it because we all love to cook, come from different cultural backgrounds, and currently have insufficient kitchens,” she said. “The idea revolved around having open houses where we could present the campus with one style of cooking and explain a bit about how food operates in the social fabric of that specific culture.”

Hohlfeld said that she thought their presentation before the committee went well. She said that the committee asked a question or two before thanking and escorting them out. She also said there was no explanation as to why their proposal was rejected, just that many groups had applied for few spaces.

“While we were disappointed, we were not shocked by this decision,” Hohlfeld said. “This is not the first time that residence life has failed us. Honestly, it’s hard not to take it personally when no explanation is given as to why someone else received funding for their ideas.”

Hohlfeld said that she was frustrated by the room draw process, but because she would lose her financial aid in living off campus senior year, she will endure it again.

“If student feedback indicated that they wanted to cut special interest housing, it is because the houses that exist have not proven to have the effect on campus that they are supposed to,” she said. “Honestly, that’s a shame, because I know my roommates and I would have done something special and would have really appreciated that house.”