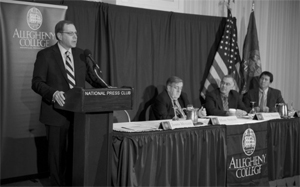 President Mullen addresses the group while Mark Shields, David Brooks and Dan Shea, director of the Center for Political Participation, look on. PHOTO COURTESY OF THE NEIMAN GROUP

By recognizing prominent national figures in the Prize for Civility in Public Life, the college aims to also promote civility within the campus community.

“Civility is fundamental to everything we should be about at Allegheny,” Mullen said.

Mullen hoped this awareness of discourse will spread to the Allegheny campus community.

“I hope each of us will get up every morning and continue to think throughout the day how we can engage discussions on campus in a manner that is civil and respectful,” he said.

“You can disagree without being disagreeable. You can be congenial and you can even be friends,” Mullen said. “Brooks and Shields are all of that including good friends.”

For Center of Political Participation Fellow Alex Sproveri, the award put a spotlight on Allegheny by creating national attention and awareness on campus.

“It will bring more attention to the issue here, especially given all of the recent Campus Alerts,” said Sproveri, ’13. “I think students could do to look at how we conduct ourselves as well.”

Most recently, Dean of Students Joe DiChristina sent out a campus-wide email asking students to be respectful of Meadville neighbors at night.

“I do expect that students will conduct themselves as good citizens both on and off campus,” he said in the email.

A Campus Alert sent Jan. 20 notified students of the defacement of a poster of a transgender speaker coming to campus.

For President Mullen, the award resonates with the college’s mission to prepare students to be good citizens and the recipients showed that kind of citizenry.

Sproveri, who attended the presentation along with three other student fellows, echoed Mullen’s sentiments.

“Given today’s media environment, Brooks and Shields represent two people that are very ideologically opposed yet still are able to conduct themselves in a reasonable manner and actually have discourse while discussing a topic,” he said.

Dan Shea, professor of political science and director of the Center for Political Participation, saw a change in the tone of politics from 2008, when young people became engaged with the Obama election, to now, when turnouts are decreasing.

“We began to think ‘What is it that’s happening? Why would young people step onto the playing field and then retreat to the sidelines?'” he said. “Then we began studying this issue of civility.”

The civility award rewards people in the public eye for the tolerance of other people and their ideas.

“You can’t dive too deep into the causes of the growing vitriol without being media pundits into focus,” Shea said.

“When we can find journalists commentators pundits that are doing it right, it makes sense that we would recognize them. And maybe tell the rest of America that this is the way it should be done.”

As journalists, David Brooks, a New York Times columnist, and Mark Shields, a national syndicated columnist, reach many Americans with their political opinions.

“Every week they come together, one a liberal and one a conservative, and they discuss important issues and conduct themselves with civility and grace,” Mullen said.

By choosing prominent and public figures, Shea said that he and the rest of the selection committee, made up of Mullen and trustees of Allegheny along with active leaders in the political and business communities, look for fervent people in the public eye who behave graciously.

“We want to accentuate their positions and provide people with good role models,” he said. “They care deeply about their concerns but at the same time can appreciate the validity of the other side.”

While Allegheny thrust itself into the national spotlight by drawing attention to civility, the same objective exists close to home.

“Any time we draw attention to this issue of robust political participation within the framework of a respectful dialogue, it’s good,” Shea said. “And that’s what the mission of our college is: to create good citizens.”